Over the Line Review: ‘Church’ 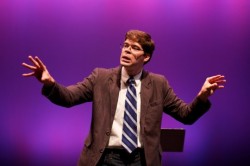 Despite the fact that the Christian religion is a highly organized affair, it is nonetheless a deeply personal experience. Each Christian—devout, conventional, or fallen—has his or her unique relationship not only to God but also to the religion, language, and rituals that bind him or her to Him. So, when I heard that Forum Theatre was producing a play by Young Jean Lee entitled Church, I was curious. Here was a playwright and a theatre willing to tackle one of the most contentious issues of our day. What approach would the script take? What approach, the theatre?

Church begins in the dark, with a convincingly delivered monologue castigating humankind’s daily trivial, and perhaps solipsistic pursuits. It does so with such directness and candor that we in the audience cannot help but laugh. How foolish we are to worry about affairs of the ego or to seek recognition and/or praise from other people for our efforts, the speaker tells us. Then the lights come up and the contrast could not be greater: enter four lovely reverends—kind, welcoming, and smiling—greet us, presenting themselves as tolerant, liberal, and understanding of our fears and doubts. Suddenly, we are ready for the ride, which—if the opening monologue is any indication—will zigzag between discomfort with our humanism and possible glory in our surrender to God. 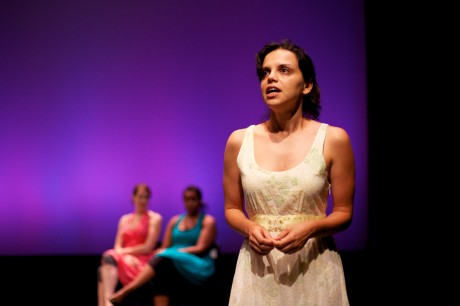 Unfortunately, however, Church does not fulfill that promise. Rather, the script sputters between the authentic and the absurd, between the sincere and the satiric, all the while leading us nowhere, though indeed ending in a heavenly choir. For unlike a service, or a revival, or almost any other Christian function I have attended in my life, this church “service” does not seem to have an underlying objective. It is not trying to save us, or redeem us, or cleanse us, or even gently remind us of our faith. It seems content to witness to us, not authentic conversion experiences, but a thoughtfully benign, even if occasionally twisted, representation of Christian evangelical identity. That representation does not, however, succeed in stimulating the kind of thought and discourse Forum says it hopes to accomplish. And not even the show’s glorious deus ex machina ending can save it, though I will admit to a sudden urge to start rocking in the aisles.

The show’s lack of cohesion is not the fault of its actors, however, who all deliver credible, engaging performances. Nora Achrati as Reverend Nora captures with pure conviction and a steely edge her pre-saved life as a drugged out, promiscuous young woman preserving aborted fetuses and drinking chicken’s blood. Blair Bowers as Reverend Blair looks and feels like she just walked out of the heartland with a bible in one hand and a baby-to-be in the other. Anastasia Wilson as Reverend Stacy feels the pull of temptation and doubt with such absolute sincerity that we might all want to reassure her. And Kevin Hasser as irrepressibly sly Reverend Jose bursts with love and jubilation, even as he delivers some of the strangest, most inexplicable parables imaginable. Separately and together, they engage us in their somewhat inexplicable testimonies while standing before a beautifully hypnotic scrim.

…though I will admit to a sudden urge to start rocking in the aisles.

Both playwright Lee and director Michael Dove have spoken about their personal relationship to the subject of religion in general, and evangelical Christianity in particular. That personal relationship is what motivated their interest in writing and directing Church, respectively. T. S. Elliot, no stranger to religion and its questions, freely used his personal anguish over the subject to propel his poetry. He, however, urged artists to push past personal emotions and personality so as to make their art universal. I’m afraid that’s not what happened here. As a result, neither the experience nor the perspective rang true enough to this viewer—with my own evangelical family experiences—to sound that universal question. Instead, I left the theatre with vague impressions about what it was I had actually witnessed.

Forum’s Church is a part of Round House Theatre’s Over the Line Festival now playing at its Silver Spring location, 8641 Colesville Rd. For ticket and schedule information click here.