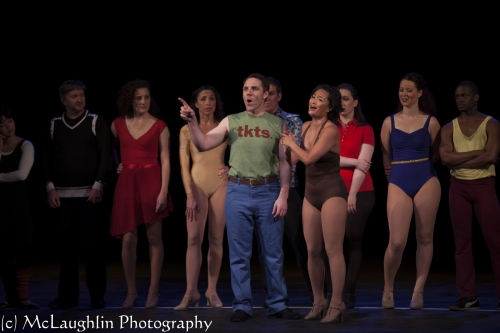 Rockville Musical Theatre’s production of A Chorus Line, originally written, directed and choreographed by Michael Bennett, is a faithful rendition of this Broadway staple.  While the show’s plot line is thin, its depiction of the quest for stardom and its many musical solos make it a natural fit for this long-standing community theater.

The Rockville Musical Theatre actors do a good job expressing each character’s individual personality and fears.

The opening musical number, “I Hope I Get It,” gives the audience a glimpse of a typical chorus audition for a 1970s Broadway musical and introduces most of the characters.  Though diverse, they each live to dance, and it is through dance they are able to express their true selves. 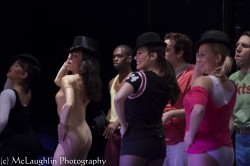 The cast of ‘A Chorus Line.’ Photo by Mark McLaughlin.

As the play progresses, the Director, Zach (played by Jivon Lee Jackson), encourages each auditioner to dig deep and expose the real reasons they were drawn to a career on the stage.  The Rockville Musical Theatre actors do a good job expressing each character’s individual personality and fears.  Husband and wife team Al and Kristine (played by Mark Hamberger and Catherine Oh) are a joy to watch performing “Sing,” in which Al supports Kristine by filling in missing words and notes while she confesses her insecurities about her inadequate singing.

The ensemble struggled at times with the rigorous choreography and vocals, but standout Taurean Maray Barber, who plays Richie, is a talented dancer and singer. He is believable as a performer ready to make it big on Broadway.

A Chorus Line ends with the classic song “One,” which is the only musical number in the production set on an actual Broadway stage.  The cast members shine in gold top hats and tails, but the finale itself lacks similar luster. In the end, this earnest production does not quite radiate the energy necessary to achieve stardom.

Running Time: 1 hour and 40 minutes with one intermission.

Rockville Musical Theatre’s A Chorus Line runs through Sunday, July 22, at the F. Scott Fitzgerald Theatre at 603 Edmonston Drive in Rockville.  Friday and Saturday performances are at 8:00 pm, and Sunday performances are at 2:00 pm.  For more information, call the box office at 240-314-8690, or visit online.