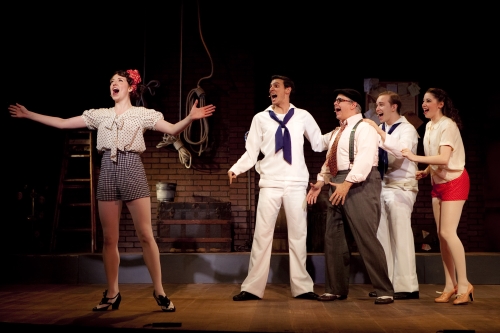 Dames At Sea is running at the Infinity theatre Company in Annapolis through August 5th, and you’d better buy your tickets soon, because if there is any justice in this world, it will sell out quickly.  It’s an excellent production of a fun show.

It was written in the tempestuous 60s, amid the Vietnam war, the civil rights movements, drugs, and other things. So, it’s appropriate that it’s making a resurgence now.  From script to production, the show makes no attempt at realism. It’s meant to be escapist, diverting, fun, and an homage to the Busby Berkeley extravaganzas of the 30s. You know: Small town Girl comes to the big city with stars in her eyes, Boy meets Girl, they instantly fall in love, Other Woman tries to steal Boy, Girl thinks Boy is betraying her, etc., etc.  And there’s the Other Girl who takes Girl under her wing. (This is the role Ann Miller would play.) You’ve also got the hardboiled director who’s really a sweetie. You’ve even got the Bulldozers at the door. Confusion and hilarity ensue – plus lots of great singing and dancing – and everybody ends up married to the right mate and they all live happily ever after. Dick – Boy – sums up the absurdity with: “Well, Ruby [a nod to Ruby Keeler], this morning you were on a bus, and now you’re the sweetheart of the US Navy. How does it feel?” To which Ruby replies, “It feels nice.” 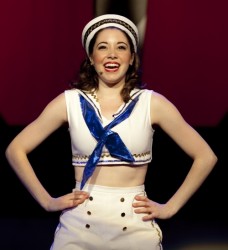 Infinity Theatre’s production was directed and choreographed by three-time Tony nominee, Randy Skinner. He’s brilliant. I’m not going to say anything more specific about his work; just know that when everything in a production works and it all comes together so incredibly well, it’s to the director’s credit, even if he did a superb cast and crew to work with.

Being as 2-dimensional as the characters in this story are, they are deceptively difficult to play. The actors have to make them a cliché, yes, but still believable. When done well, it looks like the easiest thing in the world. It ain’t. Trust me. But these six make it look like a walk in the park. Kristie Kerwin’s Mona Kent rules the show-within-a-show perfectly without making us hate her. When she falls ill and Ruby has to step in and save the day, you almost believe she’s got a heart when she tells her to “be so good that I’ll hate you forever.” There is a wonderful bit when Mona hears that her name is spelled wrong on the marqué. She stalks off stage, then comes back…with a ladder and a “don’t nobody mess with me look,” continuing off stage with the ladder and presumably outside, to climb up and fix the letters, while the others simply stare. In the hands of a lesser actor, that might have looked silly. Instead, it’s one of the best bits I’ve seen. She’s not physically right for the part – she should be older and taller – but nobody cares because she’s just so good.

Megan Kelley was dead on as the small town sweet young thing, seeking fame and fortune in the big city. Her sweet voice is even perfect for it, and she’s got lightening-fast feet. But no matter how fast she went, the taps were always clear and distinct.

Eric Huffman plays Dick’s naïvety – Dick is Boy – so well that you can almost believe he falls madly in love simply because he walks into the theater just in time to catch Ruby as she faints from hunger (that is basis of their undying love). Mr. Huffman is also a strong singer and a heckuva dancer.

Joan (Ann Miller) is a thankless role. She’s not the lead, she’s not the ingénue, but she’s the one who holds everything together. And she’s so lovable, you have to bring in a love interest for her (that’s the Jules Munshin character). At least, she is in the hands of Darien Crago, who is also a terrific dancer.

Cody Davis plays Lucky (Jules Munshin). It’s a difficult role in the same way Joan is, but that didn’t seem to get in Mr. Davis’ way. He’s just superb. He’s a strong enough actor to, along with Joan, hold everything together, and he’s got a wonderful voice that he uses to perfection. His feet are pretty darned fast, too. He may be as good a dancer as Ms. Kelley and I just didn’t appreciate it. Come to think of it, Mr. Huffman may be, too.

Hennesey, the Director, is such a cliché that he holds no surprises. Like slapstick, there is no suspense, the artistry comes from it being perfectly played with absolutely perfect timing. Erick Buckley did exactly that. He breaks into a dance step or two so unexpectedly and stops just that quickly that you’re not sure what happened. It’s great. And he’s an excellent dancer with a strong, steady voice.

As I’ve indicated, the voices were great across the board, but there were some issues. Ms. Kerwin opens the show with a number called “Wall Street,” and it’s hard to imagine a more dynamic opening. She has a powerful instrument and she has excellent control of it, not a sigle weakness in evidence. This girl a formidable triple threat (singer-dancer-actor). It must be said, however, that you could not always catch all the words when she sang. 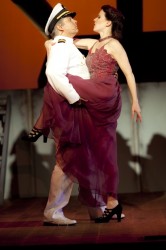 Ms. Crago and Ms. Kelley were better at this, but they had their moments. The men were clear throughout, but that is typical.  Physiologically, it is easier for men to be clear in the higher notes. It sounded, too, as though some of the songs did not sit properly in these two women’s voices. Some notes were weak, and it’s not because they were out of their ranges. It sounded as though they should have been transposed a key or two. But again, all the voices were strong, well-controlled, and wonderful to listen to.

So, you’ve got speaking, singing, tapping, and the band, and they all have to balance, no one element drowning out any other. Achieving that balance is a daunting task, but sound designer Wes Shippee (I’m not making that up) did it splendidly. However, the band may not have measured up to the standard of perfection this show set for itself. They were very good, but they did occasionally overpower the actors. And there were strident tones. I think it was the trumpet, but I can’t say for sure.

As for the set, maybe I wasn’t paying close enough attention, but it looked to me like they were tapping and walking in tap shoes but without tapping on the same surfaces. I don’t know how you do that, make it seem like wood one minute and carpet the next. I’m crediting Scenic Consultant Jake Ewonus for that. I didn’t notice the lighting, which means Co-Designers Anshu Bhatia and James E. Lawlor III did a really good job.

Everybody did a really good job. If you like musicals at all, you really ought to get yourself down to see this. Be very clear this is not community theater; this is professional, it’s Broadway talent and quality. But they also hold local auditions. It’s important to support this kind of theater if we want to continue to see this kind of work and work that gives local talent a chance, too.

Dames At Sea is playing through August 5th Thursday–Saturday evenings and Thursday and Sunday matinees. Fri–Sat @ 8; Thurs @ 2 and 7; Sun @ 2. The theater is at 1661 Bay Head Rd. Annapolis 21409, at the CTA Theatre Complex (the sign from the street says Children’s Theater and you will see playground equipment.) It is easy to find, but the web site has directions. Buy tickets here or call 877-501-8499.