The cast of ‘Legally Blonde, the Musical’ at Toby’s Dinner Theatre of Columbia. Photo by Kirstine Christiansen.

Never mind that you may not be apt to hum the melodies from Legally Blonde, the Musical as you exit the theater. Ignore the fact that the content defies modern social consciousness and plays on a multitude of stereotypes: ditsy blondes, shallow sorority girls, trailer park folks, blood-thirsty lawyers, gays, lesbians, and even UPS delivery men. Forget that the plot is improbable at its core. But with Legally Blonde, the Musical, currently playing at Toby’s Dinner Theatre of Columbia you will be hard pressed to experience more fun over a span of two and a half hours.

From the rousing, high energy number “Omigod You Guys” performed by a spunky, talented ensemble that kicked off the show to the very last scene, Legally Blonde will have you hootin’ and hollerin’ throughout. While the melodies composed by Laurence O’Keefe and Neil Benjamin in this romantic comedy aren’t always tuneful, that minor deficiency is more than made up by the clever and hilarious lyrics that the duo penned as well as the book by Heather Hach that tell the story of a stereotypical airhead blonde sorority sister who stays true to herself and follows her dreams. 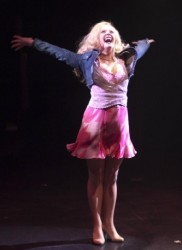 Legally Blonde, the Musical is a story based on the novel Legally Blonde by Amanda Brown and the popular 2001 film by the same title. It opened on Broadway in April 2007 and experienced some success during the course of its 18 months run including a week where it grossed over $1 million. It was nominated for 7 Tony awards but did not garner a win among them. The production also experienced a solid run in London’s West End. Additional success occurred when the show took to the road.

The plot focuses on Elle Woods (played exceptionally by Jessica Lauren Ball), the blond Delta Nu sorority girl with a penchant for anything pink who just got dumped by her handsome boyfriend Warner (Austin VanDyke Colby) to be with someone more “serious” (Vivienne, played by Beth Rayca). Warner is already a Harvard Law School student, and Elle decides to follow him there with the hopes that he would see her as serious. She manages to be admitted not by her personal essay but her headshot and an energetic cheerleading squad that accompanies her in the admissions office.

While others see Elle as not serious and inappropriate for such a prestigious institution, her gift for understanding real people with the help of a beautician, Paulette (Priscilla Cuellar) impresses Professor Callahan (Munsey) and his assistant Emmett Forrest (Jeffrey Shankle). It is the latter who explains that that her pursuit of Warner is what’s keeping her from earning his respect. Elle surprises her classmates and professor by showing off her newly discovered legal chops and helps win a high profile criminal case. It is during the trial sequences where the most uproarious moments take place.

There are many twists and surprises in this romantic story, and we’ll leave it there so that the audience can fully enjoy this production.

Ball as Elle demonstrates why she is Broadway-caliber. I believed that when she played Sandy in Olney’s production of Grease last year and even more so as Maria in The Sound of Music. A sparkling voice and personality propel her as the perky Elle. She is the real deal and a star in the making.

Jeffrey Shankle as Emmett is solid, earnest and believable. Priscilla Cuellar as the beautician, Paulette, not only sang “Ireland” beautifully but her character was so likeable that everyone would want to sit down and reveal their problems to her knowing you would get sage advice. Cuellar played her role perfectly.

Austin VanDyke Colby as Warner brings a terrific baritone quality (“Serious”), and his matinee idol (do we still use that phrase anymore?) good looks is eye-catching.

Then there is Larry Munsey. He is as much a fixture at Toby’s as the delicious buffet itself. In playing Professor Callahan, one would think the role was written expressly for him. Munsey, as always, possesses commanding stage presence and superb acting instincts; he is a total joy to observe. 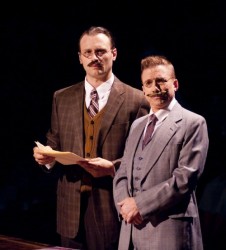 And oh, the dancing! This highly charged production is dominated by spirited choreography throughout thanks to the talented company and the direction of Mark Minnick (Hairspray, Nunsense, Grease, Oklahoma, West Side Story). The jump-rope production number “Whipped into Shape” that leads off the second act is eye-popping and brought the house down. It is cleverly intended to be a fitness video, and I only wish it was actually on video.

As mentioned earlier, the songs’ lyrics are their strength. Notable numbers are “Omigod You Guys,” “What You Want,” “Blood in the Water,” “Ireland,” “Bend and Snap,” and “There! Right There!” All of these were performed wonderfully.

The latter is my favorite and judging by the audience’s reaction, many other felt the same way. It should have been titled “Gay or European.” It contained more hilarious gay stereotypes in that one number than in the entire production of La Cage. I’m not a proponent of any kind of stereotyping, but this was sheer fun and joy bringing laughter throughout.

Scenic Designer David A. Hopkins presented a plethora of sets that were spot-on for each scene. The courtroom set-up is particularly solid and functional. And the staging of scene changes was remarkably seamless using all of Toby’s round stage and all four corridors.

Larry Munsey’s costumes are, in a word, extraordinary. There were so many costume changes one would think this was a full feature film. Besides the “normal” wardrobe worn by the company, Munsey offered pilgrim costumes, Christmas attire, prison suits, costumes for a Greek chorus, Elle’s wonderful outfits, a tight-fitting uniform for the UPS guy Kyle (Adam Grabau) and too many more to mention.

This production of Legally Blonde, the Musical has everything. All the audience needs to do is sit back and watch a wonderful cast and crew executing their craft with precision and excellence.