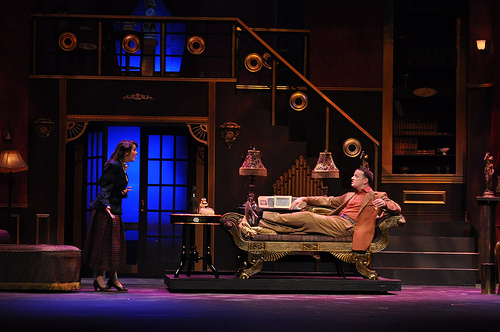 The Cockpit in Court Summer Theatre’s production of Sunset Boulevard, directed by Eric J. Potter and with Musical Director Terri Mathews, was unquestionably created to showcase the talents of lead actress Nadine Haas Wellington.  This veteran performer shines with every stunning note and every elegant movement.

Sunset Boulevard is based on Billy Wilder’s 1950 film of the same name about faded silent movie star Norma Desmond, who lives in a house on the famous Los Angeles street of the title.  In her desperation to return to the limelight, she uses riches and promises of fame to convince a young screenwriter, Joe Gillis, to work on her bloated, ill-constructed script.  Norma pushes their relationship forward by dragging Joe from the room over her garage to the bedroom of her ex-husbands and finally to her bed.  But this May-December relationship is destined to end in disaster. 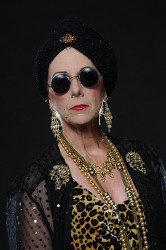 With music by composer and producer Andrew Lloyd Webber and lyrics by Don Black and award-winning playwright and screenwriter Christopher Hampton, there are a few standout songs.  Wellington soars in “With One Look,” in which Norma recounts her former glory.  Tom Burns as Joe was believable as the down-on-his luck screenwriter belting out the harder-edged song “Sunset Boulevard” to open the second act. Kelsey Lake, as Joe’s young screenwriter love interest, Betty Schaefer, is a joy to watch and hear whenever she appears on stage.

The Set Designer, G. Maurice “Moe” Conn constructed a residence that is as grand as Norma herself.  Her walls are covered with black-and-white photos: monuments to her long and successful movie career.   Golden lounge chairs, sparkling lamplights, and a magnificent staircase all help convey her fierce determination to remain a Hollywood goddess.  Costume Designer Wil E. Crowther cannily enhances Norma’s opulent, fictitious world with his selections of luxurious fabrics and glitzy accessories.

This veteran performer shines with every stunning note and every elegant movement.

Sunset Boulevard premiered in London at the Adelphi theatre in 1993, with Patti LuPone in the role of Norma.  Both the show and its leading lady received nominations for the Laurence Olivier Award, and the musical ran in London for four years, with Elaine Paige, Petula Clark and Rita Moreno each taking a turn playing Norma.  A U.S. production of Sunset Boulevard starring Glenn Close opened in Los Angeles in 1993 and went to Broadway the following year.

Sunset Boulevard plays through August 5, 2012 at the Mainstage of Community College of Baltimore County at 7201 Rossville Blvd., Baltimore, Maryland.  For more information and to buy tickets please call the box office at 443-840-ARTS (2787) or online.