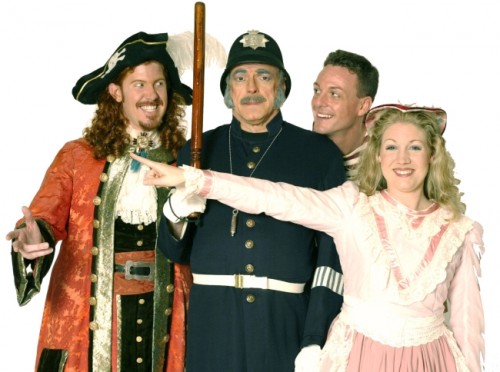 The cast of the New York Gilbert and Sullivan Players’ production ‘The Pirates of Penznace.’ Photo courtesy of Wolf Trap.

No doubt, the sweat will be dripping; the throat, craving liquid refreshment; the face, a splash of hydrant; but the ears—oh, the ears will be leaving Wolf Trap’s Filene Center satisfied beyond compare.  The New York Gilbert and Sullivan Players’ production of their namesake’s Pirates of Penzance: or the Slave to Duty is guaranteed to quench whatever thirst you might have for the musically whimsical or the whimsically absurd.

First produced in New York’s Fifth Avenue Theatre in 1879, in many ways Pirates is a truly modern musical.  With this two-act comic opera, Gilbert and Sullivan created a playful world that is utterly loosed from its rational moorings.  In it, duty trumps good, pirates never make any money, people buy birthrights, and being an orphan is a get-out-captivity-free card.  And, of course, Queen Victoria is a deus ex machina—minus the crane—whose mere presence will save us all from impossibly comic situations.

The Players’ production of Pirates takes advantage of every bit of the script’s inherent zaniness, giving us a trove of sight gags and irresistible muggings, a dose of inventive choreography, a shake or two of hilarious improvisations, and one out-of-control Shakespearean clown who threatens the world with chaos.  Director Albert Bergeret expertly blends each ingredient into the mix.  He even manages to throw in a couple of topical references to Homeland Security and No Child Left Behind.  The result is an audience in a constant state of anticipation, not so much about what will happen next in the story, but about what will happen next among the actors and their characters on the stage.

Which is exactly how it should be, for Pirates is not about the story; it’s about the characters and their songs.  And the cast and musicians assembled for this production deliver the goods.  From the opening number, the orchestra never misses a beat, expertly bringing Sir Arthur Sullivan’s score to life.  The actors play Sir William S. Gilbert’s libretto with no less command.   They present a solid ensemble, many having had the blessing of working together for many years, and that familiarity pays off with ease of repartee.  Yet, too be sure, there were some standouts.

Daniel Greenwood plays the protagonist Frederic with complete comic book enthusiasm.  Not only does his big voice ring loud and clear on every song, but when he smiles or pouts his expressions are so endearing that you can’t help but look, and look.

Frederic’s love interest, Mabel, is played beautifully by Sarah Caldwell Smith.  In her first number, “Oh, Is There Not One Maiden Breast”—her exquisite voice stimulates us almost as much as it does poor Frederic.  In fact, ironically, in latter numbers the operatic splendor of her voice sometimes left us straining to understand the words, until we joyfully surrendered to its charm and abandoned any need for words in her flute-song. 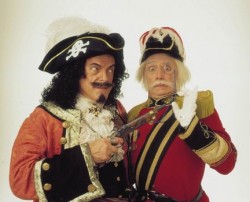 One of the funniest characters in the show was offered by dance captain David Auxier as the Sergeant of Police.  Tall and sublime, Auxier’s antics are hilarious as he struggles mightily to keep his motley group of Keystone cops in line and focused.  At one point our Sergeant even has to step outside the play to enforce obedience with the orchestra’s percussionist.

Finally, James Mills plays Major-General Stanley with a put-a-grin-on-my face child-like litheness.  His and the show’s signature song, “I am the Very Model of a Modern Major-General” was delivered with total verve and succinctness; in the end Mills pattered so rapidly yet so clearly that the audience couldn’t help but be amazed.

Several musical numbers really impressed with their inventive choreography and comic spirit.  In “How Beautifully Blue the Sky” the girls—arrayed with parasols, croquet mallets, and badminton rackets—eavesdropped on their sister’s love chat with Frederic with the subtlety of a locomotive on tiptoe.  Near the end of the performance, in “Hush, Hush! Not a Word” the entire ensemble captured the dream-like absurdity of the show by delightfully abandoning any semblance of coherence.

The production’s scenography supported the show’s comic absurdity with sheer simplicity.  With a rocky seashore on the coast of Cornwall and a ruined chapel by moonlight (with crypts renamed after their new owner), Lou Anne Gilleland’s sets provided clarity to the stage pictures.  On the other hand, Gail J. Woffard offered the audience an array of costumes that are as functional as they were visually appealing.

So if you have a hankering for a bit of a musical romp, brave the heat and the elements and go out to Wolf Trap!  Take a cold beverage (even a bottle of wine is permitted on the lawn) and experience a masterpiece of comic ingenuity done masterfully. If you’re lucky, you might even get treated to a masterfully concocted thunder and lightning storm with tornado inducing winds right as the curtain closes, almost as if to say, “Take that Queen Victoria—deus ex machina indeed!”

Of course, if tonight you are committed to staying at home with your cool central air, don’t blame your eyes and ears if they wage a bit of a protest.

Running Time: Two hours and 30 minutes, with one 15 minute intermission.

Pirates of Penzance plays only through June 30 at The Filene Center at Wolf Trap National Park for the Performing Arts which is located at 1551 Trap Road, Vienna, Virginia 22182. Tickets can be ordered online or by calling Tickets.com at 877-965-3872. (The second night of performances was cancelled due to power outage.)