Cabaret Review: ‘What I See’ with Natascia Diaz at Signature Theatre 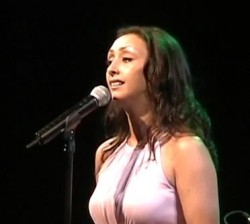 It is easy to see why Natascia Diaz has such a strong following. She is pure dancing, sparkling fire, limitless in energy, and a vocal powerhouse who leaves audiences energized and pumped.

I recently had the opportunity to experience Diaz, accompanied by some very talented musicians, in her cabaret show at the Signature Theatre, and I would love to see in her in the context of a full theatrical production. Ms. Diaz has such roles as the Spider Woman in Kiss of the Spider Woman, for which she was nominated for a Helen Hayes Award, and strong or lead roles in plays such as Brother Russia, Man of La Mancha, Rooms. and A Little Night Music to her extensive list of credits. She has established herself in both the New York and Metro DC areas, and is definitely an artist who should be on everyone’s watch list.

Notwithstanding, I had mixed reactions to the actual cabaret show itself. Ms. Diaz’s piercing, clear, and full-bodied voice shown best in the ballads, even though she had no trouble singing faster-paced belt and pop-style songs. She also had all the physical stamina needed to back up the near-rock songs. However, I would have appreciated a stronger connection to the audience not only in the ballads and the musical theatre pieces, but also in those relateable songs that happened in the second half of the show. It’s my personal preference of course, as Ms. Diaz seems to enjoy song-types that would not make my personal playlist.

Nevertheless, it was always fascinating to watch her. As I mentioned above, I was most impressed with her physical and vocal stamina. Her range, style, and pure vocal power can be compared to the likes of Melissa Etheridge, Sarah McLachlan and–dare I say it–Barbra Streisand. Her energy and enthusiasm for music is both awesome and contagious.

The show is entitled What I See, although I did not hear that reference among the songs. I also did not catch much of a running theme to tie the various songs together, other than her passionate love of the theatre, which she tells us has always been her “first love.”

Two pieces stood out for innovativeness and for showcasing her broad style. She brought the audience to her feet during a fast-paced song called “Happy Birthday Darling,” a song from the point of view of a proud mother watching her son grow up. She also made us all sway with recognition during her personal rendition of “Somebody That I Used to Know” by Gotye, which–unless you’ve been living under a rock for the past year–you’ve heard playing all over the radio and Internet. Her clear vocals and beautiful range both at the lowest and highest registers gave each song a distinctive flavor, and I look forward to seeing this performer again, many times, if I should be so fortunate!

…an artist who should be on everyone’s watch list.

While I’m not certain where this show will be next, I do know that you’ll have an opportunity to see Ms. Diaz again soon, at the Signature Theatre’s Open House Event on August 4, which will offer many free and family-friendly events all day.

To enjoy other cabaret performances by top-notch local and national performers, be sure to check out the Signature Theatre’s Sizzlin’ Summer Cabaret series from now until July 28th.