25 Years of ‘Shear Madness’ at The Kennedy Center 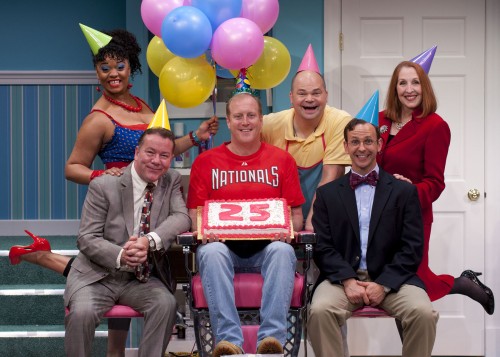 The Cast of ‘Shear Madness’ at The Kennedy Center. Photo by Margo Schuman.

What started off as a 12 week limited run at The Kennedy Center in 1987, Shear Madness, the interactive murder mystery is celebrating 25 years in its DC home this month. It is the second longest running play in American theatre history. The first happens to be its sister company in Boston, which has been playing for 30 years at The Charles Playhouse Stage Two. After going through 11,574 cans of shaving cream, 1,423 bottles of nail polish and 891 cans of hairspray, Shear Madness continues to delight audiences totaling at Kennedy Center alone over 3.1 million people. Audiences are enjoying Shear Madness all over the world as well and in the fall there will be a US tour presented by Troika Entertainment.

With a show running this long there needs to be a hand at the top watching over it. In the case of the DC production there is Bob Lohrmann who has been associated with the show since 1984 when he joined the Boston production. He then moved on to Philadelphia to perform the show there. As previously mentioned Shear Madness goes through a lot of shaving cream. Every night Lohrmann would end up taking the leftover half can home with him. He amassed quite a number of cans. In 1988 He called the writer and original director Bruce Jordan and said he was looking to get back into the show for a very different reason. Not only was he looking for work again but he ran out of shaving cream. Jordan said he had an opening in the DC company and Lohrmann has since played all of the male roles in the show in multiple productions. These days he oversees the production at Kennedy Center as Associate Artistic Director and has staged more than a dozen productions in the U.S. and Canada and has trained directors for productions in such worldwide locations as Croatia, South Africa, Brazil, Turkey, Puerto Rico and Iceland. I was surprised to learn that Shear Madness was originally written as a serious play. This was until Bruce Jordan and Marilyn Abrams saw Paul Pörtner’s original play and thought it could work as a comedy. After recently seeing the show I cannot imagine it any other way. 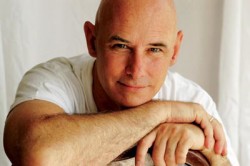 I had asked Lohrmann who he thought were the two longest running performers with Shear Madness. Because actors come into the show, leave for something else and come back it is never a consistent run. He does think that the current Mrs. Shubert at Kennendy Center Brigid Cleary is the longest running female and Aaron Shields who is currently Eddie Lawrence at Kennedy Center is the longest running male having played the show for 15 years now between DC and Chicago.

Some notable DC actors that have come through Shear Madness include Rick Hammerly, Tonya Beckman, Brian Sutow and Stephen F. Schmidt. Audry Wasaluski has been seen on Mad Men and West Wing. Lohrmann says Wasaluski at her audition almost was not cast in the show. The director felt she was not right for any of the roles. However her audition was so good they felt “How could you not cast her.”

He also says that audiences like to be engaged with participation and they most definitely are with Shear Madness. Because this is a murder mystery the audience helps choose the ending to the show every night. However Lohrmann says it is up to the audience as to how much they want to get involved. “We never pressure the audience.” “There are never any plants to help the audience along and we never know the ending until it happens.”

There is a story about Bruce Jordan having to go on for one of the female roles last minute after the actress got into a car accident in the Lake George production. Jordan played the role absolutely straight and the audience loved it. Lohrmann says “The audience will believe it if you play it real.”

When you see Shear Madness you might wonder “Hey are they making this up as they go along?” The show does change nightly depending on current events and is set in whatever day it happens to be. However (and this is a big however), the reality of who killed Isabel Czerny is the fundamental plot and that is played the same way every night says Lohrmann. The show then becomes an “accumulation of the actors creativity.” Current events are discussed in the dressing room before each performance and sometimes a new joke will work and become part of the show. Other times Lohrmann will come back to see the show and “take out the improvements.” “The work of the play is the murder before shifting over to the laughs.” says Lohrmann. “If you play it too broad it does not work.”

Why has Shear Madness endured for all this time? Is it because the audience is so involved? Is it because Lohrmann and long time Stage Manager Scott L. Hammer do an amazing job at preserving Bruce Jordan’s vision for the show? Or is it that people sometimes want to go to the theatre just to enjoy themselves. The answer to all of those questions is a resounding YES!! Whatever the reason, Shear Madness with its whodunit approach and well put together production will continue to keep audiences coming back to the Kennedy Center and other theatres for another 25 plus years.

Special Thanks: This feature would not have been possible without the enormous contributions of Kennedy Center publicist dynamo Stephanie O’Neill.

Note: The show is currently playing in The Family Theater space until sometime in November. It will then return to the Theater Lab after it’s upgrades are completed.