‘A Quick 5’ with Belen Pifel 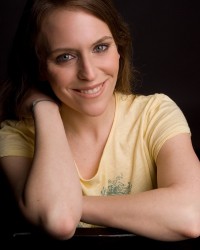 Belen Pifel is currently portraying Ivy Weston in August: Osage County at Keegan Theatre. She previously appeared at Keegan Theatre in Golden Boy. Stage credits include Volcanic in Origin at the Source Festival and Three Days of Rain and Pig Farm at First Stage. Film credits include Dinner at Eight, Uncertainty People and Green House. When not acting Belen can be heard singing with her own rock band Kid Goat. I enjoyed Belen’s performance alot in August: Osage County. It’s hard to play the only sane person against a dysfunctional family, but Belen does so wonderfully.

What was your first performing job?

The first professional production in which I was cast was a performance of one-act comedies (collectively known as “Comic Briefs”) with a local company called Renegade Theater.

Can you please tell us about your character in August: Osage County?

I play Ivy Weston, the middle of the three Weston sisters. Ivy’s the only one of the three who remained in Oklahoma; consequently, she became a care-taker of sorts for her parents. She’s been an immediate target of her mother’s emotional jabs for so long, I believe she developed an automatic reaction for evading confrontation (for the most part) and the ability to recognize a battle lost before anyone else does.

Had you seen August: Osage County prior to auditioning for the Keegan Theatre production?

No, I had not. I did want to see it when it was at the Kennedy Center a few years back but missed it.

August: Osage County is a very intense play. What is your nightly preparation process like?

Ivy’s appearance is uncomplicated, so outside of straightening my hair, there is little more I have to do than get into costume. The play is intense, but it’s also rhythmic; I don’t feel drained. Ivy’s also not as physically active a character as Barbara (Susan Marie Rhea) and Violet (Rena Cherry Brown) are. Before the show, I try to make sure I drink herbal tea and have a bite to eat. Backstage, I keep a large thermos of herbal tea, a bottle of water, and a huge supply of throat lozenges.

After August: Osage County where can we see you next?

As of now, singing around town with my band, Kid Goat.