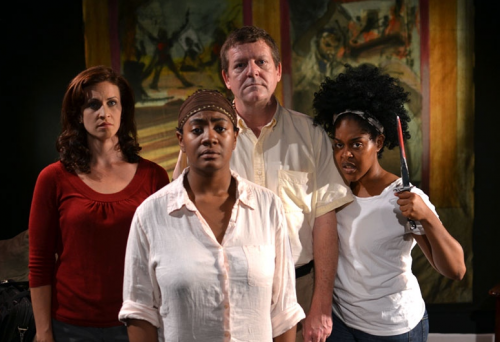 In 2007, riots erupted in Kenya as incumbent Kikuyu president Mwai Kibaki was reelected over expected winner and Luo Raila Odinga. In a Kisumu hotel, relief worker Jeff (Mike Ware) tries desperately to get home as images of violence, war, and brutality play out across his room window. But his separation from the events outside disappears as he pulls two sisters, Kioni (Ama Brown) and Louisa (Mahogany Ayot Eerised), out of the fray and into his life.

Passport, a Theatrical Mining Company production of a new play by Kevin Kostic, would be compelling by virtue of its subject matter alone. But Kostic goes further than depicting a city in chaos—he shows the real toll Jeff’s work takes on his marriage, the effects of poverty on women, and even touches on the AIDS epidemic in Africa. The setting shifts between Jeff’s hotel room and his DC living room, several months later, where monetary and marital concerns take the place of real life-or-death decisions—until Kioni comes back into his life, demanding to know what happened to her sister that fateful night.

If you couldn’t tell by the subject matter, this is an intense story—but it would be useless without the talent of actors and a director to bring it to life. The characters are very well-orchestrated, hitting precisely the right tones for each scene. In particular, Claire Bowerman’s effervescence and comedic timing as Jeff’s wife Nancy is fantastic, as is her transition as their marriage suffers from both Jeff’s job and his subsequent disillusionment. Eerised’s performance as dangerously volatile Louisa, whose righteous anger is overshadowed by her stubbornness, is borderline terrifying, while Brown’s Kioni is touchingly maternal. Ware is an excellent straight man to the chaos around him, but his dynamism, as Jeff changes from a man desperate to get home to a man desperate to help to a man desperate to forget, shows real versatility.

The characters are very well-orchestrated, hitting precisely the right tones for each scene.

David Cunningham’s exquisite set mural is a work of art in and of itself. Intended to be a picture of the view outside Jeff’s hotel room window, it is a marvel of color, depicting in broad strokes the violence and horror of revolution. The simplicity of the black box theatre, with its thrust seating, throws this piece into focus, so that every scene in Kisumu occurs with this backdrop of brutality, fire, and smoke.

This is not an easy play to watch. It covers many complex issues in a short span of time, leaving little breathing room or relief from its message. It is not, however, a message that Americans very often get to hear—what happens to a country we think we’ve helped, once we abandon it to its own devices? What happens to the people who try to help? And is it worth it?

Passport, part of the Baltimore Playwrights Festival, is playing at the Load of Fun Theatre, 120 W. North Avenue, in Baltimore, MD through August 26, 2012. Tickets can be purchased online.