BPF Review: ‘The Last Shall Be First’ 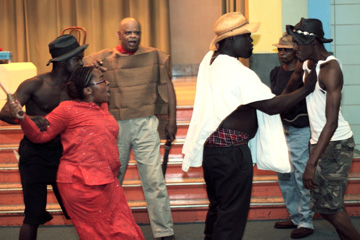 The final play in the Baltimore Playwrights Festival is The Last Shall Be First, produced by Heralds of Hope Theater Company, in residence at Sojourner–Douglass College.  The play is based on the story of the Nat Turner rebellion in 1831, even taking its title from a quote from Turner.  It’s a very interesting play, and worth seeing.

Percy W. Thomas has given us a well-written, thought-provoking story of slavery through different sets of eyes.  The story of the leader of Thomas’s fictional rebellion, Monroe, very closely resembles Turner’s, both in character and in action.  Turner did preach to the other slaves, as does Monroe.  He also saw visions he believed to be from God and did listen to them.  That’s what inspired the rebellion and when to do it, just as it guides the fictional Monroe.

Although no American is proud that slavery existed in our history, it is important that we remember and talk about it so that it never happens again.

The play starts by very effectively establishing the relationship between Monroe, played by Archie D. Williams, Jr., and his wife, Cherry, played by Natasha Marie White. They are a loving couple, like any other, except that legally, they cannot be married. (This is later contrasted with the Massa’s marriage, which is legal, but more for display purposes than anything else.)  Naturally enough, they object to being owned by another man, but Massa – whose name is Ezekie Potter (Richard Peck) – is a relatively good owner, he does treat them well.  Granted, he does it for business reasons – happy, healthy slaves work harder and increase profits – but at least he does it.  And he does consider them people, albeit in the lowest form.  He tries to communicate this to one son, Jeremiah (Micah Chalmer), even going so far as to say the overseer who was killed by Cherry’s sister (more on that later) brought it on himself by the way he treated them. It is a little difficult to imagine any slave owner saying a white overseer deserved to be killed, but the point is made.  Jeremiah is having none of this nice-guy attitude; he believes whipping is the way to control slaves.  Massa’s other son, Benjamin (Joshua Singer), is the polar opposite: small and compact where Jeremiah is large and loud, and believes slaves are people and should be treated as such. 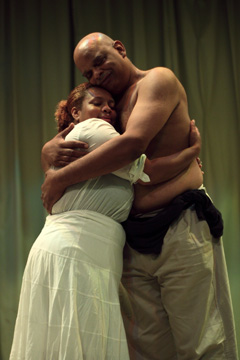 The meat of the play is Monroe planning and carrying out a take-over of the farm, which is discussed many times with a handful of other slaves whom Monroe trusts.  As with Nat Turner’s real story, they do it when Massa and family will be out of town for a few days, so it succeeds pretty easily.  Its scope was not as great as Turner’s; there is a surprisingly low body count, and it ends with Monroe forcing Massa to sign a document freeing all the slaves.  No surprises there.

The play is not about surprising anyone, though.  It’s about revealing the minds of those who own slaves, and those who are owned.  And it is very well done.  That is to say, it makes sense, and avoids making Massa a monster.  Since obviously no slaves were interviewed for the writing of this play, we have to trust that Mr. Thomas did his homework, as it appears he has, so it’s very likely he’s drawing from journals, letters, diaries, etc.

There is also the subplot of the sister killing the overseer.  It starts out promising, but it doesn’t really go anywhere.  Monroe knows where she is (she ran off, of course) and if Massa finds that out, he’ll kill Monroe.  But Massa asks him once, he lies, and that’s the end of it.

I was much more impressed with Mr. Thomas as a writer than director.  The play kind of plods along. There are no emotional highs and lows.  For instance, when Cherry find out her sister has killed the overseer, she does say, “They gon’ kill her!,” but she didn’t seem horrified, which it seems she ought to have.  Jeremiah, too, when his father tells him, seems relatively blasé.  There was some yelling, but that was how Jeremiah communicated most of the time.  There were many other should-have-been climaxes that were pretty much at the same emotional level as everything else.

I had some trouble with the writing in Act II.  At one point, Massa’s wife, Samantha (Shanna Babbidge), is trying to attack another character.  Cherry puts an arm around her waist and pulls her back, and Samantha collapses and is at death’s door.  …  Huh?  Even if Cherry had squeezed the wind out of her and thrown her to the side, that is simply not a reasonable consequence.  Later, when Massa is tied up and forced into a chair, ya gotta figure he’s going to be upset by this, but Monroe seems to find his railing unreasonable.  He says, “Your wife’s dead and you still mean as a snake.”  But earlier, he had said Massa wasn’t mean and he is not depicted that way. 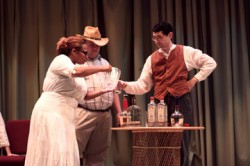 Another subplot could have been, well, earth-shattering, and it, too, went nowhere.  Massa had sex with Cherry and many other slaves, and passed Cherry around quite freely.  When Cherry finally succumbs to Samantha’s pressure to tell her about it, that should have been a very powerful speech. It peaked a little bit, but as with every other almost-climax, it didn’t really grab us and make us listen.  One of the other slaves in the rebellion turns out to be one of Massa’s kids, which could be a whole play by itself, but it showed up once and not to great effect.

I was never comfortable with the two boys, Jeremiah and Ben, being such complete opposites. Sure, brothers differ greatly from one another, but it was like these two were concept – good vs. bad.  But people are not all bad or all good.  Ben has a dramatic turn-around when he and his family are captured by the slaves.  It’s strongly implied that Ben believed slavery was wrong.  Sure, he’s going to be upset when they’re all tied up – like slaves – but one-eighty seems a little too contrived.  Also, Monroe makes a deal with Massa that if he frees all the other slaves, he will hand himself over to the authorities.  But he didn’t.  He escaped.  I was bothered by him breaking his word when he was presenting himself as a honorable man.

There was no comic relief in the play at all, and there were opportunities for it.  Even Shakespeare, in his bloodiest plays, recognized the need for this.  But Thomas gives us none, as a writer or director.

There were at least two very interesting anachronisms.  One scene involved a bright red nylon bag.  And Massa signs the document with a ball point pen?

As for the acting, it was all competent, but not much more.  Nobody really stood out, though everyone communicated their character well enough.  Some of the actors lacked enunciation, making it difficult for the audience to understand.  If you have any hearing issues at all, sit up front.  You can always hear the performers just fine, but even some in the audience whose hearing was fine couldn’t understand the actors when they spoke quickly or several spoke at once.  It’s easier closer up.

Although no American is proud that slavery existed in our history, it is important that we remember and talk about it so that it never happens again.

When you go to see this play, be careful about parking.  Be sure you park in the lot behind Sojourner–Douglass, at the rear of the building on Asquith Street off of Orleans.  College campuses are notoriously challenging to navigate, but if you park there, you’ll see the entrance to the theater right away.

The Last Shall Be First plays through September 2, 2012, Friday and Saturday at 8:00pm, Sunday at 3:00pm at Sojourner–Douglass College,  200 N. Central St., Baltimore, MD 21202. Buy tickets at the door. The box office can be contacted at dphaireassistant@yahoo.com.