Concert Review: An Evening with Idina Menzel at Wolf Trap 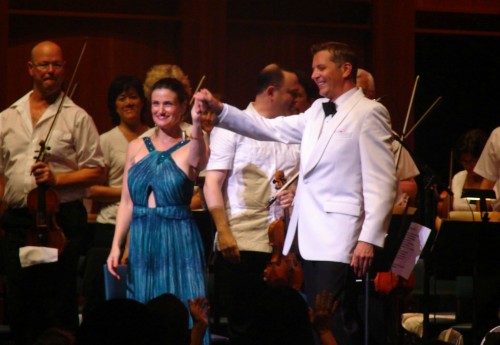 On August 3rd, Broadway star Idina Menzel performed in a special one night only concert at Wolf Trap in front of one the biggest audiences the park has had all summer, selling out the house seats.  Best known for her Tony Award-Winning role as Elphaba, the role that Menzel originated in Wicked, Idina made her Broadway debut as Maureen, in the original production of the Pulitzer Prize-winning hit RENT.  Besides theatre Menzel has had a recurring guest role on TV’s Glee and has released a handful of pop albums.  You may have even seen her on the big screen in Disney’s Enchanted playing Patrick Dempsey’s girlfriend Nancy Tremaine.

The first part of the concert featured Steven Reineke conducting the National Symphony Orchestra in a series of instrumental music.  The orchestra opened with a piece called “Celebration Fanfare” composed by Reineke.  This exciting composition was originally written in dedication to Cincinnati Pops maestro Erich Kunzel who passed away in 2009. The orchestra then played selections from Gypsy and then a musical tribute to Diana Ross as the audience sang along to symphonic versions of “Stop! In the Name of Love,” Touch Me in the Morning,” and “Ain’t No Mountain High Enough.”

Much like how Michael Crawford opened his 1998 concert by starting his show with him offstage singing “The Music of The Night,” Idina Menzel could be heard in the wings singing “Over The Rainbow” and then came out to sing “The Wizard and I” from the musical Wicked to thunderous applause.

Her stories between songs were not as refined and polished as her singing, spouting off the f-bomb and other profanity and bawdy humor such as when she spoke of wishing she could crowd surf like Bruce Springsteen “but my boobs would fall out and I’d pee my pants.”  When the NSO looked visibly embarrassed and didn’t laugh at her jokes, Menzel said to the orchestra, “Did you all go to Julliard?  You are all so quiet.”

Lifting up her long dress to show off her bare feet, Menzel told the audience that she likes to perform barefoot since she feels that she sings better without shoes.  Putting her best bare foot forward, Menzel’s formula seemed to work as she impressed the audience with her strong vibrato which featured her unique sound, singing Broadway tunes and pop songs.

She nailed every note and conveyed the meaning behind every lyric.

Idina has two singers that are inspirational to her: Canadian musician, singer and songwriter, Joni Mitchell and legendary singer and actress Barbra Streisand. A favorite story of the evening was how she recalled the time when she was asked to sing the song “Don’t Rain on My Parade” at the Kennedy Center Honors awards where Barbra Streisand was to receive one of the awards that year.  Idina wanted to sing “The Way We Were,” but that song was already given to Beyonce. Menzel got laughs when she sang a portion of that song, parodying Streisand, heavy NY accent and all.  Joking aside, she then sang an exuberant arrangement of “Don’t Rain on My Parade.”  After the song, an audience member shouted, “You are better than Streisand!” 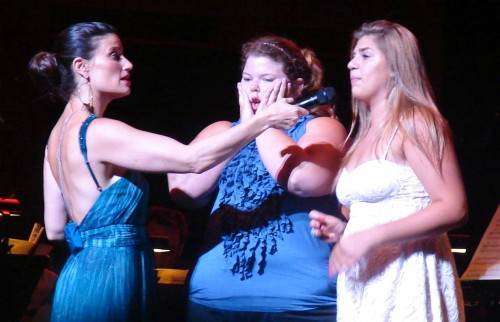 The most exciting part of the evening was when Idina put on flip-flops and walked into the audience and wrangled two brave fans to sing a song from RENT with her.  The first girl that was chosen seemed so thrilled to be standing beside her idol that she would often hold both hands to her cheeks as if she could not believe that this moment was happening.  The second girl that was chosen got Idina’s attention because she made a poster for her.  The audience loved every moment of them singing, giving cheers and a standing ovation.

Menzel’s best performance of the evening was the song “Somewhere” from West Side Story. She nailed every note and conveyed the meaning behind every lyric. But the audience’s favorite songs were clearly from Wicked, including her solo version of “Defying Gravity” and her moving a cappella version of “For Good.”

Running Time: 2 and a half hours with one 15 minute intermission.

This was a special one night only event.  To learn more about future events at Wolf Trap, visit here.