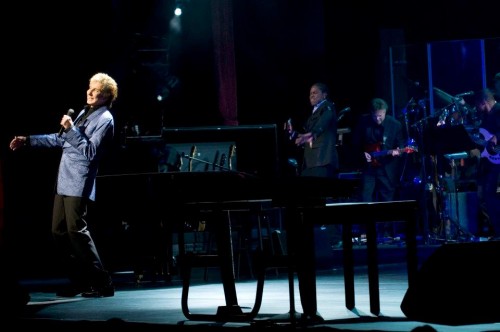 Entering the Wolf Trap stage wearing all black except a blue jacket, legendary pop star Barry Manilow began his concert with the song “It’s a Miracle,” singing the lyrics, “You wouldn’t believe where I’ve been. The city and towns I been in, from Boston to Denver and every town in between…” The audience at Wolf Trap in Vienna, Virginia was sure glad he made a stop to their town, filling the seats with cheering fans.  In only Manilow’s second visit to Wolf Trap ever, the crowd was so enthusiastic that he invited the audience back for his second performance because they were all “so much fun to perform to!”  After this warm reception, I’m sure Manilow will be back to Wolf Trap soon.  In the meantime, you have one more chance to see him perform, tonight at 8.

After all these years performing, he’s still got it!

Did you know that Manilow has a Tony Award?  In 1977, he received a special Tony Award for his show, Barry Manilow on Broadway.  Another fun fact is that he has written many commercial jingles.  Do you remember the lyrics, “I am stuck on Band-Aid, ’cause Band-Aid’s stuck on me.” And a popular insurance company still uses his jingle, “like a good neighbor” and well, you know the rest.  But it is Manilow’s signature romantic ballads and feel-good singles like “Mandy,” “Copacabana,” and “I Write the Songs” for which he will most be remembered.

At age 69, Barry Manilow still has all the energy of a 35 year old exclaiming, “I still got it,” after he amazed the audience with his high notes during “Weekend in New England” (When Will I Hold You Again). People of all ages attended the concert, though he did joke to the children in the crowd saying, “I was the Justin Bieber of the ’70s.”

Originally from Brooklyn, New York, Manilow told the audience the story of how he attended the high school that was voted the most dangerous school in the nation, leading into the song, “Brookyn Blues.” But not all was bad at his school.  He credits that he “wouldn’t be standing on this stage today if it wasn’t for joining the orchestra class.”  He went on to say that “It’s the music teachers that are the heroes,” encouraging people to participate in his program called the Manilow Music Project.

“I am so happy to help the kids and the schools. Anyone can do it, anyone! Just call your local elementary or high school and talk to the music director, see what they need. You can send them a set of drums or used trumpets that are in your basement and that would make all the difference in the world to young kids. That is the key, helping the kids and making a difference in their lives and their future.” -Barry Manilow 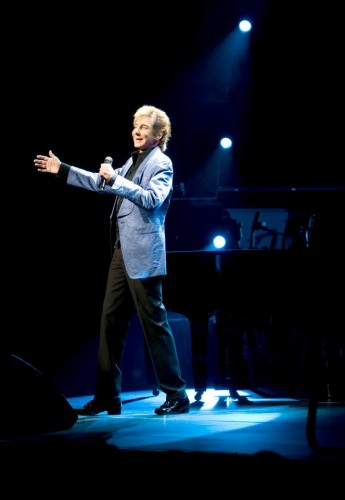 Manilow’s concert included a few video highlights of his career, including Dick Clark’s American Bandstand and The Midnight Special.  It was very special to see a video of him performing “Mandy” as Mr. Manilow himself gazed upon his legendary music career. What is more, he then sat down at his piano and began singing along with himself to the cheers of the audience.

Not all of his music was from his past.  He performed “Everything’s Gonna Be All Right” from his latest album, called 15 Minutes which was released on June 14, 2011. The album tells the story of a fictional singer/musician who dreams of 15 minutes of fame.  After achieving stardom, the character experiences the downside of fame. Sounds a lot like the story of Manilow, except for the fact that he has had more than 15 minutes of fame.  And after the super concert I saw last night, I feel he deserves every second of it!

Barry Manilow is a world-class singer and songwriter.  In his career, he has sold more than 80 million albums, 29 of which are certified platinum, with 3 additional albums that have gone triple platinum.  After all these years performing, he’s still got it!

For those in Baltimore, you can see Barry Manilow at the 1st Mariner Arena, Saturday, September 15 at 7:30 pm.

Running Time: 2 and a half hours with no intermission. Running time includes the opening act (comedian Jake Johannsen) which was about 30 minutes.

Barry Manilow has one more performance tonight at 8 pm at The Filene Center at Wolf Trap National Park for the Performing Arts which is located at 1551 Trap Road, Vienna, Virginia 22182. Tickets can be ordered online or by calling Tickets.com at 877-965-3872.