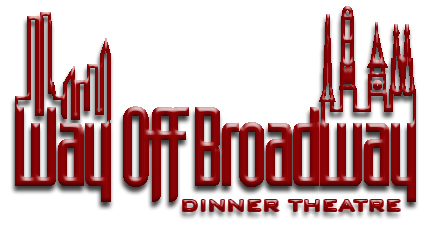 In recent years, some of the most popular Broadway shows have had their beginning on the silver screen; while popular movies began on the stage. Without a doubt, Broadway and Hollywood go hand-in-hand in the modern era of entertainment. It will be this combination that audiences will celebrate during The Way Off Broadway Dinner Theatre’s 2013 Mainstage Season. The Frederick theatre has announced its upcoming 19th season, which brings together shows that have been a success on stage and screen.

At the beginning of every year, usually at the end of March, Way Off Broadway’s producers begin working on lining up shows for the next year’s season. The first list of potential shows is usually a long one. As research is done on each of the possible productions, the list is shortened time and time again. Finally, four shows are selected, plus the theatre’s Christmas show, which is an original stage production written every year. For the 2013 Season, as the producers began planning, the idea came about to build the season around shows that had been hits on Broadway and in movie theatres.

The “Broadway Meets Hollywood” Season kicks off in January with one of the most popular plays ever written, Steel Magnolias. It will mark the second time the play, one of the most requested shows by the audience, has been produced at Way Off Broadway. The spring brings the regional premiere of Dolly Parton’s 9 to 5 – The Musical to Frederick. Following in the summer is the mega-hit musical Legally Blonde. The first three shows of the season will all pave the way for the ultimate “movie musical,” a show set during the golden age of Hollywood, Sunset Boulevard. The 2013 Season concludes during the holidays with the brand new stage production Mr. Claus.

“We are very excited about our 19th Anniversary Season,” says Justin M. Kiska, Way Off Broadway’s President and Managing Director. “It is going to be one of the biggest and best years yet at Way Off Broadway.”

“We thought having a season that brings together some of the most popular shows from Broadway and Hollywood would be fun for our audiences,” adds Bill Kiska, the theatre’s Executive Producer. “Even though we are just now announcing the season, a lot of work has already gone into the planning of some of the production to ensure that 2013 will be a great year at Way Off Broadway.”

STEEL MAGNOLIAS | January 11 – March 9, 2013
The quintessential story of friendship and trust, Steel Magnolias serves up a southern slice of life that’s as warm and comforting as sweet potato pie! In the world of Truvy’s Salon, six women come together to share their secrets, fears, and love for one another while engaging the audience in hysterical and neighborly gossip. From weddings to divorces, babies to funerals, new beginnings to happy and sad endings, they share each moment in their lives with grace and heart.

9 TO 5 – THE MUSICAL | March 22 – June 1, 2013 9 to 5
The Musical is a hilarious story of friendship and revenge in the Rolodex era. Based on the hit movie starring Dolly Parton, Jane Fonda, and Lily Tomlin, 9 to 5 tells the story of three unlikely friends who conspire to take control of their company and learn there’s nothing they can’t do — even in a man’s world. Outrageous, thought-provoking and even a little romantic, 9 to 5 is about teaming up and taking care of business. It’s about getting credit and getting even.

LEGALLY BLONDE | June 14 – August 24, 2013
Sorority star Elle Woods doesn’t take “no” for an answer. So when her boyfriend dumps her for someone “serious,” Elle puts down the credit card, hits the books, and sets out to go where no Delta Nu has gone before: Harvard Law. Along the way, Elle proves that being true to yourself never goes out of style.

SUNSET BOULEVARD | September 6 – November 9, 2013
Sunset Boulevard weaves a magnificent tale of faded glory and unfulfilled ambition as silent movie star Norma Desmond longs for a return to the big screen. Having been discarded by Tinsel Town with the advent of “talkies,” her glamour has faded in all but her own mind. When she meets struggling Hollywood screen-writer Joe Gillis through dramatic circumstances, their subsequent passionate and volatile relationship leads to an unforeseen and tragic conclusion.

MR. CLAUS | November 22 – December 28, 2013
A tale of Christmas comes to Way Off Broadway for the holidays. Always the most popular show of the season, perfect for the entire family, this original Christmas musical is one not to be missed. Blending songs and music from Christmases past and present, and all set to a backdrop celebrating the one and only Santa Claus, this show will fill everyone with the holiday spirit. And when Santa is involved, anything is possible.

Mainstage performances at The Way Off Broadway Dinner Theatre are every Friday and Saturday evening, with matinees on the 1st, 3rd, and 5th Sunday of each month. In addition, select Sunday evening Show Only Performances are included in the run of each show. Tickets for the 2013 Season are now on sale and may be purchased by contacting the Box Office at (301) 662-6600. Tickets are $43 on Fridays, $47 on Saturdays, and $43 on Sundays. In addition to individual tickets, 2013 Season Subscriptions are also on sale.

To learn more about Way Off Broadway or any of its productions, including its Children’s Theatre and special events, visit www.wayoffbroadway.com or follow the theatre on Facebook at www.facebook.com/wayoffbroadway.

The Way Off Broadway Dinner Theatre has been a leader in the region’s performing arts community since it first opened in 1995. Under the direction of the Kiska Family since 2002, Way Off Broadway has produced such productions as A Funny Thing . . . Forum, Guys & Dolls, Steel Magnolias, Oklahoma!, Grease, Fiddler on the Roof, The Odd Couple, A Chorus Line, Lend Me a Tenor, The Sound of Music, Thoroughly Modern Millie, Evita, Cats, The Full Monty, South Pacific, and Hairspray, as well as the regional and/or area premieres of Neil Simon’s The Goodbye Girl – The Musical, Jerry Herman’s La Cage aux Folles, the musical comedy The Wedding Singer, Mel Brooks’ The Producers, Dirty Rotten Scoundrels, and The Drowsy Chaperone. Located along Route 40 West, the Golden Mile in Frederick, the theatre also produces a one-of-a-kind children’s lunch theatre, as well as a number of special events throughout the year.