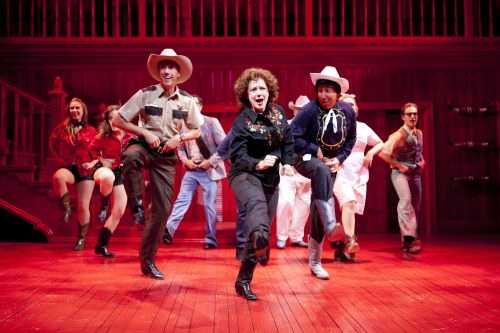 Sherri L. Edelen as Miss Mona leads the cast in the finale. Photo by Scott Suchman.

Signature Theatre is known for its world premieres and for having a long association with presenting Stephen Sondheim musicals. They are also known for presenting musicals that are not seen a whole lot anymore. Their latest offering, The Best Little Whorehouse in Texas, was a Tony Award winning musical that opened in 1978 and ran almost four years. It then was turned into a movie in which someone thought it was a good idea to have Burt Reynolds try to sing. This idea backfired miserably. I implore you MTG readers; if you have seen the movie, get it out of your mind and let Signature show you the proper way to watch this show.  The production features the Tony Award winning Carol Hall score, a stellar cast, and knockout choreography. 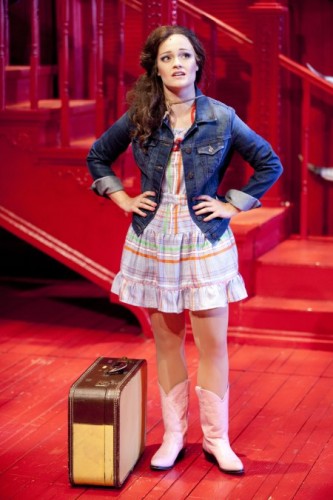 From the time Edsel Mackay (Stephen F. Schmidt) the newspaper editor steps on stage to begin the story of Miss Mona (Sherri L. Edelen) and the Chicken Ranch, we are treated to some big songs, such as “20 Fans” and “A Lil’ Ole Bitty Pissant Country Place.” Carol Hall’s songs have lots of energy, which is enhanced by Karma Camp’s wonderful choreography.  The show has everything, including country two stepping and a killer dance number called “The Aggie Song,” which gives the boys of the chorus a great big Texas style feature. The score also has a Christmas song, that is not a Christmas song at all, called “Hard Candy Christmas,” which illustrates what life will be like for the girls of the ranch later on. It is a touching moment and shows the versatility of Carol Hall as a writer. The score is played by a red hot six piece band under the direction of Gabriel Mangiante.

It’s interesting to me that although the show is set in 1972 it is very timely and shows that the media has a big influence on how events will play out.

Larry L. King and Peter Masterson’s story depicts the fictional town of Gilbert, Texas.  The town is willing to let a woman run a whorehouse and saw nothing wrong with it until Melvin P. Thorpe (Christopher Bloch), a TV watchdog reporter exposes it.  After Thorpe’s crusade, the Sherriff Ed Earl Dodd (Thomas Adrian Simpson), who is sweet on Miss Mona, is forced by the governor (Dan Manning) to close down the Chicken Ranch.  This kind of media manipulation is not unlike what happens today after something is exposed. What was ok before is now not ok.

Performance-wise, we have some of DCs best performers paired with some great new talent. Let’s start with Sherri L. Edelen in her tour de force performance as Miss Mona. Edelen’s singing and acting in this show might be the best performance I have seen her give so far. Her vocal interpretations of “Bus From Amarillo” and “A Friend To Me” which was written for the 2001 tour with Ann Margaret, were particular standouts. Her acting is brash when it needs to be and tender as well, like in the scene where she has to comfort a new girl to the ranch who is given the name Shy.

As Sherriff Ed Earl Dodd, Thomas Adrian Simpson with his rich baritone is the perfect match to Edelen’s Mona. His performance of “Good Old Girl” is one of the best songs in the score and Simpson makes it look so easy.

Christopher Bloch as Melvin P. Thorpe is smarmy and relentless, which in the context of this show, are all terms of endearment about Bloch’s performance. Bloch gets a big production number as well, called “Texas Has A Whorehouse In It,” and he really delivers the song. 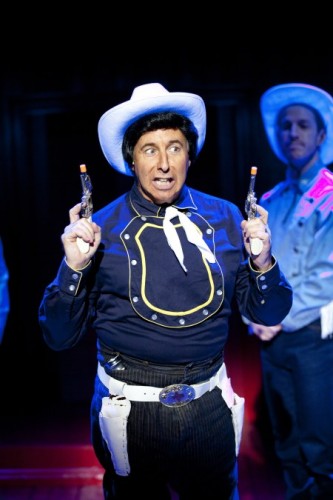 We have Erin Driscoll as Angel.  She is just off the bus and looking for work at the Chicken Ranch to support her young child. Miss Driscoll as always is a pleasure to watch. As Shy, Madeline Bottari shows that she is going to be a major player in the DC theatre community.

Tracey Lynn Olivera as a brash waitress named Doatsy Mae delivers a terrific performance and gets a well deserved feature called what else, “Doatsy Mae.” Olivera is one of those performers whose presence is felt no matter how big or small her role is. In this case Doatsy Mae is a supporting player, but Olivera makes it something more, and that is a wonderful thing.

Nova Y. Payton as Jewell has the exuberant number “Twenty Four Hours Of Lovin.”  Payton with her big voice performs this song with great energy and gives us a preview of what we can look forward to when she plays Effie in Signature’s fall musical, Dreamgirls.

Matt Conner in multiple roles gets a chance to show us his versatility as a performer. Going from Mayor Rufus Poindexter, who is not particularly into his job, to Senator Wingwoah, who is a frequent customer of the Chicken Ranch, Conner creates two totally different characters which is the trait of a good actor.

Last but not least, as the Governor we have Dan Manning, who has a song that should be the mantra of all politicians called “The Sidestep.” The Governor does not appear until Act 2, but with this song Manning makes a big entrance.

The ensemble features a whole lot of talent. It is not fair to single out anyone because they work their little Texas pitooties off all night long.

Collin Ranney’s set depicts the two story Chicken Ranch with openings to the rooms, and wagons come on for the other locales. It is a good use of the space and gives plenty of room for the action. Kathleen Geldard’s costumes and Colin K. Bills lighting enhance the mood of Ranney’s set.

Director Eric Schaeffer has given us what I consider to be some of his best direction with this show. This is a musical that can get real raucous and out of hand if done wrong. It does not in this production because Schaeffer knows how to balance the raucousness with tenderness.

All in all The Best Little Whorehouse In Texas at Signature Theatre gives us a chance to see a great big musical done properly. With its oh so talented cast, Carol Hall’s great score and the watchful eye of Schaeffer and Camp, this Whorehouse is nothing anybody or place would be ashamed to have.

Running Time: Two Hours and 15 Minutes with one intermission.

Advisory: This production is intended for mature audiences and contains adult situations and nudity.

The Best Little Whorehouse in Texas plays through October 7, 2012, in Signature’s MAX Theatre – 4200 Campbell Avenue, in Arlington, VA. Tickets are available for purchase in person at the Signature Theatre Box Office, online, or by calling Ticketmaster at 703-573-7328.