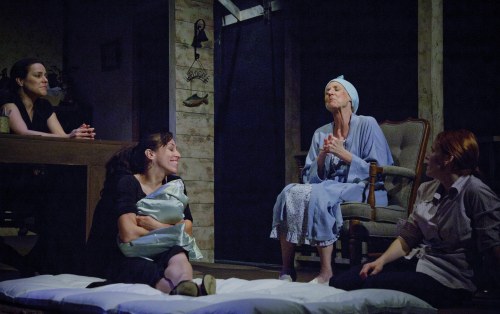 Any play set in Oklahoma’s prairies that opens in the dark with an incongruous quotation from the Anglophile Thomas Stearns Eliot is either seriously misguided, too cruel for August (or April), or an absurdist farce of mythic proportions. Fortunately for Keegan Theatre and the packed house in attendance at Tuesday’s Press Night all three premises are false, yet strangely, superbly true.

Tracy Letts’ August: Osage County is the 2008 Pulitzer Prize and Tony Award winner for Best Play, and it’s easy to see why. The play tackles the big questions, as so few dramas do on the American stage. And it’s those big questions that justify the three and a half hours that it takes to tell this epic tale. 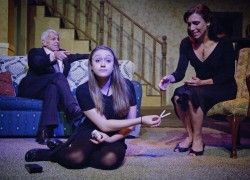 Originally premiering at Chicago’s Steppenwolf Theatre, the play possesses all of the darkness and savagery that have become Steppenwolf’s trademarks. It is a deeply visceral exploration of “the plain,” that curious disease that afflicts the sober during times of reflection; Letts’ three-act family saga leaves no emotional stone unturned as it digs to the core of contemporary America’s obsession with self. No one is spared, most importantly not the audience, as you are guaranteed to leave the theatre knowing that the play will haunt you for a long time.

In a nutshell, the Weston family’s father and renowned poet, Beverly (wryly played by Stan Shulman), disappears, which brings the three Weston daughters back home. Together, these events generate an upheaval of family dynamics that reveals much of the dysfunction, brutality, and greed that has motivated the family’s identity for over forty years. 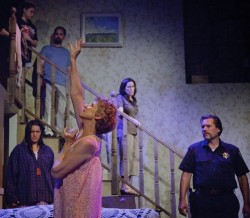 Instead of centering the play around the family patriarch, however, Letts organizes his tale around the family matriarch, Violet, played with mind-stinging waspishness by two-time Helen Hayes Award-winner Rena Cherry Brown. Addicted to a slew of prescription painkillers, she enters the stage resembling a bitter Mary Tyrone, eventually advancing to rival Martha of Edward Albee fame, before finally launching herself into the stars. Ms. Brown’s performance is brilliant: at times you’ll feel sorry for her; at other times, you’ll want to kill her off; in the end, however, you’ll just hope she’ll move to the next county like a plague of locusts.

The three Weston daughters are the recipients of much of Violet’s sting. The youngest, Karen, is played with an intoxicating Florida sunshine by Karen Novack; but she is no match for her mother’s inexplicable disdain for her. The middle daughter knows better than to challenge her mother’s judgment face to face, and Belen Pifel portrays Ivy’s subterfuge with coy dexterity, dipping easily beneath jabs and rolling painlessly away from uppercuts. The eldest daughter, Barbara, never learned the art of evasion, however; and Susan Marie Rhea plays this story’s antagonist with a determination that will literally make you believe she’s the winner. But don’t be fooled! Ms. Rhea’s fierceness is only matched by her vulnerability to defeat, and she captures magnificently Osage County’s rolling plot line. Its twists and turns will leave you guessing up to the play’s very conclusion. 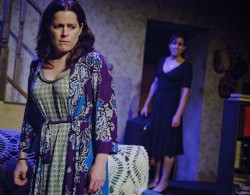 The entire cast of this production does a splendid job embodying the play’s intricate story, and with a cast of thirteen that’s no easy feat. Aside from the five actors mentioned above, several others did standout jobs. Colin Smith portrays Bill Fordham, Barbara’s estranged husband, capturing his guilt-ridden decency with enormous subtlety. You can’t help but like the guy even though he commits your standard middle-aged male stereotypical act. Kevin Adams also does a fine job as Charlie, the long standing husband of Mattie, played with the most Oklahoman of miens by Kerry Waters Lucas. Adams’s Charlie carries his dignity quietly, but when he must, he asserts his honor with force and gravitas. Lynday Rini, Michael Innocenti, Shadia Hafiz, Charlie Abel, and Eric Lucas round out this tight ensemble cast.

…you are guaranteed to leave the theatre knowing that the play will haunt you for a long time.

Directed by Mark A. Rhea, Keegan’s production of Osage County moves effortlessly back and forth between heartache and belly laugh. At no point does the play’s three and a half hours of deeply felt fatalism overwhelm its comic survivalism. Suicide, incest, adultery, pedophilia, and betrayal—all bubble up at one time or another in this subtly absurdist drama. And just when you think that you’ve had enough of the madness, somehow a fry pan to the nose makes the latest bit of human malady seem like just another cactus on the play’s barren landscape. So sit back and enjoy.

The production’s designers do an admirable job plopping the Weston’s large country house directly into the Church Street Theatre. With multiple levels and six acting spaces, representing different rooms within the Weston home, Stefan Gibson’s faded scenography provides amble terrain for the characters to roam. Megan Thrift’s lighting supports this mausoleum-like interior and Erin Nugent’s costumes give definition and character to a diverse range of characters.

Keegan Theatre’s August: Osage County is a Washington production well-worth seeing: a three-act Greek trilogy of sorts, the play explores through crisis and comedy the darkest areas of the soul. To be sure, you won’t leave the theatre feeling like all is right with the world, but you might leave wanting to do your part to salvage what’s left.