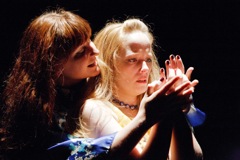 While all theatre has its risks, some theatre entails more risk than others.  Perform the well-traveled classic or musical and you risk leaving your audience unenthused by yet another been-there/done-that rerun.  On the other hand, perform not just a World Premiere, but a World Premiere of an absurdist, surrealistic comic murder mystery with tragic implications and you risk leaving your audience swimming like a goldfish in its bowl wondering “What the heck is that strange world far beyond my eyeballs?”  It’s that later proposition into which Longacre Lea’s production of Kathleen Akerley’s Goldfish Thinking plunges headfirst, or gills first, depending on your current state of mind.

The show’s premise is a fascinating one.  Take Alice, of Alice in Wonderland, and instead of having her young self being bored on an English hillside and looking for adventure, plop her young adult self down in a Georgetown University Law School and have comical agents of the law put her on trial for murder in the first degree.  What you end up with is a modern Washington female version of Kafka’s The Trial. 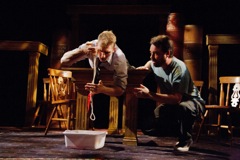 It turns out that Dana has been having a recurring dream.  She has been accused of murder.  As the play progresses, Dana cannot stop thinking about these dreams and their accusation.  The more she thinks, the more her obsession intensifies.  Then, she finds herself acting surrealistically: her dream-state and the reality of the law school merge.  She insults Helene unknowingly; she openly and without conscious intent challenges the law school’s most frightening professor (Jesse Terrill).  She begins spiraling out of control.  Her three friends try to help her, offering advice, counseling, and even pro-bono detective services.  She even goes to a new age healer, a therapist, a spiritually cryptic “Frizzy Woman” (Anna Brungardt) and a psychic (Jennifer Hopkins); but all to no avail.  This journey into the unconscious cannot be assisted; Dana must make it alone.

…a modern Washington version of Kafka’s ‘The Trial.’

The ensemble does a solid job in this production.  Heather Haney’s Dana is appropriately thoughtful and determined, and she successfully sustains the play’s difficult through-line as the play shifts back and forth between reality and dream.  As her obsession increases and her paranoia flashes to the forefront in Act 2, we genuinely feel concerned for her fate.  Glenn, DeMain, and Hayes—as Helene’s three friends—capture precisely that graduate law school pressure cooker world where bonds can be both molded and severed in short order.

It’s the actors’ work in the play’s surrealistic dimension, however, that really deserves the highest praise.  Anna Brungardt, Tyler Herman, Slice Hicks, Chris Davenport, Jesse Terril, and Jennifer Hopkins create a panoply of characters whose names may be vague but whose sharp definition and quirky attributes give the production much of its vitality and life.  Davenport’s Mao couldn’t be more engaging and, when Dana employs lucid dreaming (when one attempts to consciously control the course of one’s dream narrative) and Davenport must shift between an authoritative Mao and a huffy British aristocrat named Basil, the effects are hilarious.

The design team for this production did a marvelous job, particularly set designer Elizabeth Jenkins McFadden.  Her surrealistic scene-scape evokes the distortion of Dali combined with the playfulness of Dr. Seuss, which together established a visual frame for the play polyglot genre-bending style.  Costumer Gail Stewart Beach handled the challenge of split-second costume changes with both grace and purpose, as each character’s visual portrayal supports his/her mainly nameless identities.  John Burkland’s lighting and Neil McFadden’s sound put the icing on the production’s stylistic panache, spreading creepy and eerie over a script meant to leave its audience with an aftertaste of bewilderment and angst. 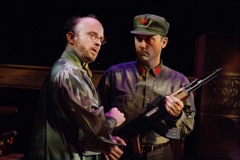 With any world premiere it is always the script that matters most.  Akerley takes her audience on a journey into the collective unconscious of a young, striving professional woman.  That journey will eventually plunge off the deep end, taking both the story’s protagonist and us with it.  Did I wish for it to return to that law school?  Most certainly.  I wanted to know more about what happened to Dana than the cryptic “teddy bear” memorial that iconically marked the stage.  Did I want to know more about that woman in blue, whom Dana recognized, but whom I did not?  Absolutely.  In a murder mystery one always wants to know for certain “who done it.”  Did I want Akerley to solve the impossible paradox of a subjective mind rationally and legally determining the meaning of subjective guilt?  Who wouldn’t?  We would all sleep easier tonight if she had, but when you have a play that sets out to solve the impossible, the passion of the quest trumps that quest’s success every time.   And that is Goldfish Thinking in a nutshell.

Longacre Lea’s tagline declares “physical theatre of cerebral work,” and that could not be more realized than with its production of Akerley’s Goldfish Thinking.   This sometimes funny, sometimes heady, but always mysterious production explores the impossibility of ever knowing our subjective natures, and of ever giving definition to our haunting guilt and anguish.  If at times you find yourself lost, just remember that the sea in which you swim is but a bowl.  You may see yourself in the glass, but the world beyond that glass is the mystery that continually brings you back to gazing, and wondering, what it all means.