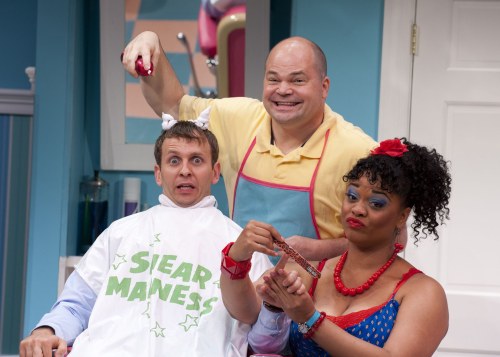 There is a tendency with shows that are running for a while for them to get ragged and run down. I am happy to report that the interactive murder mystery Shear Madness, which is now in its 25th year at The Kennedy Center, does not fall into this category. With a new set and venue, Shear Madness with its talented cast and quick wit is a very enjoyable way to spend a night in the theatre. The play was originally written by German playwright Paul Pörtner and adapted by Bruce Jordan, the play’s original director.

The action takes place in the ‘Shear Madness’ salon in Georgetown. Isabel Czerny, the landlady and used to be famous pianist who lives over the shop, is murdered with a set of beautician shears and everyone in the shop is a suspect, and there are plenty to choose from. We have Barbara DeMarco (Tiernan Madorno) who works in the shop and was the only heir to Czerny’s fortune. Tony Whitcomb (Neil Casey) is the owner of the shop and makes no bones about how he does not like Czerny (one reason being that you can hear her piano playing downstairs in the shop). Then there is Eddie Lawrence (Aaron Shields), a sleazy business man just oozing with dishonesty.  Last but not least, we have the wealthy socialite Mrs. Shubert (Brigid Cleary) who just wants to get her hair done and get to Bermuda. The job of the two detectives, Nick O’Brien (Patrick Noonan) and Mikey Thomas (Jarreau Williams), who have been staking out the shop, is to solve the murder of Isabel Czerny, which will be done with the help of the audience. Yes, you can help solve the murder when you see Shear Madness.

It’s very easy to see why ‘Shear Madness’ has endured all of these years.

The cast, which is made up primarily of Shear Madness veterans, provide plenty of laughs with topical humor and plenty of innuendo. There are references to Paul Ryan, DC cops, and Broadway musicals among other things. We also have a vaudeville style of humor. If one actor, for example, were to say, “I think he did it,” then the second actor would say, “You can say that again.” The first actor, after a slight pause, would of course say, “I think he did it.”  It’s this kind of humor that makes Shear Madness a delight to watch.

Under the watchful eye of longtime Associate Director Bob Lohrmann and 19 year veteran Stage Manager Scott L. Hammar, the cast never overdo the jokes and, because of this, the show’s comedy is never forced.

It’s hard to single out anyone in this ensemble, but for me Neil Casey as the flamboyant hairdresser Tony Whitcomb stole the show. His characterization is hysterical. I very much enjoyed Brigid Cleary as the upper crusty Mrs. Shubert and got a real kick out of Tiernan Madorno’s portrayal of the gum chewing, high heeled Barbara DeMarco. Kudos goes out to Aaron Shields who plays Eddie Lawrence. He is the most unsympathetic character in the show, but he plays him wonderfully. 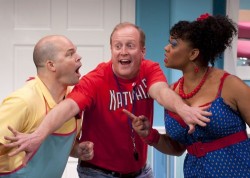 Patrick Noonan and Jarreau Williams, as Nick O’ Brien and Mikey Thomas, do a fine job with the investigation. The fact that Mikey Thomas is really green as a cop just adds to the hilarity.

The show is currently in the Family Theatre at Kennedy Center while the upstairs Theater Lab gets a face lift and, thus, has a new set by Scott L. Hammar adapted from the original design of  Kim Peter Kovac.  To be sure, the new set adds to that fresh feel that I mentioned at the top of my review.

It’s very easy to see why Shear Madness has endured all of these years. With its topical jokes and first rate cast you can see why audiences continue to come. This production is the second longest running production of a play in the country. The only one beating it is the sister production in Boston which has been running for 30 years. There will be a separate feature coming from me real soon on the show’s history.

Any show that can run for this long and still look as good as it does, gets my seal of approval. Compile that with its current cast and you have a show that I don’t see going anywhere anytime soon.

Running Time: One Hour and 55 minutes including one intermission.

Note: The show is currently playing in The Family Theater space until sometime in November. It will then return to the Theater Lab after it’s upgrades are completed.