Theatre Review: ‘Snow White and the 7 Dwarves’ at The Puppet Co. 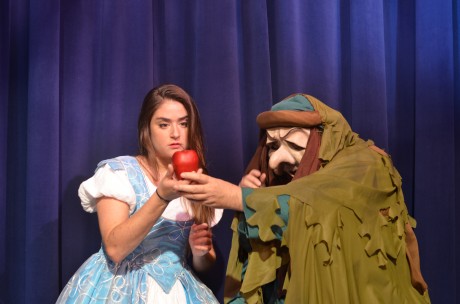 Molly MacKenzie and Christopher Piper in rehearsal for the Puppet Co.’s production of “Snow White and the 7 Dwarves.” Photo by Erin Gifford.

The Puppet Co. Playhouse presents a traditional telling of Snow White and the 7 Dwarves but adds a few clever twists.  With a mix of live actors, rod puppets, and the use of masks, the Puppet Co. weaves a mesmerizing and humorous tale of courage, cruelty, and the power of true love.

The stage is set perfectly for puppets.  With a total of four half-walls, two on each side of the stage, there is plenty of room for the puppets to interact with the live actors standing center stage.  The first puppet to make an appearance is a lovable blue horse that is laboriously pulled on-stage by the handsome Prince Stefan, played by Mason O’Sullivan.  The Prince tries to convince the horse to come home to the palace, but the horse refuses to budge. 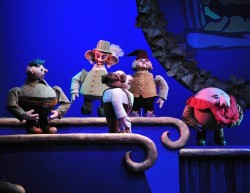 The Dwarves. Photo courtesy of The Puppet Co.

The scene shifts to the evil Queen Rosenrot (Molly MacKenzie), dressed in a beautiful, long red robe with a high curved collar made of mesh and laced with red sequins.  Her golden crown just peeks over the collar, and opera-length gloves complete her malevolent look.  With her back to the audience, she talks to her magic mirror hanging center-stage.  The mirror informs the Queen that there is a girl more beautiful than she, and thus begins the traditional telling of Snow White.  The Queen calls to her Huntsman, who is a puppet dwarf, and gives him the task of bringing her Snow White’s heart, so that the Queen may again be the fairest in the land.

…an amazing array of talent.

This is where the story strays from tradition, as the Huntsman is one of the titular seven dwarves.  He calls to his six fellow dwarves to discuss his new task, and they pronounce it “just gross” to take a human heart.  All agree to protect Snow White and to protect her from the Queen.  They acknowledge they are small, but each is special and is the best at what he does.  For example, one is known for incredible strength, and another is the fastest runner in the land.  With their combined skills, they will keep her safe. 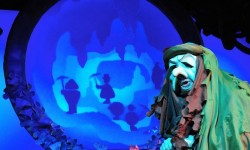 Photo courtesy of The Puppet Co.

Snow White, played to perfection by a double-cast MacKenzie, does meet her Prince, and yes, it is love at first sight.  The ending of this tale, however, is quite different, funny, and very clever.  It turns out that, sometimes, a dashing Prince is not the only thing needed to have a happy ending.

Snow White and the 7 Dwarves exhibits an amazing array of talent:  charming puppets designed and built by Christopher Piper; gorgeous costumes designed by Allan Stevens and constructed by MayField Piper; and an interactive viewing screen.  All these elements unite to transport children and adults to a magical and exciting realm which should not be missed.