‘A Quick 5’ with David Esbjornson 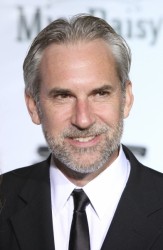 David Esbjornson is the director of Red Hot Patriot: The Kick-A*s Wit of Molly Ivins, which is currently playing at Arena Stage complete with an extraordinary performance by Kathleen Turner. His previous work includes on Broadway The Goat or Who is Sylvia, Driving Miss Daisy and The Ride Down Mount Morgan. He directed the world premiere of Angels in America at The Eureka Theatre in San Francisco. Regional credits include productions for The Guthrie Theatre, Cleveland Playhouse, WPA Theatre, Mark Taper Forum and New York Theatre Workshop. He has held the post of Artistic Director at Seattle Repertory Theatre and Classic Stage Company in NYC. As a Director he was awarded an OBIE for best direction of a play for Thérèse Raquin and has been nominated for a Drama Desk Award. I urge you all to check out David’s work on Red Hot Patriot: The Kick-A*s Wit of Molly Ivins. It shows off Kathleen Turner at her best and part of that is because of the great direction of David Esbjornson.

What was your first professional job as a director?

Shortly after I graduated from New York University I was awarded a special place in the New York Theatre Workshop’s New Directors Project. It offered the support of a seasoned design team, casting director and actors. They signed on to the project knowing that they were helping to develop the skills of an early career director. My production was attended by playwright Romulus Linney who subsequently asked me to direct his next project at the Long Wharf in New Haven, CT. 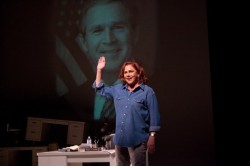 How did you get involved originally with Red Hot Patriot: The Kick-A*s Wit of Molly Ivins and can you tell us a little bit about the piece?

I met the Engel sisters after they invited me to read an early draft of the play. I liked them immediately and fell into a development process that has lasted a couple of years. The piece is an homage to a journalist that Margaret and Allison deeply admired. They were compelled to celebrate the life of a great activist who used fierce intelligence, humor and sheer force of will to stand up to those who have abused their power. We all believed that Molly Ivins was a national treasure and deserves this effort to honor and remember her.

You directed Driving Miss Daisy on Broadway with Vanessa Redgrave and James Earl Jones. When you have that much star power in one place, is there a tendency to get a little star struck?

Yes, I suppose. It is certainly thrilling to experience their talent. But, at the end of the day I still have to do my job and direct their performances.

You have directed two plays by Edward Albee: The Goat, or Who is Sylvia? and The Play About the Baby. What do you enjoy most about his playwriting?

Edward offers terrific challenges to directors and actors. His writing is highly structured and musical. The performances need to feel completely natural while also adhering to the play’s structure. When these two forces are combined you have the beginnings of a strong Albee production.

I have several pieces in development but at the moment, I am in rehearsal with the Guthrie on a new Christopher Hampton play about the American Civil War and the Civil Rights movement. Later this year, I plan to take Driving Miss Daisy to Australia.