News: The Scene of the Crime: Do or Die Mysteries by Chris Felker 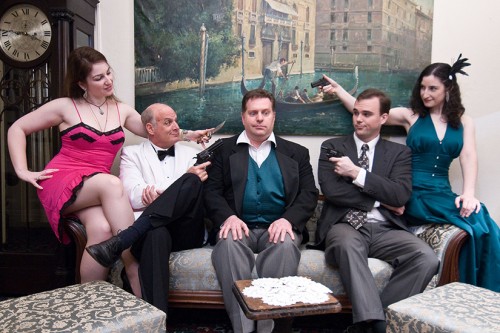 Do or Die Productions begins a new run of its raucously hilarious dinner-theater interactive murder mysteries in a new venue this weekend. Flanagan’s Harp & Fiddle, an Irish pub and restaurant in Bethesda, will host the comic improvisation troupe twice each weekend beginning Sept. 14 for at least the next six weeks.

Promising that “you’ll die laughing,” actor/director/playwright C.J. Crowe, the brains (or, some might say, more the looks) behind the theatrical company, is starting her run at Flanagan’s with her popular play Drop Dead, Gorgeous.

The story line has declining former supermodel Georgianna “Gorgeous” Traylor hosting a dinner party to introduce new products, which might be a new line of seasonings derived from a pricey cologne dubbed “Dollars and Scents,” or a designer trash bag dubbed “Traylor Trash” or some other potential disaster. The cast of suspects, including a jilted ex and a brother who thinks her latest crazy scheme will sink his company, alternately try to aid or hinder Traylor until the night of the debut, when she meets with a sinister, unfortunate end.

Crowe, who wrote, directs and acts in the play, uses six or more actors to develop the plot and draw people into the story. The dinner-party guests, who are, of course, the audience, are given a program describing the story and giving them different “clues” that they can follow up on.

“The scripts for the actors are a cross between stories and outlines,” she said. “There’s a back story which sets up any conflicts germane to the mystery. Then there are character descriptions that are very detailed. They give not only the conflict, but enough three-dimensionality to the character so that an actor can react very organically.” 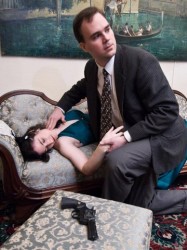 The show starts with a series of introductory scenes, “so the audience can go, ‘Oh, that’s the ____. That’s the crazy person. That’s the rich person. Ooh, I bet they’re going to be the victim,’” Crowe explained. “Then we spend about 15 minutes with the actors going table to table and talking about their story.

“So the characters talk, and they’re not saying the same thing at every single table. So at that point, everybody’s getting a slightly different show. Then we come back and do what I call the expositional critical action scenes, which are the conflicts that have to happen in order for everybody to figure out what their motive is.”

During this time, each diner’s potential to become a player is assessed; one may even be tapped as a suspect, although Crowe said no one is drawn in against his will.

“That’s part of the talent of what my people do, that razor’s edge. The ability to create theatre with the audience, instead of for them; to allow the audience to actually impact the action, at their comfort level, while still moving the plot forward and creating laughter all at the same time.  That’s why I say my actors are the best of the best.” she said.

Crowe says that Bethesda-area arts patrons are ready for this kind of show. Her company had an 18-month run at Blair Mansion Restaurant in Silver Spring until it closed temporarily before Labor Day.

“Bethesda is an arts community, but this is different from anything that is going on there now,” she said, noting that despite several nice theater venues, “this is different; it’s more engaging. It’s not like watching a movie. It’s like being on the set of a movie.”

So she partnered with friend and Harp & Fiddle co-owner Steve Nugent to bring her theatrical company to the eatery’s 45-seat private dining room.

The former director of operations for International Renaissance Festivals Inc. during the 1990s and then operations chief at the Chesapeake Arts Center from 2001 to ’03, Crowe this year is marking 25 years in theater, working in all aspects of the industry. She’s been doing dinner theater since 1988 and in 1993 started Do or Die Productions. Born in Washington, D.C., she has an associate’s degree in fine arts from the American Academy of the Dramatic Arts as well as three others, in business, accounting and anthropology.

She has written more than 40 different murder mystery scripts and regularly stages shows at the Audrey Herman Spotlighters Theatre in Baltimore, as well as teaches various acting classes. 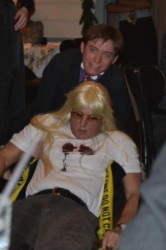 “I’m passionate about it. I think it’s a very vibrant theatrical form. A lot of people look at it and go, ‘Oh, it’s comedy. Oh, it’s improv. That’s kind of the redheaded stepchild of theater,’ but it’s not. And I feel like I’m one of the forerunners in the area, because I’ve actually developed a whole actors’ handbook with techniques for the genre. After 25 years, I know what works and what doesn’t,” Crowe said.

“Improvisation is the beauty of it,” she continued. “There are so many theater companies out there that purport to be interactive comic improv. We really are improv. Yes, we rehearse the conflict; yes, we throw enough jokes in there that if everybody’s having a bad night and nobody in the audience is interactive, it’ll still be a really good show. But everything is organic.”

Crowe performed in a 2006 staging of Agatha Christie’s classic And Then There Were None at the Audrey Herman Spotlighters Theatre in Baltimore, and a Baltimore City Paper review said her performance was “coolly deadpan as the bun-wearing, bespectacled Emily Brent.”

An original play she wrote about a dying woman consenting to have an egocentric TV personality document her demise and probe into her family life, Real to Reel,was featured in the 2005 Baltimore Playwrights Festival when she was based at the Chesapeake Arts Center.

For an idea how these performances progress, check out excerpts from Death & Taxes, filmed at Do or die Productions’ previous venue, Blair Mansion Restaurant in Silver Spring, at www.DoOrDieMystery.com. New shows normally are introduced throughout the season.

The dinner-and-show deal is offered every Friday and Saturday night, but seating is limited. Tickets may be purchased online. To schedule a performance for a private party, go to www.DoOrDieMystery.com and click on the “Contact” link.

A buffet dinner is served starting at 6:30 until the show begins at 7:30; tickets are $47.50 and include dinner, the show and taxes; beverages and gratuities are extra. Early arrivals can enjoy a drink in the main bar until the private, reserved room opens, and audiences also are invited to stay after the show to enjoy live musical entertainment.

About the Author: Chris Felker is a journeyman journalist who spent 30+ years as a newspaper reporter, copy editor and editor before becoming a freelance writer and editor. He writes for several publications in Florida, edits blogs and books, and has a website at www.yourowneditor.com.

This article is a paid advertisement.