Theatre Review: ‘A Funny Thing Happened on the Way to the Forum’ by Front & Centre Stage Productions at Cumberland Theatre 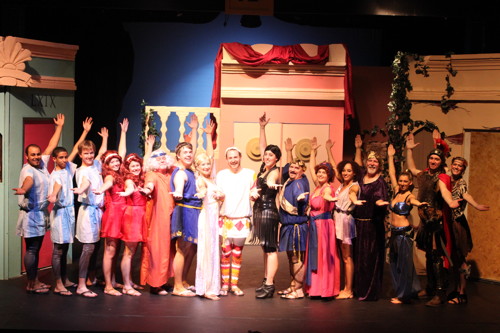 The entire cast of ‘A Funny Thing Happened on the Way to the Forum.’ Photo courtesy of Front & Centre Stage Productions.

A Funny Thing Happened on the Way to the Forum presented by Front & Centre Stage Productions, opened strong on Saturday evening at the Cumberland Theatre to a nearly full house.  A decorative, yet functional set of ivy and Roman architecture provided the backdrop to what proved to be a high-energy evening of madcap chase scenes, mistaken identities, and, of course, plenty of leg beneath those short togas.  If one word was used to summarize the night, it would be “hilarious.”  The farcical plot follows one slave’s clever gamble for freedom as lovers are united, identities are mistaken, and commentary is made on the rich/poor class dynamic.  Front & Centre Stage’s Forum captivated audiences with good acting, solid direction, and smooth technical management.

“Comedy Tonight” introduced Bill Dennison as Pseudolus, who lead us through the night’s zany antics and bawdy innuendos.  Dennison gave a performance full of life and excellent comedic timing, peppered appropriately with puns and pratfalls as he jumped in and out of personas and disguises.  He is an actor who engages his whole body in each and every moment and proves that nothing is off-limits in the pursuit of laughter.

The performance was highly enjoyable and served as just another reason to praise Cumberland for its local theater.

Heidi Gardner gave a strong performance as Domina and her tender approach to “That Dirty Old Man”, was sweetly reminiscent of Meryl Streep.  Ron Growden, playing Erronius, delighted with his myopic quest to find his children – from haunted houses to hiking hills, the audience never failed to laugh.

Lovers Hero (Alex McDonald) and Philia (Kimberli Rowley) performed warm numbers, such as “Lovely” and “Pretty Little Picture.”  Rounding out the cast was Tom Valentine as Hysterium, who charmed the audience with his gentle “I’m Calm,” Ernie Poland, who brought a decided amount of sleaze to his role of Marcus Lycus, and an ensemble of comely courtesans and multi-talented Proteans.

Two surprise performances included Timothy Day as Sennex and Randy Means as Miles Gloriosus.  Day, portraying the philandering husband and father, delivered a strong and charming version of “Everybody Ought to Have a Maid.” He gave unexpected depth to his role.  I was anticipating a rather forgettable father, but was happily proven wrong as Day worked his role through its transitions.  Means arrived later in the story, but was well worth the wait as the archetypal braggart soldier.  His vocal abilities and calculated swagger earned him distinction from his cast mates.

The performance was highly enjoyable and served as just another reason to praise Cumberland for its local theater.  However, while Forum was still believable with just a keyboard and drum set – all numbers received hearty applause – it lacked a necessary life force, a bite, a passion.  Musicals, especially Sondheim, deserve full orchestras.  Community theatre in Western Maryland has slowly lost each instrument over the past decade and productions have sadly dwindled.

All in all, it is a shame that such an enjoyable performance played for only one weekend, but such is the nature of the beast.  I encourage all to keep their eyes open for other Front & Centre Stage Productions and treasure them while they last.  While Forum may have lived only for one weekend, the company will continue to thrive.

Running Time:  One hour and 30 minutes with a 15 minute intermission.

A Funny Thing Happened on the Way to the Forum was presented one weekend only by Front & Centre Stage Productions at the Cumberland Theatre, 103 Johnson Street  Cumberland, MD 21502.  Visit here to learn about future events at Cumberland Theatre.