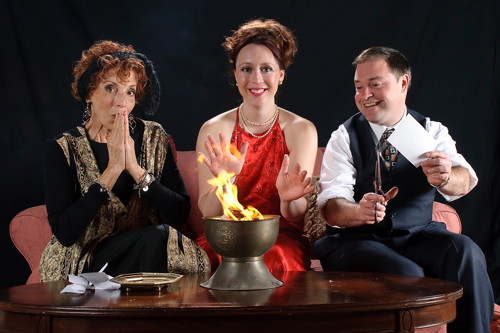 Some plays are 120 solid minutes of sorrow, showcasing the vulnerable hell that is the human condition. Others ask its members to see themselves as cogs in an oppressive machine and some plays want you to return home from your night out on the town numb, guilty, disgusted, wondering if the world is actually dreadful all in all. Additionally, some plays think daily life has enough adversity and doubt as it is thank-you-very-much, so how about a little light-hearted entertainment? Bell, Book and Candle belongs in that last category and it was this play that enjoyed its opening night on September 14th at The Colonial Players of Annapolis.

The English playwright John van Druten created this Broadway hit about a witch in New York City back in the 1950s.  His first play, Young Woodley, was banned across the pond for tarnishing the reputation of the public education system.  Undeterred, van Druten brought himself to America to write and stage the truth as he knew it: people are a little scandalous, and it’s fun.

Director Debbie Barber-Eaton’s tender feelings towards this play were palpable.

Bell makes gleeful references to one of the juicy topics of the day, Kinsey’s report on American men and women’s sex lives.  It rolls its eyes at the House Un-American Activities Committee, which assigned itself the sisyphean task of keeping people decent and in line.  Witchcraft, a subject never too near and dear to the heart of Christian America, is the catalyst of the plot.  Magic is a source of problems, attracting a bit too much attention in the human community, but it’s more playfully wicked than menacing.  The Crucible this ain’t – no one has to die.  Like I said: light-hearted entertainment.

Gillian Holroyd (Ali Vellon) is a twenty- or thirty-something witch and landlady.  Sashaying about her apartment in backless evening gowns all glitter and skin, we the audience members think “vamp” when we look at her.  In the mood, a bit bored perhaps, Gillian explains to her familiar, a cat named Pyewacket, that she’d like a man in her life.  In setting her sights –and spells — on the upstairs tenant Shep Henderson (Jason Vellon), the witch kills two birds with one stone.  Shep is engaged to Gil’s schoolyard enemy, and she is not below making someone she barely knows anymore miserable.

With a magical incantation from Gillian, Shep is over-the-moon in love with her.  The witch is content with many of the trappings of a relationship – sleeping with him, eating with him, going out to museums and such – but struggles with the glue that really holds a couple together.  Shep wants to know about her past, to meet all the other people in her life, and to establish where their relationship is heading.  Gillian puts up a great deal of resistance, as she has a limitation: witches can’t love.  A wacky aunt spills the beans, a brother and a book deal threaten everything, a cat becomes unpredictable, and a mask is thrown to the ground.  Where will everybody stand at the end?

The Vellon duo were handed quite the challenge: make people root for you, even though one of you is a bit unfeeling by nature, vengeance and infidelity made your union possible, and you only have so much time on stage.  Ali and Jason performed admirably, although timing and energy lagged at times.  The audience enjoyed the non-preachy story of redemption they presented.

Jason Vaughan, in the role of Gillian’s brother Nicky Holroyd, was great to watch.  It was clear he had a good inner sense of who his character was.  Carol Cohen made a thoroughly enjoyable Queenie Holroyd, the eccentric, indefatigable aunt with a passion for feathery hats and clothes.  Jean Carroll Christie, the costume designer, must be commended for her fine work on this cast.  I appreciate that the production refrained from putting Ms. Vellon in the usual va-va-voom color, red.  Gillian’s transformation from isolated, otherworldly woman to thoughtful working girl was easily traced through her clothing, which lost pizzazz as the show went on.  Gillian was at her most likable in a business skirt and sensible turtleneck sweater at the end.  Jeffrey Miller was entertaining as the foolish Sidney Redlitch, an author eager to sniff out secret magical societies.

The Colonial Players of Annapolis provides “theatre in 360 degrees,” as their advertising is fond of saying.  The stage is flanked on all four sides by audience members.  With so many viewpoints to consider, blocking must have been rather trying to plan out.  The performers did a fine job of moving about frequently, affording all sections a look at the action.  The set was well done, neither too bare-bones nor too busy.  The green marble fireplace, the oriental rug, and the plushy furniture said “traditional home”; and the wet bar in the corner said “modern lady.” Lights were going down and going up left and right in Bell; my compliments go to Eric Lund for handling the demands expertly and flawlessly.

Director Debbie Barber-Eaton’s tender feelings towards this play were palpable.  The Colonial Player’s production of Bell, Book and Candle would be nice to drop in on should a person find themselves in lovely Annapolis one evening, hoping to keep a good mood going.

Running Time:  Two hours and some change, with a 15-minute intermission

Allie J. Lundquist is a recent Muhlenberg College graduate with a BA in English Literature. A sizable portion of high school was spent in theatre class and in auditoriums, learning and rehearsing. Although she pursued other interests in higher education, the theatre craft was always in the perifery, and now she's dipping a foot in again. She hopes that the perspective her reviews come from, that of the common man, is appreciated by the readers of the MTG.