Theatre Review: ‘Bengal Tiger at the Baghdad Zoo’ at Round House Theatre 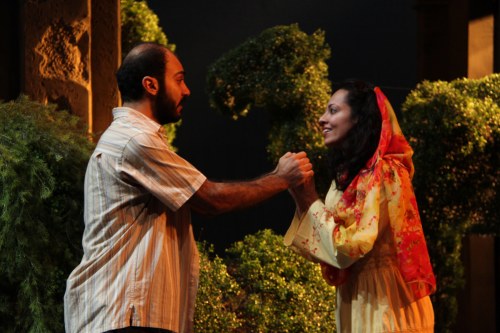 There is a song in the musical Barnum called “Bigger Isn’t Better.” When I saw Bengal Tiger at the Baghdad Zoo on Broadway, I remember thinking that it was a good show.  Robin Williams was great as the Tiger, but the theatre it was in was huge, and the production swallowed the script. I am happy to report that Round House Theatre has provided us with a great production of this play in the cozier confines of its Bethesda venue, allowing Rajiv Joseph’s script to be the main focus. 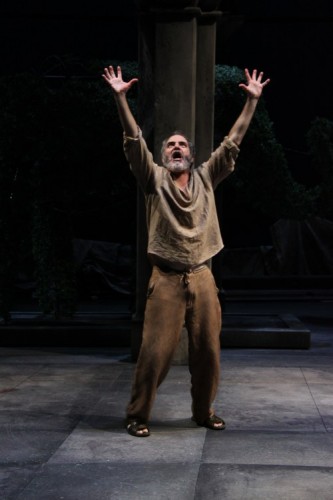 The title is a bit deceiving because the Tiger (Eric Hissom) is not who the play is really about. This is not to say that the character does not figure prominently, because he does. This is really the story of two soldiers in Baghdad, Tom and Kev (Danny Gavigan and Felipe Cabezas), and the effect the war has on each of them. Kev has gone crazy and is admitted to the psych ward after killing the tiger that ripped Tom’s hand off. Kev has hallucinations of the tiger and, later in the play, Kev tries to do something unthinkable to himself. Tom, who now has an artificial hand, hires an interpreter (Maboud Ebrahimzadeh) who in turn is asked by Tom to do some pretty outlandish things–one thing being to interpret his requests to an Iraqi woman (Nadia Mahdi). Now, why would this be outlandish? Because, given his injury, he can no longer satisfy his body’s desires himself, he asks the woman to do it for him. There is a twist in this scene, which I am not going to reveal, but you won’t believe it.

The Tiger is the philosopher and narrator for the piece, and Eric Hissom plays him really well.  It is totally different from Robin Williams, and I think better. As much as I liked Williams, I felt he played up the laughs a bit too much.  Hissom, on the other hand, plays Tiger more subtly, which is a good choice. I always wondered why the NY producers felt they needed a star in this role. If you hire the right actor for the role, which Hissom is, there is no need to go with a huge name.

‘Bengal Tiger at the Baghdad Zoo’ will leave an indelible impression on you.

As the two soldiers, Danny Gavigan and Felipe Cabezas deliver two intense performances, Cabezas in particular. As he has his breakdown, you really get an idea of what the war does to the soldiers over there, both mentally and physically.

As Musa, Maboud Ebrahimzadeh gives a gut wrenching performance: you see what the war has done to his people. This is an example where the smaller venue helps the performance. You feel as if you are right in Baghdad with this production and you can really get inside of the characters’ psyches. 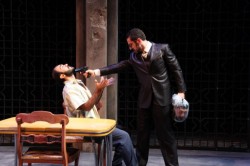 At the helm of the production is director Jeremy Skidmore, who has staged the piece intensely and honestly.

Physical elements are top notch as well. Tony Cisek’s setting gives you the idea what war does to the landscape. When we get to the ideal world of the zoo, there are some large topiaries shaped like animals.

Andrew Cissna’s lighting provides bleak images of the war zone and Eric Shimelonis’s sound gives us a very real picture of what the people of  Baghdad have had to endure.

For those who like an intense drama with solid acting and good physical qualities, I urge you to see Bengal Tiger at The Baghdad Zoo. If you saw it in NYC, you will appreciate it ten times more at Round House. If it is your first time seeing it, Bengal Tiger at the Baghdad Zoo will leave an indelible impression on you.

Running Time: Two Hours and fifteen minutes including one intermission.