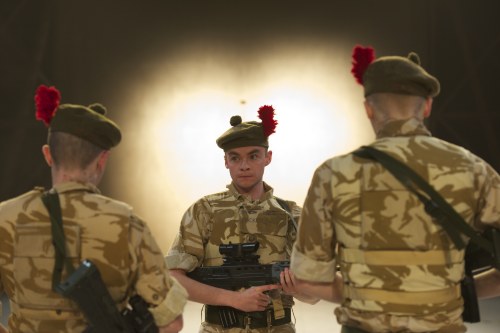 Scott Fletcher in the National Theatre of Scotland’s production of ‘Black Watch.’ Photo by Manuel Harlan.

We sat in the Shakespeare Theatre Company’s Sidney Harman Hall waiting for the show to begin.  The space was strange; we were in alley staging—the performing area lay between two facing galleries of seats.  On one end of the stage an enormous 10 by 10 by 10 steel box attracted our attention.  A continuous swoop of spotlights crisscrossed the bare stage and the audience, highlighting the well-dressed men and women looking through programs or chatting with a neighbor about this restaurant or that boutique.  Bag-pipe music raged, a frenetic, festive tune celebrating—it seemed—the arrival of The National Theatre of Scotland’s production of Black Watch.

A PA announcer told us repeatedly that in the unlikely event of an emergency we should file calmly toward an exit.  Then, a projected Scottish flag moved across the stage, focusing on the geometric center.  The music faded, followed by the announcer proclaiming with exultation the Black Watch, Scotland’s most elite army battalion, to the nation’s capital in the glorious confines of Harman Hall.  The announcement was followed by a loud tremendous slam!  And a blackout!  Moments later, the steel box opened and a lone Scottish man stepped out. 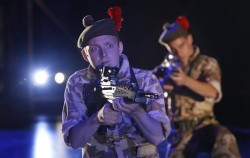 Ryan Fletcher in the National Theatre of Scotland’s production of ‘Black Watch.’ Photo by Colin Mearns.

Our journey into the Iraq War had begun.  By the time our journey ended 2 hours later, we had experienced an elaborate simulation of what life in that desert had been like for a small group of men, what life back home at a bar in Scotland was like for that same group of men, and what life possibly might be like for all of us who are forced to acknowledge that our national institutions cannot be trusted.  The celebration will continue, only with the celebrants limited to close friends or comrades in arms.

Black Watch is a uniquely powerful look into the soul of a soldier, individually and collectively, for the soldier does not exist without his unit and his unit does not exist without each individual man.  Mixing scenes of dialogue with scenes of ritual with A cappella songs and military drills, director John Tiffany carefully crafts the rhythm and tone of this challenging drama.  Just as we think we’ve had enough of the profane sports bar machismo, he takes us to the battlefield where a vulnerability exposed by fear reminds us that these soldiers are but boys playing the games of men.  Then, when we’ve had enough of the war-games, exposing our own vulnerability to the sudden shock and awe of thunderous explosions, Tiffany gives us a tender reflection of the loneliness of war and the absence of real intimacy.

Burke’s story is a complex one, mirroring the complex process that created it. At its core are a series of real life stories related to the playwright at a pub frequented by six Black Watch Iraq War veterans.  Their lead spokesman, Cammy, played with deft simplicity by Ryan Fletcher, wants us to know why he and his friends left the Black Watch.  His comrades at the pub—Granty (Richard Rankin), Rossco (Adam McNamara), Stewarty (Chris Starkie), Macca (Cameron Barnes), and Nabsy (Gavin Jon Wright)—each have their own reasons for dissolving their association with the army, and each actor gives his working class character a robust, clear self and expression.  By contrast to this clan of lads, the character of playwright Burke, played with wonderful humility by Robert Jack, not so skillfully negotiates the suspicious and sometimes dangerous terrain of soldiers wounded by war.

To this interview format, Burke offers a collection of fictionalized war scenarios that document the Black Watch’s second deployment to Iraq, just outside of Fallujah before and during the well-publicized assault on the city in 2004.  For those who remember, the battle for Fallujah was the bloodiest, most violent event of the entire Iraq War.  These scenes employ an additional three actors, two as soldiers Kenzie and Fraz (Scott Fletcher and Andrew Fraser), and one as an officer, played by Stephen McCole.  Jack will also skillfully play the men’s stern Sergeant.  Fletcher and Fraser enter the play, tearing through the red cloth of the billiard table as if from a bloody grave.  Their sentry-on-duty duet is as memorable as any vision in the production.

…a uniquely powerful look into the soul of a soldier, individually and collectively…

In addition to this dichotomous pairing of oral history and fiction, historical Black Watch marches and songs were added to the performance text, and then given new and vital treatments by associate director (movement) Steven Hoggett, and associate director (music) Davey Anderson respectively.  Finally, punctuating this complex weave of fiction and non-fiction, tradition and originality, were the recorded historical speeches and political explanations around the deployment and eventual dissolution of the Black Watch as an elite unit within the Scottish Army. 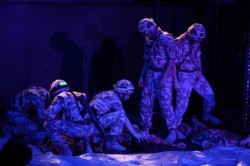 The National Theatre of Scotland’s production of ‘Black Watch,’ presented at the Shakespeare Theatre Company. Photo by Pavel Antonov.

The design team does a marvelous job balancing this hodge-podge of aesthetic media with the need to place the actors and their characters at the center of this tale of soldiers and what they represent, a military tradition rooted in 300 years of history, a tradition whose demise this play documents and honors.  Set designer Laura Hopkins opens up a huge playing space in the center of the auditorium; yet, on either side within towering metal structures, she provides a variety of elevated playing spaces.  Other than the occasional chair or stool, the only object to inhabit the vast stage is a billiard table, which the actors roll on and off with muscular exhilaration.  The actors then transform this table into numerous objects of import during the play.  Colin Grenfell’s lights give excellent definition to the space and focus to the action while Jessica Brettle’s costumes combine both the individuality of character with the collectivity of army identity.  Finally, the sound (Gareth Fry) and video (Leo Warner and Mark Grimmer) designs heighten both the realism of war and, ironically, the theatricality of violence.

To be sure, Black Watch gives us insight into the identity and history of Scotland’s military tradition as well as its cultural heritage rooted in popular performance forms.  Ironically, however, with the war in Afghanistan still raging, despite our nation’s almost unnatural silence about what that war really is, Black Watch also provides us with a window into our own country’s dilemma.  What happens when the fictions that support a war are undermined and weakened?  What happens when the soldiers’ dreams of honor and glory become little more than a job, or worse a job which cannot be completed?  Given our culture’s inability to look at difficult truths about ourselves, we should be grateful that the National Theatre of Scotland had the courage to look honorably at its own difficult truths and to share its discoveries with us.  The hope, perhaps, is that a little of their courage will rub off on us.

Advisory: Mature themes and profanity, plus loud explosions and strobe lights, and no late seating allowed.