Theatre Review: ‘Carnival of the Animals’ at Puppet Co. Playhouse 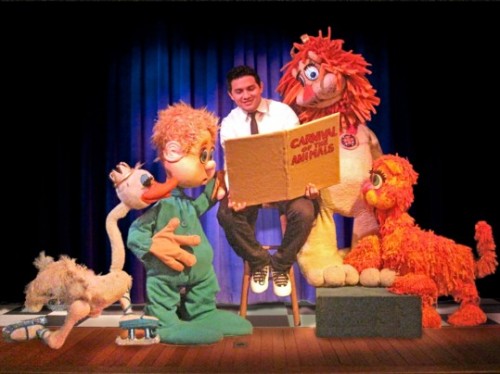 Christian Beltran as the narrator. Photo courtesy of The Puppet Co.

What do you get when you mix two men dressed in black, life-sized puppets, glow in the dark ocean life, and classical music seemingly written to bring all of these elements together?  The answer – Bob Brown Puppets’ Carnival of the Animals, or the Spanish title of Carnaval de los Animales presented by The Puppet Co. Playhouse.  This bilingual menagerie of puppets come to life with Bunraku-style puppetry and the fourteen movement musical suite of the same name created by French composer Camille Saint-Saens.  Each movement celebrates different animals in an upbeat and unique way.

A Spanish and English speaking narrator, a charming Christian Beltran, guides the captive audience through each harmonious step of a young boy puppet’s mid-day dream.  The stage is a little boy’s bedroom, bursting with everything a young boy could want:  a toy box, a chalkboard, a radio, and a rocking horse the size of his bed!

The whole show was a thrill and a joy to watch.

The two men dressed in black Bunraku-style, which is a Japanese term for black theater, are Creator Bob Brown and Christopher Piper.  They create the movements, personalities, and emotions of all the puppets.   Brown and Piper quickly fade into the background, as the puppets take on a life of their own.

The first part of the puppet’s dream begins with Camille Saint-Saens first musical movement, “Introduction and Royal March of the Lion.”  The overture is soft and light as a small hand held loin puppet emerges from the now sleeping boy’s arms, and as the music grows louder and stronger, so does the lion, soon becoming as tall as the man directing its actions. 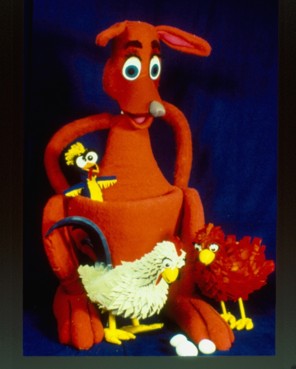 A kangaroo, two chickens and a bird. Photo courtesy of The Puppet Co.

The music moves quickly through the fourteen movements, joined by the animal puppet of the same name.  In the fifth movement, “L elephant” (The Elephant), the boy’s bed transforms into an elephant’s face as the ears appear from the sides of the bed and the trunk pops out of the footboard.  Another variation of puppetry is enjoyed in movement seven, “Aquarium.”  A fish swims off the boy’s chalkboard and meets up with another six or seven fish swimming in an ocean created by dimmed stage lighting and glow-in-the-dark fish puppets.  Again, as the music gets stronger, other ocean life comes out and a game of chase ensues.

In movement twelve “Fossiles” (Fossils), glowing bones dance as individual hand puppets and then come together, piece by piece, to form the entire fossil of a very friendly looking dinosaur.

The whole show was a thrill and a joy to watch.  Each child, young and old, was held gloriously captive by visual scenes and auditable notes that would be welcome in anyone’s best dream.

Carnival of the Animals plays at the Puppet Co. Playhouse through October 7th at Glen Echo Park, 7300 MacArthur Blvd., Glen Echo, MD 20812.  For more information or for tickets, click here.