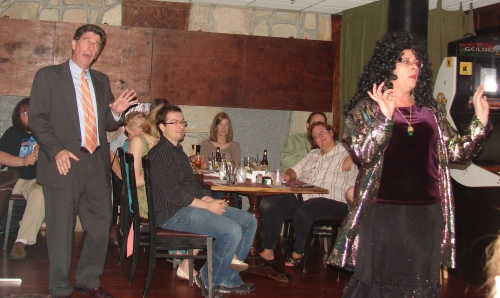 The inaugural night of Do or Die Mysteries at Flanagan’s Harp & Fiddle, an Irish pub and restaurant in Bethesda, took place on September 14th to an appreciative, intimate gathering with a murder mystery called Drop Dead, Gorgeous!

You would think that a busy pub on a Friday night would be too loud to hear the performers talk, but this is not the case.  Tucked away in the back of Flanagan’s is a cozy hideaway; a private room with stone walls, comfortable chairs, and a TV and video arcade game that is turned off.  No need to watch TV for entertainment or play a video game since the live, interactive murder mystery will provide you with plenty of laughs, all without the need of a recorded laugh track.

What is more, before the show you get to enjoy an all-you-can-eat buffet.  There’s not a lot of food choices like a typical buffet.  The philosophy here is to have a few items of high quality, rather than a bunch of so-so, out-of-the-can food.  This pays in their favor with lots of flavor. (Should I trademark that?) In particular the homemade mashed potatoes were scrumptious.  I suppose that’s to be expected at an Irish pub!  The other items included salad, fresh green beans, chicken, pasta, and more.  Sadly, the evening I was there, there was no offering of dessert.  Even though my sweet tooth wasn’t satisfied, the show that followed helped to fill me up with gladness.

On each table, every guest receives a piece of paper with a question to ask one of the characters during the portion when each of them goes table to table.  This is, after all, interactive theatre.  But rest assured, you can be the life of the party by asking lots of questions or just be a laughing spectator.

Just before the show is about to begin, CJ Crowe, the writer and director, prepares the audience for what they are about experience. This includes reading everybody her own version of the Miranda Rights: “You the right to remain vocal….If you don’t have a lawyer joke, one will be provided for you….Let the mystery begin!”

While the script is improvised, there is a basic scenario that is followed.  Drop Dead, Gorgeous! is about a legendary former Supermodel named Georgianna “Gorgeous” Traylor (CJ Crowe).  Since her retirement, Gorgeous has developed a line of cosmetics.  Her brother Ken Traylor (Sean Cleary) is the business manager for the company, Traylor Enterprises.  Nigel Strongbottom (Pat McPartlin) is Georgianna’s ex-boyfriend who was asked to be her escort at the launch of her new product, a cologne dubbed “Dollars and Scents.” Georgianna wants to be the spokesperson for her product but her friend, Barbie Dahl (Mary Wakefield) and Hardly Davidson (Ashlyn Thompson), an inspiring inventor, feel that they deserve to be in the limelight.  After the murder takes place, all the suspects are then rounded up and interrogated by Detective Justin Case (Sid Curl). 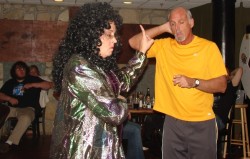 Drop Dead, Gorgeous! is outrageous, clever, and drop dead funny!  CJ Crowe has created a special formula that she uses to execute each of her murder mysteries and it works.  She has also assembled a team of actors that pulls it off much of the time.

Two characters that were smartly written were Barbie Dahl and Hardly Davidson.  The character Barbie is very energetic and peppy.  In contrast, Hardly Davidson is calm and stoned.  In these roles, Mary and Ashlyn played off of each other so well that the comedy seemed to flow naturally, almost like Felix and Oscar in The Odd Couple.

There was also a stark contrast between the characters Georgianna and her brother Ken.  Georgianna, for example, wore a very flashy silver coat while Ken was dressed in a conservative suit and tie.  CJ as Georgianna is all too funny delivering one liners like when she shows off her jewelry and says, “I’m a bunny rabbit, I do love those carots.”

Pat McPartlin did a fine job as the ex-boyfriend, working the room and exuding a confidence that made him enjoyable to watch and a personable attitude that made it even easier for the audience to interact with him. 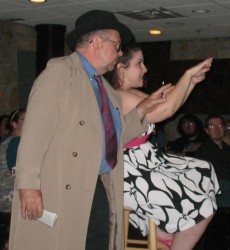 Sid Curl as Detective Justin Case looked as if he walked out of an old black and white mystery movie and onto the stage.  Sid was gruff and tough and took command at organizing the interrogations which included audience participation to help ask questions and vote on the killer.

As with any written play or improvised comedy in this case, timing is critical.  For the most part this production is successful, garnishing many fruitful laughs.  The pacing, in particular with transitioning from one scene to another however, could have been a bit sharper.  As I did see the first performance in the new venue, I’m sure the pacing will only get better with time.

At the end of the evening, the case is solved and the audience is invited to stay after the show to hang out in the bar to continue the evening.  The night I was there a live band was playing.

Overall the evening was quite enjoyable and the production is recommended if you are looking to take a date or a group of friends out for a unique theatrical experience.

Running Time: 1 hour and half with no intermission.

Parking Tip: The Montgomery County parking garage says in big letters “Free Parking on the Weekend.”  It does not, however, mean Friday night as part of the weekend.  I received an enormous $45 dollar parking ticket which was written at 7pm.  Bring change for the meter and parking should only cost you a few dollars if you park on a Friday.