Set in 17th century Barcelona, Moreto’s most famous play from the Spanish Golden Age is rendered here with a pleasant mix of light-hearted comedy and quick banter. The story revolves around Princesa Diana (Natalia Miranda-Guzmán), a Barcelonan count’s daughter who believes love is false and contrary to reason. She doesn’t want to marry anyone despite her father’s insistence, and her disdain is met by three suitors, one of whom, Carlos (Ignacio Garciá-Bustelo), confides in his servant Polilla (Antonio Vargas) of his love for her. The clever Polilla then nimbly orchestrates a devious plan to win over the count’s daughter and help her find love’s rage.

Directed by Hugo Medrano, the play’s fast-paced and witty dialogue doesn’t feel overworked by Vargas, Garciá-Bustelo or Miranda-Guzmán. And although it’s farcical at times, a bevy of comical songs and light music also mix in well with the plot, which includes the typical missteps, misunderstandings, word play, and slapstick of the time. One particular song, by an anonymous 17th century composer, made nearly the entire audience laugh aloud.

…a pleasant mix of light-hearted comedy and quick banter

Similar to Shakespeare’s A Comedy of Errors, El desdén con el desdén is based on aspects of four plays by the Spanish master Lope de Vega. Intellectual battles on the causes and reasons for love dominate most of the arguments between Diana and Carlos, though Polilla steals the show by working both sides of the disdain. 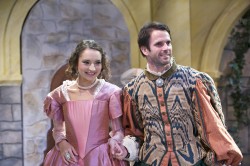 Although the entire play is performed in Spanish, two overhead flat-screens keep pace with subtitles of the dialogue for non-Spanish speakers. It can be difficult to switch between the screens and the actors because of the quick banter, but the play is strong enough that you can miss a few lines to watch the actors and still follow the plot.

The Gala Theatre is also a beautiful venue to see what the Washington Post once called, “an institution of which the entire city of Washington ought to be proud and ought to support.” The theater was completely refurbished and opened again in 2005, 29 years after it was closed and boarded up. The ornate ceiling of the original theater’s main historic dome is now lit up by the lighting design of Joseph Walls. Set designs by Elizabeth Jenkins McFadden and costumes by Alicia Tessari Neiman are also well constructed and complement the 17th century themes.