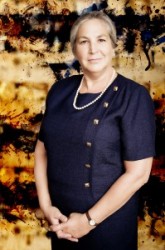 On the eve of Yom Kippur, 1973, the world stands on the brink of war.  Egyptian soldiers cross ceasefire lines to the south of Israel, on the West Bank of the Suez Canal, while to the north, Syrians attack the Israel-held Golan Heights. The fate of an entire nation hangs in the balance, and that fate is in the hands of 75-year-old Golda Meir, Israel’s first female prime minister.

This, then, is the setting of Golda’s Balcony by William Gibson, now playing at Vagabond Theatre: a world in turmoil, held together by the desperate hopes of a people and their strong, stalwart leader. Seated at a table, Golda (Amy Jo Shapiro), muses on the way her life has led up to this moment and in turn provides a moving reflection on the history of the nation of Israel itself. This is Golda Meir, who cut a grandmotherly figure, who was said to make pots of chicken soup for her soldiers. But, as she is quick to point out: “At the bottom of the pot is blood.”

The collaboration between director Miriam Bazensky and actress Amy Jo Shapiro has created something truly remarkable.

It’s a little incongruous, this woman, stumbling around in her flower-patterned dress, her pearl necklace, sensible shoes, chain-smoking and discussing the way she brought her country to the brink of nuclear war. Meir, in all her matronly glory, discusses without shame or hesitation the choices of her life: walking into a Cypriot concentration camp to convince adults to give up their freedom in exchange for the freedom of the camp’s children; choosing the future of Israel over her husband and her family; standing on the observation deck (the eponymous balcony) of Dimona, a center for Israel’s nuclear proliferation; blackmailing Henry Kissinger with the threat of a “new Masada.” Through it all, however, is the indomitable spirit of a people, and its will to survive. “Survival,” Meir says wryly, “is maybe a synonym for Jewish.” 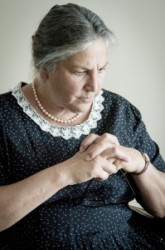 One-woman shows, particularly of the long-form variety, are notoriously difficult to pull off, usually relegated to comediennes who are more than comfortable talking about their own lives. But Shapiro has inhabited the existence of Golda Meir, bringing her to life in a way that makes this two-hour piece seem more like a confessional conversation than a show. She hits all the right notes, tearing up at the thought of her grandchildren threatened by Arab soldiers in a Negev kibbutz, wrestling furiously over the decision to develop Israel’s nuclear weapons program, unrepentant about the men with whom she fell in love. She reacts to the real photos projected on the wall behind her as if they were her own husband, her own friends, and her own cabinet. To bring such vibrant, brilliant life to an historical character of such great import is no mean feat, and Shapiro succeeds admirably.

Golda Meir’s story is the story of a nation—from the Zionists working in the kibbutzim, to the struggle under British rule, to the problems of independence and the fight to keep it, Golda’s Balcony reflects a life that simply was Israel, even when Israel lacked an official name. It is at once fantastic, heartbreaking, and not a little inspiring. The collaboration between director Miriam Bazensky and actress Amy Jo Shapiro has created something truly remarkable.