Theatre Review: ‘How I Became a Pirate’ at Pumpkin Theatre 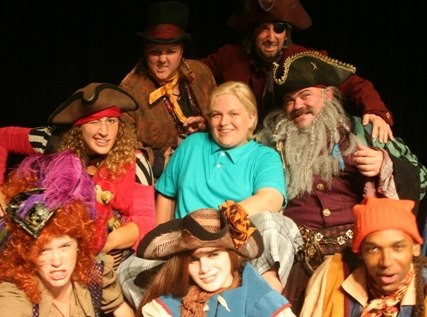 After seeing the Pumpkin Theatre’s How I Become a Pirate, based on the children’s book by Melinda Long, there is nothing I want more than to become a pirate!  I want to walk the plank, swab the deck, ride my pirate ship over the big waves, find treasure and then bury it where X marks the spot!

Director James Hunnicutt navigates deftly through all the fun songs, dancing, costumes and jokes to show that pirate life is the only life worth living.  For 50 minutes, six fantastic pirates and an adorable boy held me captive.

Weigh anchor, hoist the mizzen, and sail as fast as you can to this show!

B Thomas Rinaldi does a wonderfully animated job as Captain Braid Beard, leading his merry band of pirates off to one adventure after another.  During their most recent adventure, finding the perfect place to bury their stolen treasure, the band of pirates comes across young Jeremy Jacob (played by Connor Moore) in his backyard. Of course, they immediately recruit him.

Jeremy is wide-eyed with wonder as the swashbucklers show him how to be a pirate through catchy, foot stomping songs like, Talk Like a Pirate, Batten Down the Hatches, Read the Map and Pirates Dot Arrggggh.  The actors that play other pirates, Derek Cooper (Swill), Laura Malkus (Max), Amanda Rife (Pierre), Anthony Scimonelli (Sharktooth) and Sarah Wincehell (Scurvy Dog) are alight with enthusiasm and joy as they run up and down the theatre aisles and ask the many children in the audience to dance, and Moore fits in immediately with his energetic singing and acting style.

In the end, Jeremy and the pirates find the perfect place to bury their treasure, back where their adventure began, in Jeremy’s backyard. That is when Jeremy realizes that all the adventure and treasure he needs was always in his own backyard, with his own family.

Completing the fantastical world of the pirates were the costumes.  Wil E. Crowther must create his costumes by plucking images of pirates directly out of the minds of children.  Whimsical, fun and lively, each one is perfection!

Weigh anchor, hoist the mizzen, and sail as fast as you can to this show!

How I Became A Pirate plays through September 23, 2012 at the Pumpkin Theatre – St. Timothy’s School, 8400 Greenspring Avenue, Stevenson, MD  21153.  For tickets purchase them online.