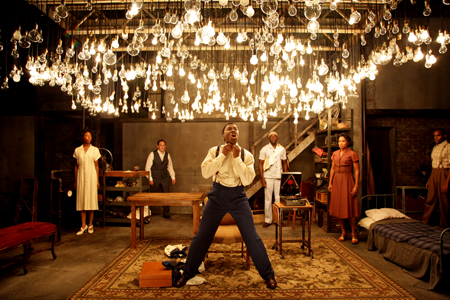 Ralph Ellison published Invisible Man in 1952.  In 1953, during his acceptance speech for the National Book Award Ellison focused on the novel’s “experimental attitude,” noting that it must be possible for “fiction which, leaving sociology and case histories to the scientist, can arrive at the truth about the human condition, here and now, with all the bright magic of the fairy tale.”  Occasionally, writers achieve what they hope to achieve: with Invisible Man Ellison succeeded brilliantly.

Occasionally, adaptations of master novels for film or for theatre achieve what they must achieve, capturing dramatically in several hours what narratives capture in days of patient listening.  And they must do that without losing the original’s essential stylistic verve.  Usually, they don’t, leaving the viewer dissatisfied and yearning for the original.

Studio Theatre’s production of Oren Jacoby’s adaptation of Invisible Man, I’m thrilled to say, succeeds brilliantly.  Not only does this production give the theatregoer a full-scale sensual onslaught combining history and theatre, video and live action, special effects and moments of intense drama, but it also blends those highly contradictory elements with a careful, disciplined finesse rarely experienced in this rapid fire, “we don’t have time to sweat the small stuff” age.  This Invisible Man is spectacularly luminescent. 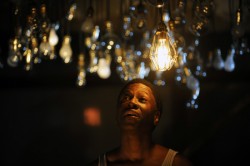 Both the novel and play begin at the same point in the story — at the end.  The unnamed narrator, the Invisible Man, lives rent free in a subterranean basement in New York City that has been closed off and forgotten for decades.  The narrator, played with intense humility by Teagle F. Bougere, has made, and is making, some renovations, the most obvious being the 1000 plus light bulbs of all watts and sizes that he’s wired into the electrical system.  Captured magically by set and lighting designers Troy Hourle and Mary Louise Gelger, this moment of wonder establishes the fairy tale essence of the production.  It is not, however, the lighthearted fairy tale most Americans know.  This tale into the heart of the human condition is darker and more sinister than any Grimm might have produced.

In a nutshell, the story of the Invisible Man begins in the South with a naive but brilliant young man and ends in New York City with that same man but with every dream about life’s promises and people’s goodness shattered.  Far from hopeless, however, the story we witness fills us with a new kind of possibility, the possibility of becoming even more human after those illusions have been swept aside.  We need, as does Ellison’s invisible narrator, but to endure the bright light of those possibilities.

Mr. Bougere’s performance in this production is exquisite, as he strikes all the right notes at just the right time.  The journey that Bougere takes us on is both uniquely World War II era African American and penetratingly fundamental to all young men who enter the world thrilled by its possibilities and energized by their ideals only to have that world and its dynamics of power crush those dreams one after the other.  Bougere captures that youthful idealism with remarkable clarity and, then, with intelligence and emotional dexterity allows us to witness the ebb and flow of that innocence as he relentlessly moves toward catharsis.

The journey Ellison takes us on is rich in historical allusions, but the production does not get bogged down in the references.  The world we enter resonates with history depicting the flavor of the era with skillfully crafted theatrical montages.  As the narrator grows up in the South, early on we experience a tapestry of images, sights and sounds depicting the narrator’s roots.  Contributing greatly to this sense of history is the work of Alex Koch from Imaginary Media who uses three different projection surfaces to envelop the audience with a combination of historical photographs and film footage as well as constructed images.  Never distracting nor superfluous this dimension of the scenography played a crucial role in making the fairy tale into a meaningful vision of transformation.

Even though this production had fantastic visual elements there is no doubt that the acting ensemble carried the day, providing us with a host of rich characters, sometimes symbolically significant, at other times individually unique.  Joining Mr. Bougere in Invisible Man are McKinley Belcher III, Brian D. Coats, Johnny Lee Davenport, De’Lon Grant, Edward James Hyland, Joy Jones, Jeremiah Kissel, Deidra LaWan Starnes, and Julia Watt; and there literally is not a blemish among them.  Each plays three or more characters, and each gives his or her various characters their unique yet identifiable stamp, allowing the audience to immediately gain insight into who they are.  To be sure, costumer Kathleen Geldard did a fantastic job, succeeding in capturing the individuality of each character within the historical frame.

One of the first power-brokers the young narrator meets on his life’s journey is Mr. Norton, a rich white trustee of the Black College he attends.  Mr. Hyland’s portrayal of the sympathetic elder is immediately galvanizing. When the narrator innocently takes Mr. Norton into the rural areas surrounding the university, they encounter an African American farmer named Trueblood.  Mr. Belcher plays the man, who had incestuous relations with his daughter, with an hypnotic simplicity.  After returning the now-shaken Mr. Norton to campus, the narrator introduces us to the play’s first African-American power-broker, Dr. Bledsoe, the college’s president.  Mr. Davenport plays this powerful authoritarian with sinister grace.  Thus, when he first chastises the narrator for his lack of judgement, then expels him, before then sending him off to New York City with letters of recommendation, we hope that Bledsoe’s duplicity might not be the case.

The power of Ellison’s tale and of this production is that no one is spared.  The more the young man searches for a group to which he might belong, the more brutal his disappointment becomes.  Although the story is most definitely rooted in the historical conditions of racist America, circa 1945, and those are the conditions that the young narrator does his best to navigate, the production does much more than simply memorialize the past or pay homage of a great novel.  The young man’s quest to find brotherhood is as universal as the issues he confronts.  The powerful forces that seek to stifle his success might not take exactly the same form today, but they are no less rigid and full of ego and ideology than they were 60 years ago.

Several other characters stand out in this production.  After discovering Bledsoe’s betrayal, the narrator takes up residence with Mary Rambo.  Ms. Starnes portrays the play’s kind hearted mother figure with a beautiful sincerity, a sincerity that overcomes the story’s growing cynicism.  When the narrator finds dignity and respect in the Brotherhood, an allusion to the World War II era Communist Party he meets Brother Jack.  Mr. Kissel humanizes Jack’s commitment to the cause, allowing us to believe as much in the promise of equality as the young narrator did.  Finally, at the Brotherhood, the narrator befriends Tod Clifton, played by Mr. Grant with subtle complexity.  Grant’s portrayal not only captures Clifton’s honesty but also his genuine fear when he meets Ras (played by Belcher), the Black Nationalist leader who ridicules the young men for working with the White Man.  One of the most emotional moments in the play occurs later when we see the defeated Grant’s Clifton selling Sambo dolls on the street for a quarter a piece. 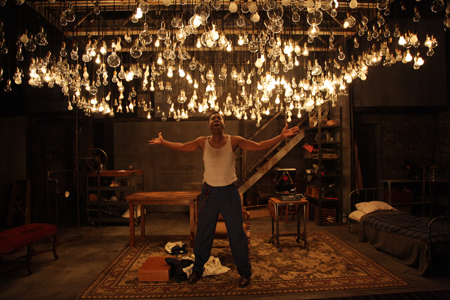 Director Christopher McElroen truly did a magnificent job with this production, as he handled the play’s complex ensemble and scenographic elements with a master’s touch for rhythm and focus.

This production of Invisible Man is a remarkable achievement.  Studio Theatre and its co-producer, Huntington Theatre Company of Boston, where the show will open this coming January, should be commended for tackling this project.  Of course, the University of Chicago’s Court Theatre must be given the highest praise, as they were the institution that first brought the stage version of Ellison’s novel to life, premiering it in January 2012.

More often than not, America’s history and literature are swamped by the glare of her teeming lights.  The popular usually obliterates the profound through glitter and pizazz.  As the narrator tells us at the play’s beginning: “My hole is warm and full of light. Yes, full of light. I doubt if there is a brighter spot in all New York than this hole of mine, and I do not exclude Broadway.”  This Invisible Man might not make it to Broadway, or to the Silver Screen, but it most definitely is a bright spot that must be seen.