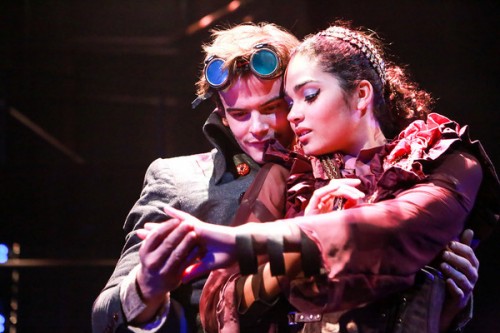 When I heard that Synetic Theater was offering its own Jekyll & Hyde, I was immediately intrigued. How might this company, with its unique wordless storytelling style, tackle this timeless tale of the battle between good and evil? To be sure, the style would be different, for every Synetic production delivers the essentialized story, the physicality of performance, the heightened emotions, the actors who move/dance, the music that soars. Regardless of aesthetics, however, the story always wins the day, and with Dr. Jekyll that would be true in spades.

Synetic Theater’s Jekyll & Hyde, adapted by Nathan Weinberger and Paata Tsikurishvili, is truly one of the most disturbing pieces of theatre that I’ve seen in years. The work of director Tsikurishvili, his team of designers, and his actors—particularly Alex Mills as Dr. Jekyll—transports the audience to an otherworldly domain inhabited by people and creatures quite like ourselves, but terrifyingly so. “Is this what we are?” we ask ourselves. “Have we become this?” Yet, despite the many gifts of Jekyll & Hyde, some of the show’s choices undercut the emotional seriousness the production achieves.  Although this dissonance does not derail this incredible production, it does work against it, weakening what might have been phenomenal. 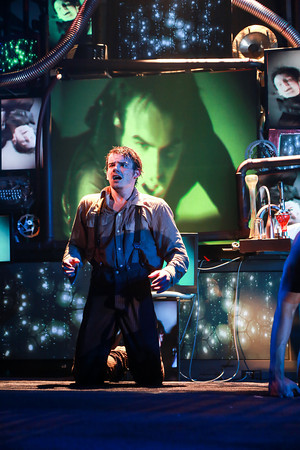 The Strange Case of Dr. Jekyll and Mr. Hyde by Robert Louis Stevenson was originally published in 1886, two years prior to the infamous unsolved case of Jack the Ripper. The following year, the first stage adaptation, Thomas Russell Sullivan’s Dr. Jekyll and Mr. Hyde, opened in Boston, which then—spurred by the Ripper—went on to tour London for 20 years. Since then, over 125 film and stage adaptation have been produced—yes, that’s one every year since the book was originally published.

What has always intrigued people about the tale has never been the Stevenson story itself, but rather the idea of the story. A good man in his quest to conquer the evil that haunts him turns into that evil and, then, must destroy himself or watch the evil win; it’s Oedipus retold in moral terms for modernity. No stage or film version of the tale has stuck to the original plot, which is primarily a detective story without the romance or the Ripper escapades.

In this regard, Synetic’s version is no different; they inject a Jekyll marriage and a lethal dose of Ripper into the tale. What they inject that’s unique, however, is the obsession of the current age—in fact, it has come to define the age—and that’s technology. Synetic’s Jekyll & Hyde is a cyborg, fusing Victorian mechanics with the technological wizardry of the 21st century.

Even before the show starts, Daniel Pinha’s set and Riki Kim’s multimedia design offer the audience a world in crisis: an industrial design of pipe and steel, in which, like some marvelous hypnotic oracle, sets a multi-paneled vision of flat-screens. Even the pre-show chatting audience must have wondered in what world they suddenly found themselves. Then, when Andrew F. Griffin’s lighting is added to the scenography, the synthesis and mutations of the two different worlds are complete.

When the show starts we are immediately introduced to Dr. Jekyll and his futuristic machine of lights. Alex Mills’ Jekyll is unlike any Jekyll yet devised. Instead of the Victorian man of conscience, who by will and forthrightness attempts to lead a good life, we have a more modern young man, an innocent geek—if you will—on the excited brink of discovery. With Jim Carry like pizazz, Dr. Jekyll fiddles with the human genome, portrayed with grotesque beauty by the show’s six-person ensemble. 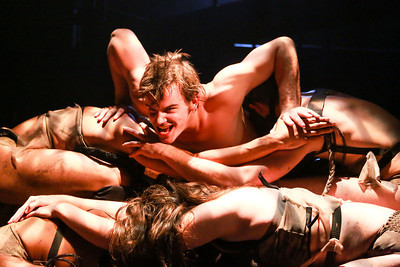 As aspects of Jekyll’s psycho-genetic landscape, Jace Casey, Chris Galindo, Austin Johnson, Julian Elijah Martinez, Karen A. Morales-Chacana, and Emily Whitworth are choreographed by the ever inventive Irina Tsikurishvili. With powerful, eclectic music by Konstantine Lortkipanidze giving them life, this cohort of kinesthetic energy transform from inert blobs to pulsing life forces. In fact, one of the most memorable moments in the production is the birth of Mr. Hyde, achieved when the fleshy ensemble simulate the egg from which the newly demonized Jekyll emerges as Hyde. As Jekyll’s hands grabble with a maze of arms and rib-cages, the head of Hyde struggles above the shell of legs until he is finally born.

The choice to make Jekyll an innocent, and not a man of free will, is a critical one, for it alters the essential argument of the Stevenson story. Instead of a man who must choose right over wrong, or marriage over hedonism—as we have in the original—here we have a man who knows nothing of pleasure. Thus, when Jekyll’s friend, Lanyon, played with earnest licentiousness by Peter Pereyra, introduces Jekyll to the world of prostitution, we see Jekyll afraid of the feminine. He squirms comically beneath a stripper’s rousing touch. Later, when that stripper, played with coquettish vulnerability by Rebecca Hausman, is kidnapped and brutalized by a manic Mr. Hyde that moment of comedy, in a play otherwise filled with the macabre and sinister, seems misplaced.

This production’s Hyde is as complex a character as one is likely to see on the stage—if character is even the right word for what he represents. Alex Mills’ spasmodic Hyde rivets our attention. When we are first introduced to this messenger from the future, he appears from the audience dressed all in black and wearing goggle-like glasses. He invades the Victorian world of low-lifes like a plague and soon comes to dominate it. All androgyny and sexual perversion, Hyde soon leaves his punkish black shell to don the feathers of a trickster-like black swan (of recent movie notoriety). In this stylized drag, his rampage of death and depravity is grotesquely horrifying.  As he seduces the wedding dress of Jekyll’s sleeping bride, performed exquisitely by Brittany O’Grady, we are certain that her fate is sealed; as we watch Hyde approach her and Jekell rage against him, we can’t help but feel sorry for the man who used to be so innocent.

…truly one of the most disturbing pieces of theatre that I’ve seen in years.

Chelsey Schuller’s costuming did a marvelous job depicting the iconographic Hyde as well as representing the various creatures and worlds of this production. From the well-dressed man of high society, the father of Jekyll’s bride, played with dignity by Darren Marquardt, to the host of society’s underbelly, Schuller captures the hybrid nature of the play’s world. 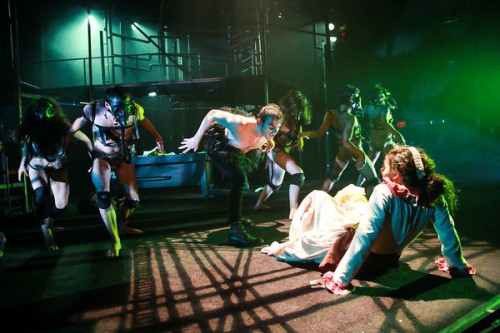 Despite how deeply disturbing Hyde’s actions and gyrations were, they were occasionally undercut by moments of camp, almost as if we were occasionally being asked to remember that this display of cruelty and perversion was only a bit of play-acting. Director Tsikurishvili may have felt that the audience needed a little reassurance, or maybe even a nervous twitter or two to relieve its own morbid fascination with the slaughter of innocence. For this reviewer, however, such 4th wall breaking moments—only occasionally added to the mix—worked not to enhance or comment on the play’s emotional integrity, but to undermine it, diminishing its potential effects.

Nevertheless, despite the production’s occasional miscues, it brings a uniquely modern look at what has surely become a Western classic. If we have surrendered, or should ever in some future time surrender, our ethical imperative to the hyper-sensations offered by technology—hoping somehow that our magical devices, our cure-all chemicals, our infinitely varied virtual worlds will replace that most human need to choose between what is right and what is wrong—then this Jekyll & Hyde should scare us all to death.

Jekyll & Hyde plays at the Synetic Theater through October 21. Synetic Theater is located at 1800 South Bell Street, Arlington, VA. For more information or for tickets call: 800.494.8497 or click here.