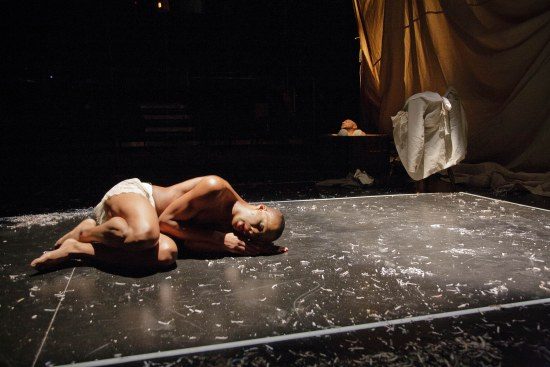 Erik Ehn’s new play, Shape, performed by force / collision at the Atlas Performing Arts Center is for the poet in each of us.

This lyrical, rhythmic drama about the life of Cordelia McClain and her estranged relationship with her husband, fellow vaudevillian star Billy McClain, offers audiences a folktalish world filled with splendid images and beautiful language, a world distilled of its historical details yet rich in iconography.  As poet Walt Whitman wrote in Song of Myself: “The pleasures of heaven are with me, and the pains of hell are with me / The first I graft and increase upon myself . . . . the latter I translate into a new tongue.”  You probably won’t fully comprehend the “new tongue” expressed in Shape, but I guarantee that you’ll be intrigued by its forms and metaphors, and its melodies will leave you slowing swaying within.

Shape is but one of 17 plays constituting Ehn’s larger project entitled Soulographie, an exploration of genocide and cultural appropriation in the United States, East Africa, and Rwanda.   Do not let that heavy description fool you about Shape, however.  The language developed here is far too esoteric to laden the spectator with grief or guilt.  What one witnesses here is a geography of sorts, a terrain inhabited not by the people of the past, but by their spritely figures.  We may catch glimmers of their humanity, but what shines brightest is their mythic remains. 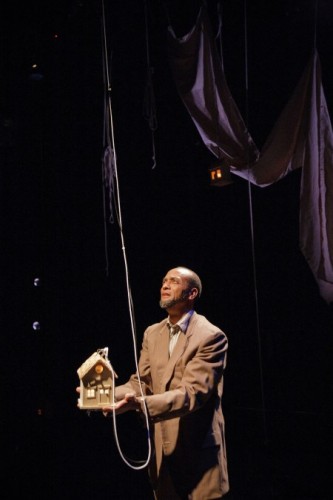 Dexter Hamlett as the Survivor. Photo by C Stanley Photography.

The play opens with the survivor, played with solemn dignity by Dexter Hamlett.  He introduces us to Fairyland, and as he does the ensemble hoists a collection of tiny houses into the air with their tiny windows lit from within.  We have entered a mytho-poetic space, designed by scenic and costume designer Collin Ranney and lit by Ariel J. Benjamin.  The world they so magically create is thick with description and metaphor, pattern and shadow.  On the one hand, it alludes to “Black America,” a historical cultural event that occurred in Brooklyn in 1895 during which 500 African American minstrels and vaudevillians recreated a southern planation for the amusement of northern whites.  On the other hand, this space for fairies invokes a host of other possibilities, from the magical performers whose authentic identities lay hidden beneath their necessary disguises—in this case, the exquisite bird masks donned by each member of the vaudevillian ensemble—to the literary fairies of folktales, who invariably play mischief on our minds.

Billy and Cordelia McClain are the king and queen of Fairyland.  Played by Frank Britton and Dane Figueroa Edidi, respectively, they lead the other performers in their daily routines and songs and dances.  Whereas Britton’s Billy is charming and unassuming, Edidi’s Cordelia commands the stage with her bold sensuality; and when she sings her voice rouses our ears to attention.  The ensemble works well together as vaudevillian singers and dancers, particularly Luci Murphy whose solo voice is clear and expressive.

…you’ll be intrigued by its forms and metaphors, and its melodies will leave you slowing swaying within.

There is trouble in Fairyland, however: Cordelia does not trust her king to keep secrets.  Secrets from whom?  From the white reporter who comes a calling and, in the process, falls magically under the sensuous spell of the queen?  Josh Sticklin plays the reporter with gusto and a wee bit of awestruck wonder at Cordelia’s lusty charms.  Later, while Cordelia is being interviewed by a French reporter in her dressing room, played with good comic effect by Karen Rosnizeck, we discover that the queen has more to worry about than her husband’s loose lips.  Her king’s dalliances will soon end their fairyland world. 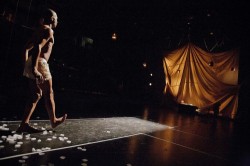 At this point director John Moletress also decides to end another aspect of the fairyland disguise.  Mr. Edidi’s portrayal of Cordelia is stunning and authentic.  When he removes Cordelia’s bodice in the dressing room, the drag is up, however.  Edidi’s performance of Cordelia continues without a hitch, but now the audience must wrestle with the confusion that the visual / verbal dissociation presents.

Given the production’s use of metaphoric expression, we can resist questions about Cordelia’s real sexual identity.  “Was the diva actually a man in disguise?” Though interesting to ponder, this question leads nowhere. We cannot, however, ignore the trumping of history by the aesthetic gest.  The production evaporates history into its chemical essences, as it were, leaving us without contextualizing markers.  As a result, not only does Cordelia’s identity dissipate before our eyes but also events—like the horrific Tulsa Race Riots of 1921 through which Billy McClain may have lived—become but small footnotes in the larger sweep of the play’s human geography.

As Mr. Edidi makes his final tortured procession across the stage as the vaudevillian diva, we are no longer trying to make sense of this Cordelia, the catwalker and buck dancer who thrilled thousands.  Rightly or wrongly, we have given up on the significance of her or anyone else’s gender, even as a construction of identity.  Man, woman, transvestite, transsexual, transgender–these labels and the histories they invoke, are now playing but a minor role in the suffering people endure.  In the end, it’s the love that twists us into knots, and it is toward that love, however distant on the horizon, we invariably walk.

Shape plays at the Atlas Performing Arts Center through October 6 and then will be part of Soulographie at New York’s La MaMa ETC in November.  Atlas is located at 1333 H Street, NE, Washington, DC.  For information or tickets to Shape click here.