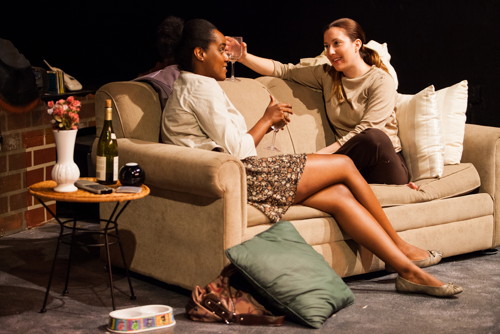 Fells Point Corner Theatre opened its 2012-2013 season Friday night with Diane Son’s Stop Kiss to a very appreciative audience.  Director Jay Gilman made some very unique, interesting choices that went over very well with those watching.  One thing that is remarkable about this opening night was that nothing went wrong.  Things always go wrong on opening nights, but this one went off without a hitch.  Kudos to everyone for that: light and sound designers and operators, stage manager and crew, set designers and builders, actors, of course the director, and almost certainly someone I am forgetting about.

It’s a very pleasant production.  The subject matter is very delicate and Mr. Gilman made it presentable; one couldn’t easily be offended.  The play is about two young women – Callie, played by Ann Turiano and Sara, played by Samrawit Belai – who are in denial about being gay, even though they definitely bring it out in each other.  The play starts with Callie in an emergency room, giving a detective what details she can on the attack she and Sara have just been victims of.  Callie wasn’t injured that badly, but Sara had the living daylights beaten out of her; she’s in a coma.  The play then goes back and forth in time, from when the girls first meet to Sara’s recovery and return to her life and family in St. Louis. In between, the girls continue to deny being more and more attracted to each other.  It sounds like that would be confusing, but it’s not.  It actually keeps the play more interesting.

Christopher Jones as George, Callie’s on-again-off-again-boyfriend-always-friend-with-benefits really stood out from the crowd.  He was right on the money almost all the time, he was believable.

Detective Cole – played by James Miller – comes in and out of the story.  The assumption is that he’s trying to find the guys who did it.  I word it that way because he really seems to be out to get Carrie.  From the start, he is hostile to her, even bullies her.  People will hide details because they are embarrassed by them.  Every cop, every detective knows that.  It doesn’t make the person suspect.  Sure, Callie’s hiding something, because the reason they were attached is that the girls were kissing.  But she’s still in denial about being gay, so she tries to hide that part.  But if someone’s just been attacked and seen her close friend (at least) beaten to a pulp, you gotta treat them gently. 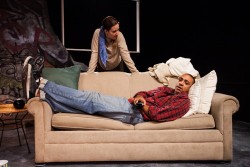 A neighbor – Mrs. Winsley, played by Jill Vanderweit – saw part of the attack and called 911.  Cole is out to get her, too.  Why was she awake at 4am?  Where is her husband?  The husband had moved out, hadn’t he?  Honestly, so what?  There is an issue with the neighbor, though.  She says she went to the window when she heard the screaming.  But she also says she heard what Sara said to antagonize the attacker.  How?  She wasn’t paying attention before the screaming started.  The detective seemed fine with that gaping hole, though.

Oh, Cole also berates both Mrs. Winsley and Callie for not protecting Sara.  What were they going to do?  Mrs. Winsley’s going run downstairs in her nightgown and pull this angry guy off Sara?  Callie should have grabbed the guy’s ponytail and dragged him off of her?  Are you kidding me?

There were problems with the production itself, the main one being that there were no levels.  The performances were all a bit one-note.  And nobody seemed to feel much.  In the emergency room, Callie seems mildly upset, but under the circumstances, I would expect a whole lot more.  Fear, panic, sadness, horror, you name it.

Christopher Jones as George, Callie’s on-again-off-again-boyfriend-always-friend-with-benefits really stood out from the crowd.  He was right on the money almost all the time, he was believable. When he was changing channels on the non-existent TV, I wondered why I couldn’t see it.  When he has to change gears instantly because he forgot an appointment he had, it’s entirely real.  That’s a particularly difficult trick to pull off, to be convincingly surprised by something you know is coming, as anyone who’s ever known they were having a surprise party can tell you.  To be fair, Miss Turiano (Carrie) had one of those moments, too.  In a phone call towards the end, you can really see her listening to the other person.

The production has almost no humor in it.  The script does, quite often, but it didn’t play.  (This is the part where I give an example of a time that happened, but I didn’t write any down and my memory ain’t what it used to be.)  Almost every opportunity for a light moment here and there was missed.  No matter how dark a play is, it must have some comic relief.  Otherwise, people start to numb out to the tragedy and/or horror that is being presented.  The ancient Greeks knew this, Shakespeare knew this.  A director really has to watch for that. 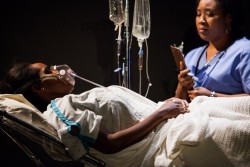 Sound designer Dan Cassin did a very good job.  I know this because I didn’t really notice the music.  You’re supposed to be affected by the sound, but not really aware of it, and his design struck that balance.  Jim Knipple’s set was interesting.  The most noticeable piece is a large – like, maybe 15×20 feet – frame between Callie’s apartment and the platform behind it that serves as the hospital room.  It would often slide out of the way to let Callie walk through to the hospital.  The director told me it was the window of Callie’s apartment.  I had guessed as much.  It was the going back and forth that confused me, particularly since it didn’t always do that.  And no, it was not an error.  I checked.  And it didn’t seem to serve much purpose.  It was pretty cool how smoothly it moved back and forth, but mostly it just stole focus the whole time, as far as I could see.

The director and scenic designer made the choice to have Callie’s apartment fill the stage, and just co-opt areas of it for other scenes as needed.  I’m not sure why.  Aside from the fact that the odds of a traffic reporter (that’s what Callie is) having enough money to have a place that big are almost non-existent, it just didn’t seem necessary.  Nothing happened in the apartment that required that much room.  It seemed they could have confined the apartment to maybe just two-thirds of the stage and put other playing areas in the rest of the space, rather than having one space serve double duty.

Maggie Masson costumed Callie and Sara in similar colors, which were similar to the couch.  When they sat down on it, they blended right in.  I wanted them to keep moving so I could be sure where they were.  So clearly, there was something being said here that I just completely missed.  Sorry about that, Ms. Masson.

I have to tell you, from talking to people in the lobby after the show, I was the only one bothered by the inconsistencies of the script, so maybe I’m being too critical.  Bottom line: the audience loved the show.  See below for logistic detail.

Running Time: Approximately one hour and 35 minutes with NO intermission.