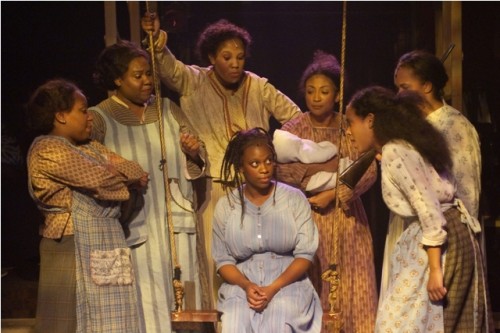 The Color Purple, the heralded Broadway musical adapted from Alice Walker’s 1982 Pulitizer Prize-winning novel and the tear-inducing film by Steven Spielberg of the same title that starred Oprah Winfrey and Whoopi Goldberg, plays out handsomely at Toby’s the Dinner Theatre of Columbia. The music and lyrics, penned by Brenda Russel, Allee Willis and Stephen Bray, and the book by Marsha Norman provided the incredibly talented cast with toe-tapping and moving gospel, blues, jazz and pop songs to showcase their amazing vocal, dancing and acting skills. Billed as a “musical about love,” The Color Purple is really about power: the power men held over women in early 20th century, impoverished rural Georgia; the power of faith; the power of family; the power of friendship; the power of positive role models; the power of self-discovery; the power of self-esteem; and yes, the power of love.

Under the direction of Toby Orenstein and Lawrence B. Munsey the cast and production crew at Toby’s delivered a breathtaking, fast-paced, stunning ride spanning four decades that allowed the audience to follow the inspiring life of Celie, an oppressed black girl, played magnificently by Dayna Quincy. 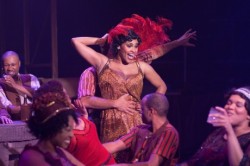 Shug (Shayla Simmons) and the cast of ‘The Color Purple.’ Photo by Kirstine Christiansen.

Beginning with the opening scene, we all fell in love with Celie.  From her days as a young teenager who was twice impregnated by her father, to the horrific loveless and abusive forced marriage to Mister (Mark Anthony Hall), to her longing for her sister Nettie—presumed dead—(Jessica Coleman), her losing faith in God, to her developing friendship with Sofia (Theresa Cunningham), to her undying love for Shug (Shayla Simmons), the audience cheered Celie on as she traveled along her journey in life where she bonded with strong women and tried to overcome every obstacle that was thrown in her way.

The saga of Celie is cleverly augmented with letters from Nettie who fled their abusive father to join missionaries in Africa.  Celie also encounters other folks who also have their own challenges that are woven throughout the plot.  Together, they all find their own voices, their own places in the world, and through inner strength, succeeds.

The score defines this journey with tender ballads and rousing uplifting numbers.  The entire cast exhibit powerful vocal talents with the leads offering star-caliber performances.  As solos, they are all phenomenal.  As duets or in combination with the excellent ensemble, they are equally strong.

Dayna Quincy as Celie moistens the audience’s eyes with “Somebody Gonna Love You” and an astounding rendition of “I’m Here” at the show’s end.

Shayla Simmons as Shug Avery—the mistress of Celie’s abusive husband Mister—is a masterful performer. Shug becomes Celie’s love interest, and that relationship is handled tenderly even when the intimacy ended as Shug moved on to be with a man. She nurtured Celie not only physically but also emotionally. She gave Celie the strength and courage to be more assertive and to help find her way. Her renditions of “Too Beautiful For Words,” The Color Purple,” and the song “What About Love?” with Quincy were nothing short of spectacular.

Another standout is Mark Anthony Hall as Mister, Celie’s husband.  Mean, abusive, subjugating, Hall commands the stage with his bouts of rage.  Every time the audience heard him shout, “Celie!” there was a collective groan and fear enveloping the audience as they knew nothing good was about to transpire. Hall’s magical baritone is evident in “Mister-Nettie” and “Celie’s Curse.”  Mister eventually changed into a nicer person following the “curse” and was responsible for helping Celie and Nettie to re-unite after 40 years.  But his villainous character set the tone for the drama early on.

Theresa Cunningham played the role of Sofia, a strong-willed, physically dominating woman. She tells it like it is with no concern for the consequences. While not called upon to perform solo selections, she was superb in “Hell No” and “Miss Celie’s Pants.”

There were also the Church Ladies—Darlene (Crystal Freeman), Doris (Tierra Stickland), and Jarene (Kelli Blackwell). They appeared throughout the production at various times offering comically sarcastic commentary and other insights through their melodious voices. They glowed in “Mysterious Ways” and “A Tree Named Sofia.” 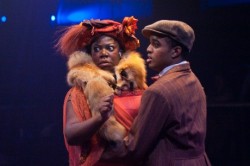 Other cast members shone as well.  David Little as Harpo and Ashley Johnson as Squeak provided some comic relief throughout this mostly intense show.  They performed nicely together in “Brown Betty.”

Anwar Thomas’ choreography is also a special component of this production’s success.  Dancing to foot-stomping rhythmic beats, the performers excelled in such numbers as “Big Dog,” “Push Da Button” and the percussion-dominated “African Homeland.”  Physical power and grace characterized the wonderful performances.

Co-director Munsey is also the costume designer as he so often does at Toby’s. He created early 20thcentury working clothes for women and men as well as the Sunday finest for church services. His tribal costumes and make-up for the “African Homeland” number were striking.

The transformation from Celie and Nettie’s younger years to the mature look later in life is wonderfully realistic in terms of wardrobe and how those pesky gray hairs took over.

Lynn Johnson’s lighting design depicts a rather dim set for the most part that symbolizes the events occurring in a once-upon-a-time era.  It is quite effective.

Like so many Broadway hit musicals (e.g. The Sound of Music, West Side Story, South Pacific, etc.) that dealt with serious social and political issues as the backdrop to an entertaining production, The Color Purple is in that company and is highly recommended.

Running Time: Two hours and 35 minutes with one intermission.

Advisory: This show contains adult subject matter and is not appropriate for children.