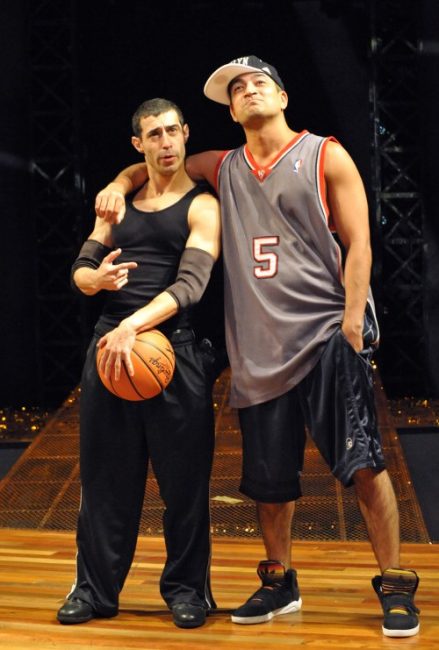 The theme of Woolly Mammoth’s 2012 – 13 season couldn’t be more bold: “My Roots, My Revolution” – a proud proclamation of America’s diverse ethnic tapestry and of each person’s individual need to express and fulfill his or her individual cultural identity.  Their season’s first show, The Elaborate Entrance of CHAD DEITY by Kristoffer Diaz and its tale of Mace, a Puerto Rican pro wrestler struggling to fulfill his life’s destiny, couldn’t fulfill that thematic pledge more fully.  When the roots of Mace’s frustrations become clear, he launches his own personal narrative revolution.  Such a hope can’t but be yearned for by all theatre-goers.  Unfortunately, however — being the old-schooler that I am — no matter how much I loved the play’s thematic revelry and many of its motifs, the evening’s narrative and the production’s presentation of that narrative left me hoping for more.

This production of The Elaborate Entrance of CHAD DEITY has everything that a theatre-goer might want.  Even if the world of professional wrestling is not your cup of tea — or should I say “can of beer” — or as the girlfriend of the Mace’s best friend, VP, tells us: “Can’t we watch something more real” — you’ll find yourself engaged by this 4th wall busting production.  For Diaz cracks open that world of mythic gladiators and melodramatic plotlines — if ever so slightly (and, for this viewer, not nearly wide enough) — to reveal a glimpse of the humanity festering beneath it. 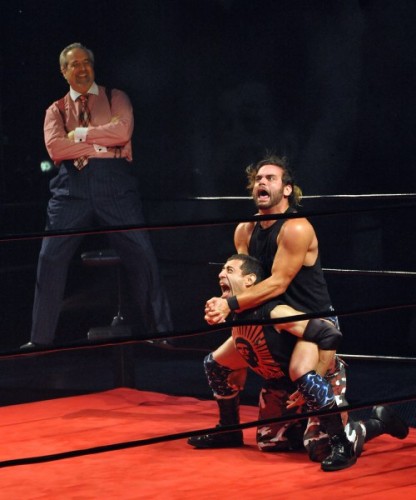 Mixing monologue — a lot of monologue — with live and recorded video — fantastically huge video faces with glaring eyes — with masked flamboyant wrestling characters — funny comment-on-my-character characters — CHAD DEITY takes its audience into the heart of anyone who has felt like the iconography of American culture seems for someone else.  When the show works, we identify with that sense that the majority of American popular culture is alienating; at best, having nothing to do with our lives or the lives of the people we know; at worst, exploiting our fears and stereotypes for economic and political gain.  In this sense the play and its thematic structure couldn’t be more appropo to Fall 2012, as our TVs are inundated with exploitive and dehumanizing political advertisements equally melodramatic in tone.

The show gives us Macedonio Guerra (Mace) –performed by José Joaquin Pérez–a man who is truly in love with the art of professional wrestling.  He wants to tell us his story, a story about how he must endure a profession that, as it turns increasingly toward profit and popular appeal, is losing touch with its aesthetic roots.  Mr. Pérez does an admirable job capturing Mace’s yoman-like commitment to his craft as well as his search for biography, an almost stuttering search for an authentic self within a world swallowed whole by the machinery of commerce.  The long monologues that Diaz gives the character in the first act would present a unique challenge to any actor, and Pérez reaches to find enough levels in the lengthy descriptive passages and enough angst to fill those isolated moments of personal revelation.

Chad Deity, portrayed by Shawn T. Andrew, is Mace’s antagonist.  Chad is all pizazz and muscly brawn, and Mace has spent most of his professional career building up his all American celebrity.  For it is Mace’s art, the art of stage-combat and “heavy lifting,” that has so successfully cloaked the relatively skill-less Chad in the aura of invincibility.  Mr. Andrew plays Chad with simple comic effectiveness, taking full advantage of his larger than life cartoon-self, but also giving full life to those rare moments when the real “Darnell” steps to the fore.

…CHAD DEITY has everything that a theatre-goer might want.

Mace’s personal journey begins when he introduces his professional world, THE Wrestle, to his unemployed basketball playing friend, Vigneshwar Paduar (VP), played by Adi Hanash.  In their wild fantasy, the India-born VP, who doesn’t know anything about the world of professional wrestling, will get a job as a wrestler portraying his native India, a rising competitor to American capitalism, using his own unique brand of hip-hop flash.  If this dream sounds a bit far-fetched, it’s supposed to be, as the whole script has a tongue-in-cheek, “I know this script is as ludicrous as the scripts used in professional wrestling” style.  When THE Wrestle’s owner E.K.O. — played with delightful impresario fun by Michael Russotto — gives VP the wrestling job, Chad Deity roars full throttle, for now we have the problem of the tale.  E.K.O will not make VP a hip-hopping Indian on the rise but The Fundamentalist, an Islamic terrorist who, with his manager, Che Chavez Castro (Mace), is bent on destroying America — I mean, Chad Deity.

VP is the play’s most intriguing character, probably because he is a true outsider to this world of wrestlemania.  Mr. Hanash plays VP with an authentic hip-hopper’s naivete — not that there really might be such a person, but again one needs to remember that this script is not rooted in the reality of the street but in the reality of how we construct narratives.  Mr. Diaz has constructed his story around an idea: the world of wrestling, like the world of theatre, is 99 percent hoax and only 1 percent authentic.  If you love wrestling, like if you love theatre, you had better love the hoax because the authentic just won’t sell the tickets.  In fact, even in a play that is about a revolutionarily authentic moment in the theatrical — I mean wrestling world, the producers had better not put that authenticity on the stage for fear of losing the audience. 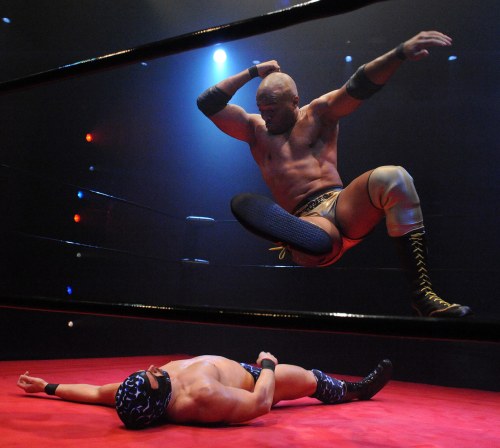 Thankfully, the play’s second act is tighter than the first, with fewer overlong monologues and crisper dialogue.  The action also increases as The Fundamentalist begins his journey to fame and fortune, encountering such old time heroes as Billy Heartland and Old Glory, using his infamous “Sleeper Cell” — you’ll never guess what that is.  Both of these solidly American icons were performed with great aplomb by James Long, who even overcame a ridiculous pregnant-looking pair of Old Glory tights.

To be sure, The Elaborate Entrance of CHAD DEITY is a show worth seeing.  It is not only theatrically unique but also a necessary critique of American popular culture. Does it have its flaws?  To be sure, but only if, like me, you keep clinging to some desire for a dramatic story to be rooted in reality.  On the other hand — to paraphrase and rift on remarks made by Samuel Coleridge almost two centuries ago — if you have an unlimited willingness to suspend disbelief, then imagining what is absent from this tale becomes possible, if only for a moment.  Even now, I find myself wanting to suspend my disbelief so as to make this tale possible, to make it whole, to make it true even to itself; but in the end, in the fierce contest between the individual’s out-of-the-mainstream narrative and the forces of global commodification and power, the little guy doesn’t stand a chance.  If he wants to live, he has to make a choice.  In lieu of that lack of choice, I’m left wanting that little guy with his simple love for a simple art that I never got a chance to see.

Running Time: 2 hours and 10 minutes with an intermission.