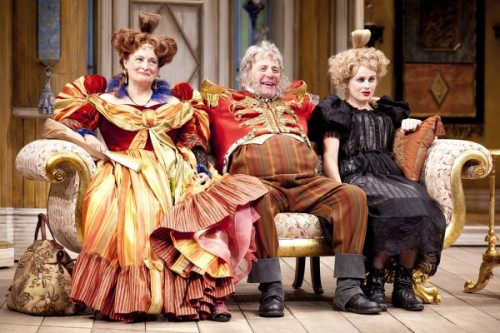 Nancy Robinette as Anna, Rick Foucheux as the Mayor and Claire Brownell as Marya. Photo by Scott Suchman.

Oh those corrupt small towns in distant Russia, inhabited by country bumpkin politicians and ignorant bureaucrats!  Those Mayors with their greedy hands in every till!  Those Judges with their big fat feet in every mouth! Those Postmasters with their prying eyes reading every romance!  Those School Administrators with their petty minds on every football field!  Shakespeare Theatre Company’s production of Nikolai Gogol’s famous comedy The Government Inspector couldn’t be more apropos to the current political climate—except for one oh so important detail.

Gogol was no fool.  It is always easier to laugh at the other guy, and that was particularly true in Tsarist Russia in 1836 when he wrote the play.  His audience would have scoffed: “We in St. Petersburg aren’t the corrupt officials who require millions in bribes to get things done, or who spend millions more doing things incorrectly.  It’s those guys in the provinces, those small towns in the middle of Perm or Yamalia or any Red State.  They are the bad guys.  We in the center of federal power keep those distant institutions in check.” 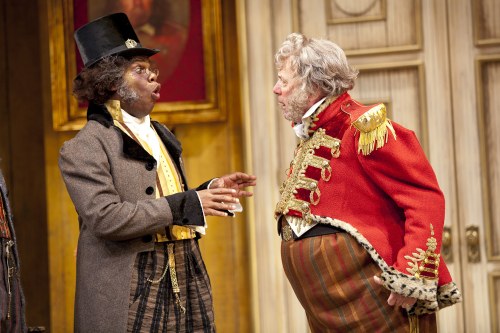 Craig Wallace as the School Principal and Rick Foucheux as the Mayor. Photo by Scott Suchman.

And laugh we did.  With its cast of very familiar Washington faces—Rick Foucheux as the Mayor, Anton Antonovich, Nancy Robinette as his wife, Anna Andreyevna, Lawrence Redmond as the Hospital Director, Floyd King as the Postmaster, and Sarah Marshall as….I’ll get to her in a minute—Gogol’s The Inspector General is a delightfully pleasant evening at the theatre spent chortling at those other guys, and oh what a host of other guys those other guys turn out to be.

The story is relatively simple.  The corrupt political establishment in a small Russian town years from St. Petersburg learns that the Tsar has secretly sent an emissary to check up on them.  A sophisticated stranger has been staying at the local inn for a week; they assume that he is the emissary.  They will do everything economically possible to stop him from reporting negatively on their activities—he who lives by the bribe will die by the bribe so to speak.  The only problem is: the stranger, though from St. Petersburg, is not the emissary, but a recently fired bankrupt government clerk on his final leg.

What follows is a fast-paced comedy of outrageous proportions.

Costume designer Murell Horton costumes performed marvelously, creating an epic visual display of color and pattern, that her actors successfully animated at every turn.  Joining Foucheux, Robinette, Redmond, and King as members of the small town inner circle were Tom Story as the Doctor, David Sabin as the Judge, Craig Wallace as the School Principle, and Harry A. Winter and Hugh Nees as Dobchinsky and Bobchinsky, or as Ms. Horton must have called them Tweedledee and Tweedledum.  This farcical ensemble at the center of the play could not have looked or sounded more ridiculous in their single-mindedness.

…a fast-paced comedy of outrageous proportions.

Derek Smith plays Ivan Alexandreyevich Hlestakov, the spoiled recently-fired, low-level government clerk who is down on his executive functioning skills but soon to be very up on his luck.  Smith plays him with incredible dexterity and humor.  Whether on the verge of suicide or on an all-out rage against the idiocy of humanity, this Ivan maintains his likeability.  Thus, the audience roots for him despite his-less-than-virtuous actions. 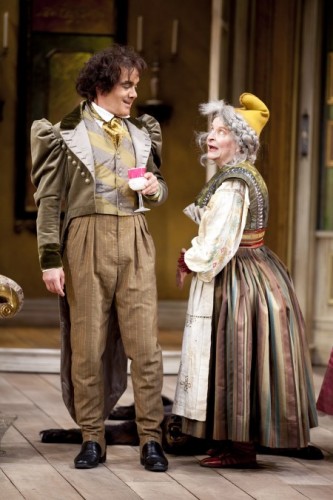 Derek Smith as Hlestakov and Sarah Marshall as Grusha. Photo by Scott Suchman.

Aside from Smith’s authentic Ivan, the peripheral characters in this highly political farce stole the show.  Liam Osip, playing Ivan’s not-so-loyal servant, delivers such a simple, direct, man of commonsense than one can’t help but adore him.  Claire Brownell as the Mayor’s daughter, Marya, was such an astoundingly contemporary American teenager in this play of strange small town Russian public servants that, even as she sat stone-faced on the sofa in the sea of buffoons that engulfed her, she drew and afixed one’s gaze.  And, finally, the previously mentioned, ever imaginative, ever inventive Sarah Marshall, as the Corporal’s Widow, the Innkeeper’s Wife, and the servant Grusha was so in the moment, so surprisingly refreshing with each character and each cross of the stage that one couldn’t help but hope she would once again peek from behind some curtain or from under a table to delight us with yet another comedic poke in the eye.

Finally, Michael Kahn’s expert direction kept Jeffery Hatcher’s modernized adaptation of Gogol’s original moving at a brisk pace.  Plus, I am happy to say, that on Press Night, when the show’s rented turntable refused to turn, making it an unturnable table, the decisions was made—to paraphrase Michael Kahn’s own words—to let the Serfs do the impossible!  The crew turned the table by stick and jab, and to thunderous applause, saved the theatrical day.

In these times of constant bicker and blabber between this pundit and that official, this operative and that mouthpiece, we keep begging for the chattering class to stop pointing the finger at the other guy and fix the problems.  Meanwhile, the finger we just pointed has poked our neighbor in his ear and caused a ruckus.  This Government Inspector will not change the culture of Washington, DC, or even your own office but it will definitely make you feel better when you point your finger at the guy across the cubicle.