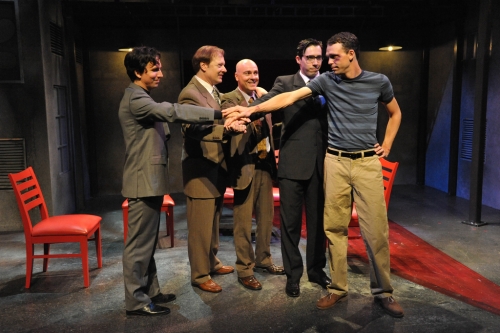 To many of the younger generation, the quest for equality for the lesbian, gay, bisexual and transgender population has only centered on same-sex marriage.   Others perhaps are aware of the Stonewall uprisings in New York’s West Village in June 1969 that most concur launched the modern gay rights movement.  In actuality, the movement began quietly and covertly in the early part of the 20th century and started to find its legs in the 1950’s.

The first gay activist (homophile) organization in the U.S. was called the Mattachine Society, which was founded by Harry Hay in Los Angeles.

The Temperamentals by Jon Marans opens the 20th anniversary season of Rep Stage—the professional Equity theatre in residence at Howard Community College.  In a compelling and humorous way the play chronicles the Mattachine Society’s founding and early stages as well as the developing romance between Hay (played by Nigel Reed) and well-known fashion designer Rudi Gernreich (Alexander Strain).

Originally The Temperamentals had an off-Broadway run until May 30, 2010 after just over a year and won the Drama Desk Award for Best Ensemble Cast.

The title The Temperamentals was drawn from a slang word for homosexual—temperamental—that was part of the lexicon of the era.  Gay folks had to use code words at the time to communicate with other gays lest they be overheard by others that often lead to dreadful consequences.

Rep Stage’s production of The Temperamentals is fascinating at its core. Set in various locations in Los Angeles in the 1950’s the story focuses on Harry Hay, a gruff, determined, social radical who happens to be a “temperamental” and a Communist.  His passion to achieve equality is so strong that he initially frightened off many of his friends and associates who found safe harbor in the closet.  But he managed to win them over, one at a time.

The effort to create the underground Mattachine Society was a profound struggle because of the risks and sacrifices members had to make.  It needed to be formed under secrecy and using covert communication.

An unexpected court victory on a solicitation charge against one of its founding fathers failed to garner any notice in the press.  But the surprise win strengthened the resolve of the members to carry on despite the overwhelming prejudice against homosexuality throughout society.  Even the Communist Party eventually ousted Hay for being homosexual.

Marans’ play is not just a political documentary.  It is also a love story—told tenderly with wry humor mixed in—about the relationship between the crusty Harry Hay and the charming Austrian Jewish designer Rudi Gernreich.  They were completely asymmetric personalities but shared a passion for their cause and for each other.

The superb cast that also included Vaughn Irving, Rick Hammerly and Brandon McCoy under the direction of Helen Hayes Award winner Kasi Campbell gives more power to the already powerful script.  Except for Nigel Reed as Hay, the remainder of the ensemble played multiple characters, and they pulled it off expertly.

The Helen Hayes Award-winning Reed portraying Harry Hay is a standout and perfect for the central character in so many ways.  His acting skills shine throughout—showcasing a resonant voice, impeccable timing and stage movement.  When called upon to sing at times, his vocals were spot on.

Helen Hayes Award nominee Alexander Strain is also magnificent as Rudi.  The complex role affords Strain to blend drama with humor and does so magnificently.  The chemistry between Rudi and Hay is solid, thanks to the skilled acting and direction.

Rick Hammerly as Bob Hull, a Mattachine founding father, demonstrated why he is also a Helen Hayes Award winner. His character is the most “temperamental,” and well-timed and delivered humor is a major component of his performance.

JD Madsen’s set is simple and effective.  The main stage is the venue for most of the action but a catwalk over the stage and a staircase were also employed effectively. Prior to the start of the play, a nifty 1950’s TV console with black and white footage of shows and commercials of the era made clear to the audience that the play is set in the 1950’s.  Once the play started, the TV while on the stage throughout, never was used again as the cabinet doors remained closed.

Scene changes (and there are perhaps too many in Act I giving the performance a choppy flow) are handled mainly through the use of lighting effects (Dan Covey) and the various positioning of five red chairs on the stage by the actors.  If I have a quibble with the production, it would be that the locations of the new scenes are not clearly identified in some cases.

Covey’s lighting is clever throughout as he employs shadows and dimness as a metaphor for the way homosexuals had to live their lives in the 1950’s.

Denise Umland’s costumes are dominated by the five main characters’ donning suits and ties most of the time.  This is a statement on how the “temperamentals” try to blend in with straight men.  The exception: Harry Hay eschewed conformity and assimilation; he chose to wear colorful shawls over his suits to make a political statement.

When the other members of the cast have to play women, instead of dresses or similar garb, they simply put on women’s hats while wearing clothing for men.

The Temperamentals is a fascinating depiction on how life was like for gay people over a half century ago and how brave men who risked so much sought to right the wrongs.  An engaging romantic parallel story offers additional humanity to this well-written, well-directed, expertly performed play.

Advisory:  This show contains some profanity, mild sexual content and adult subject matter and is not appropriate for children.

The Temperamentals plays through September 16, 2012 at the Studio Theatre at the Horowitz Center, Howard Community College, 10901 Little Patuxent Parkway, Columbia, MD 21044. For tickets, call the box office at 443-518-1500 or purchase them online.