“You’ll be engaged from beginning to end and leave the theatre dreaming about the death of an era.” -Robert Michael Oliver, MD Theatre Guide

Synopsis: Academy Award and Tony Award nominee, Kathleen Turner, brings her sizzling blend of sensuality and intelligence to the bravado of newspaper columnist Molly Ivins. A dyed-in-the-wool liberal from deep in the heart of Texas, Ivins’ rapier wit made her one of America’s highest-regarded columnists, satirists and beloved rabble-rousers. 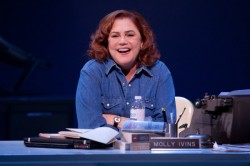 Everyman has begun their inaugural season on Fayette Street! The 2012/13 Season has six spectacular plays, all famous for their brilliance, and all Baltimore premieres!

Synopsis: Sarah and James – a photographer and a journalist – share a passion for the adrenaline rush caused from reporting in the world’s deadliest war zones. As reporters, their lives are devoted to telling the toughest stories from across the globe. But how do you separate yourself from the action you witness? How do you create an impartial lens? When their own story takes a sudden turn during a bomb blast in Iraq, the wounded Sarah returns home with James to the safety of New York. Pressed to consider settling into a more “conventional” life, Sarah must face her addiction to the drama and chaos of war. 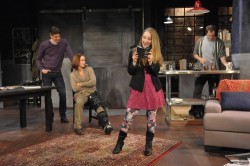 3. The Best Little Whorehouse in Texas at Signature Theatre

Grab your partner because this show will have you two-steppin’ and boot-scootin’ in the aisles with a score that includes, “Twenty Fans,” “Girl, You’re a Woman,” “Twenty-Four Hours of Lovin,’” and “Hard Candy Christmas,” along with the new musical number “A Friend to Me.”

Synopsis: Miss Mona’s Chicken Ranch brothel comes to life in this rollicking new production of the award-winning musical. When crusading television watchdog Melvin P. Thorpe ogles the whorehouse as his next moral target, Miss Mona, her bevy of working girls and Sherriff Ed Earl Dodd must buck the muckraker to keep the ranch open. A gritty satire about moral hypocrisy and media sensationalism, this musical is the perfect election-year event! 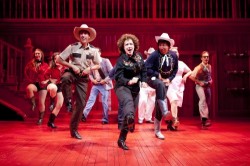 Sherri L. Edelen as Miss Mona leads the cast in the finale. Photo by Scott Suchman.

4. The Temperamentals at Rep Stage

Synopsis: “Temperamental” was code for “homosexual” in the early 1950’s, part of a created language for secret words that gay man used to communicate. Winner of a Drama Desk Award in 2010, “The Temperamentals” tells the story of two men – the communist Harry Hay and the Viennese refugee and designer Rudi Gernreich – as they fall in love building the first gay rights organization in the pre-Stonewall United States.

Synopsis: The District’s own Batman of the Beltway was just the tip of the iceberg.  Welcome to the world of real life superheroes (aka “Reals”) who don disguises and fight crime. 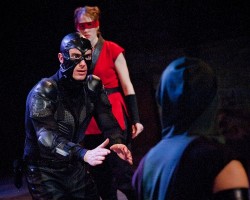