World Premiere of ‘Shape’ this week at Atlas 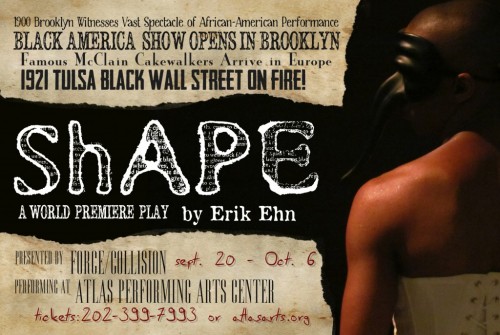 Following up on my news article on world premieres in the Washington area this Fall, I came across a promotional video for Erik Ehn’s Shape, being presented by force / collision at the Atlas Performing Arts Center this week. The show is one of 17 performance pieces, which constitute the piece Soulographie, that will open this November 10 – 18 at La mama ETC in New York City. Shape explores the intersection between several events, each of which focuses our attention upon the struggle of African Americans to establish and maintain a cultural identity within the United States.

The performance piece, which combines poetic images, dance, and theatrical spectacle, begins in 1895 with a historical event entitled “Black America.” Taking place in South Brooklyn, New York, 500 African American performers—vaudevillians, dancers, singers—recreated a southern cotton plantation, complete with cotton fields and slave quarters. The stars of the show were two of vaudeville’s top performers, Billy and Cordelia McClain. Mr. McClain, a former New York lawyer who took his stage name from his former tutor, was the leader of the chorus while his wife, one of the show’s prima donnas, was famous for her buck dancing and cake walking.

…a unique opportunity for DC theatre-goers. 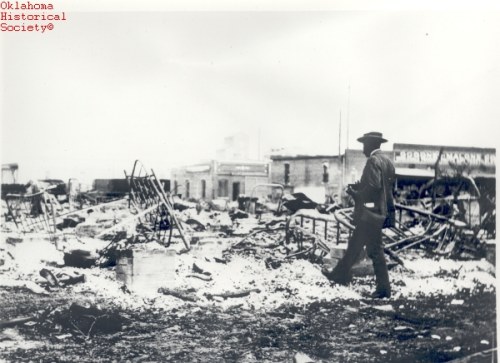 Another historical event, crucial to Shape, is the Tulsa Race Riot of 1921. One of the worst incidents of racial violence in American history, over the course of 18 hours white Oklahomans destroyed an African American community, burning down over a thousand homes and businesses and killing hundreds. To quell the violence, the city was placed under martial law.

Shape uses these two events and others to explore the collision of culture and race that has helped define America for more that two centuries. Erik Ehn is world renown for his work with the alternative theatre movement and this premiere is a unique opportunity for DC theatre-goers.