‘A Quick 5’ with Mary Bridget Davies 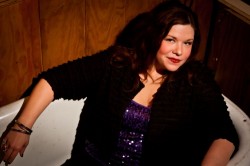 Mary Bridget Davies is currently performing in One Night with Janis Joplin at Arena Stage. Mary Bridget has a long association with Joplin having portrayed her in the national tour of Love, Janis and was nominated for the Austin Circle of Theaters’ B. Iden Payne Award as well as being voted “Best Moment in Theater” by Kansas City’s The Pitch newspaper for her portrayal. Other credits include It Ain’t Nothin’ but the Blues on Broadway and being a member of Something Dada Improvisational Comedy Troupe. Davies has received numerous awards for her voice and band, most recently winning second place at International Blues Challenge 2011. She tours internationally with Joplin’s original band, Big Brother & the Holding Company.

Had you been familiar with Janis Joplin’s music before portraying her on stage?

Absolutely. My parents played her records, along with many other amazing artists from that period in music, all the time. I have been a fan of hers ever since.

You played in Love, Janis which is another play about Janis Joplin. What are some of the differences between that show and One Night with Janis Joplin?

Two actresses played Janis in Love, Janis. One played her inner-self and the other portrayed her outer stage persona and did all of the singing. In One Night with Janis Joplin, I play Janis and Sabrina Elayne Carten plays the role of the Blues Singer, a revolving role encapsulating many of Janis’s musical influences like Bessie Smith, Odetta, Nina Simone and Aretha Franklin. One Night with Janis Joplin has 23 musical numbers! It definitely weighs in as more of a live concert than a straight piece of theater. 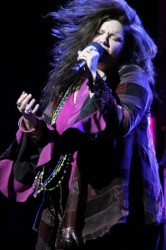 You perform with Janis’ original band Big Brother and The Holding Company. How did the band find out about you?

I blindly emailed Sam Andrew, guitarist and vocalist for Big Brother & the Holding Co., when I first started singing around 2002. I told him I was a fan and that I was coming to their gig nearby that weekend. He responded within a day and said he was looking forward to meeting me. Once I arrived we chatted for a while and he asked if I would like to sit in. I was thrilled!!! I sang “Me and Bobby McGee” and we’ve been friends ever since.

Why do you feel Janis’ music continues to thrill audiences after so many years?

Most modern music lacks the sense of urgency, depth of message and unbridled freedom that was Janis’ music. Her music hits you like a freight train and can evoke so much inside of you. That’s what we all want at the end of the day. To be moved, to feel something and she never fails to deliver.

After One Night with Janis Joplin closes, where can we see you next?

Like Janis, I am a full time musician, so when I am not acting I am on the road supporting my new album Wanna Feel Somethin’.