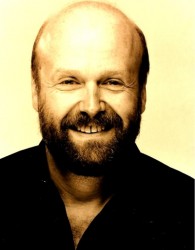 Paul Ford is the quintessential Broadway rehearsal pianist. When a show is in the rehearsal stage the musical director can not be in multiple places at once so sometimes one or more rehearsal pianists are used. Paul Ford has been in on the creations of Sunday in The Park With George, Assassins, Passion and Into The Woods working alongside Stephen Sondheim and conductor Paul Gemignani. On all of those shows Paul ended up in the orchestra for the production and can be heard on the original cast recordings as well. A few other credits include Pacific Overtures, Upstairs at O’Neals, Gypsy with Patti Lupone at Ravinia, Inside The Actor’s Studio playing for Liz Callaway and Jim Walton and for many years, Mandy Patinkin’s accompanist. If you see Mandy in concert chances are you will see Paul at the piano. He can be heard on numerous recordings as well. A rehearsal pianist is one of those jobs that most don’t know exist. The fact that Paul Ford has been doing it for so long is a testament to his talent as a musician.

Where did you get your musical training?

I went to Georgia State University in Atlanta, Ga. for 5 years, never graduating. But I started listening to ‘show’ music at age 5, piano lessons at 10, working on musicals at 15, becoming a staff member for the Northside School of Performing Arts from age 17 to 22. I went to see everything locally, and made multiple trips to New York during the 70’s with the school to see as many shows as possible. Basically I learned ‘on the job.’

What was the first Broadway show you worked on?

I was second rehearsal pianist during Broadway previews of Richard Rodgers last musical I Remember Mama. I got to meet ‘the man,’ play one rehearsal for choreographer Danny Daniels, sit through a sitzprobe of a new dance orchestration conducted by Jay Blackton, and chat with Liv Ullman. I collected 3 weeks paychecks, worked for 20 minutes, and went to opening night sitting on the last row of the balcony next to Bob Gunton’s wife, Annie McGreevey.

You have a long association with Stephen Sondheim and Conductor Paul Gemignani. What do you enjoy the most about working with them?

The completely relaxed ‘let’s put on a show in a barn’ atmosphere created by the two of them especially on the 4 shows, Sunday, Into the Woods, Assassins, and Passion. Being a non-college graduate, I was made to feel trusted in my abilities and able to let go of any insecurity. I mean really-what was a hick from Georgia doing in a room with those people! Boy, was I one lucky so-and-so!

You always play in the pit of a show, or accompany a singer, or are the rehearsal pianist on a production. Is there a reason why you have never conducted a Broadway musical or is it by choice?

Definitely choice. I was never interested in conducting. I auditioned as assistant conductor for the 3rd National Tour of Annie in 1979 (I needed work), never having held a baton in my hand, and got the job. I conducted the show a total of 2 weeks out of that year, and returned the baton to Patelson’s Music Store in 1980! (Joking.) But I hung it up then. It’s interesting what making firm decisions can do to a person’s path. For 25 years I’ve had the pleasure of walking onstage and solo accompanying Mandy Patinkin. Probably wouldn’t have happened if I been distracted by conducting.

Of all of the productions you have worked on what are some of your favorites?

First and foremost, Sunday in the Park With George.  The best year of my life-everything was in its place, life was beautiful, and I was living a dream. Both Assassins productions, the original and the 2004 revival were such parties it’s a miracle we actually got the shows rehearsed and on stage. Mario Cantone and I particularly had a good time during the tech rehearsals of the revival, entertaining everyone with his impersonations-one of the best weeks of my life. (Now everybody breaks away and ‘texts’ their brains out when we should be rallying around the piano and having a good time-sad.) Tom Sawyer was a great cast, multi-generational, (remember when shows had old people in them) and we basically had to build something out of nothing.  Annie was wonderful, Steel Pier was a good experience, and both times doing Anyone Can Whistle has turned that show into one of my top 5 favorites-something about that score. Playing performances for Mandy is really where I live. And last but not least, playing rehearsals for the 1987 Follies Concert, and the 3 wondrous nights at Ravinia doing Gypsy with Patti LuPone were unforgettable experiences. Great shows, great people-just being part of the last gasp of the 20th century on Broadway.