Concert Review: ‘Patti LuPone: Matters of the Heart’ at The Strathmore Music Center 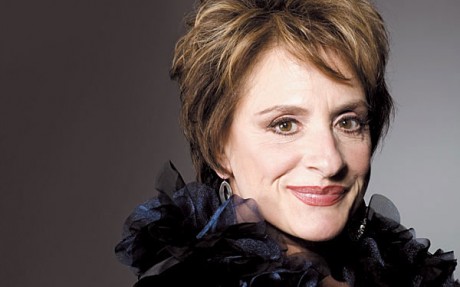 Let me set the scene: A turquoise blue backlight stretches across an elegant stage set with a grand piano and a bouquet of white flowers, in an expansive and acoustically perfect hall that may induce vertigo.  Broadway legend Patti LuPone, accompanied on the piano by musical director Chris Fenwick and The Four Play String Quartet, will soon make her entrance at The Strathmore Music Center, Montgomery County’s quintessentially professional venue.  After being directed a minimum of three times by three different, but equally eager ushers, I settled into my seat in the orchestra section.  Sitting within the sea of older couples and younger diehard Broadway fans, all in their best evening attire, I thought I was in for a pleasant, polished evening of proper music.  I was not prepared, however, for the unabashed, sardonic wit and wonderfully resonant tones of Miss Patti LuPone.  I was delightfully surprised.

Miss LuPone took the stage with the ease of a true blue showbiz professional.  The theme of the night was “Love,” and she rattled off the many forms of love: young love, painful love … LUST … motherly love, consuming love … LUST, cracking up the audience and winning our hearts within the first four minutes.  Miss LuPone’s instant relatability gave even the non-Broadway aficionados a feeling of familiarity.  She’s the warm, funny, sarcastic, never-scared-to-keep-it-real aunt I never had.

LuPone’s performance did something wonderfully refreshing.  She admitted that romance, in all its forms, still exists.

And then there is the sheer gripping quality of her voice. Deep and commanding, her performance of “Not a Day Goes By” in the first act gave me  goosebumps even before I comprehended the lyrics. Accompanied beautifully by pianist Chris Fenwich and The Four Play String Quartet, LuPone’s distinctive arrangements showcased her extraordinary range and lush vocal stylings.  The assortment of musical classics, from “Being Alive”  to “Easy To Be Hard”  and “I Never Do Anything Twice” to her encore of “Just the Way You Looked Tonight” were all met with rousing cheers from the audience.

LuPone is not just a powerful singer, but also an unabashed and engaging actress: stepping easily into character and bringing the audience along with her.  One was never at a loss for how to feel during the show.  If you are someone who enjoys your run-of-the-mill rock concert, where one rarely experiences such emotional certainty, this music is not for you.

There is something to be said about the lyrics of musical theater; they jump right to the point.  There are no indie-rock style metaphors here.  The production Patti LuPone: Matters of the Heart dives head first into the full spectrum of romance, embracing the theme in a way that is often avoided in the jaded hipster music scene of my generation.  And no, I don’t just mean the overly dramatic, waiting-for-your-knight-in-shining-armor songs of romance.  I’m talking about the gritty, desperate, humiliating kind of romance.  You know, the kind where you’re up until 3 am on a Wednesday waxing your entire body so that the hot Barista from Starbucks will smile at you in the morning. LuPone’s set sang to how far love can push us: whether it was the horror of discovering that the man you’re dating has some serious fetishes in “Shattered Illusions,” the suicidal bitterness felt after a break-up in “Better Off Dead,” or the wistful mourning in “Back To Before.”  In a modern media where love is detached and irony reigns, LuPone’s performance did something wonderfully refreshing.  She admitted that romance, in all its forms, still exists.

Patti LuPone: Matters of the Heart  is not being performed again this season at The Strathmore Music Center, 5301 Tuckerman Lane, in North Bethesda, MD.  For information about other events click here.