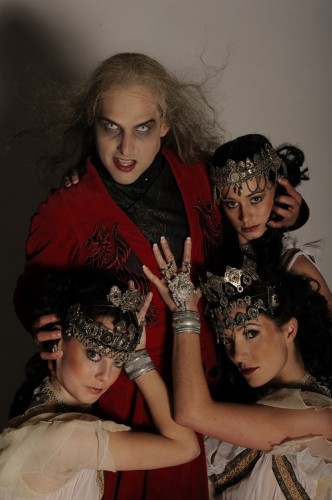 If curling up on the couch with your favorite horror flick is your idea of an unbeatable way to celebrate Halloween, I have news for you:  it’s time to reconsider.  Michael Pink’s Dracula, performed by The Washington Ballet at the Kennedy Center with music composed by Philip Feeney, will leave you feeling spooked and dying (almost literally) for more.  This is one show you should not miss.

This performance embodies everything you could ever imagine upon hearing the words “dracula ballet.”  The audience enjoys large helpings of top quality choreography, grade-A visual effects, and home-grown sexual themes—not to mention a fair share of blood, tutus, and suspenseful classical music.  Originally premiering in 1996, this dance adaptation of Bram Stoker’s classic novel is broken into three acts, each focusing on a different victim of Count Dracula (danced by Jared Nelson), and the unique and twisted fate that each suffers.  In the first act it is Jonathan Harker (danced by Jonathan Jordan), whose recurring dreams of his initial visit to Transylvania haunt him.   In the second we meet Lucy (danced by Nicole Haskin), the flirtatious-turned-blood-sucking friend of Harker’s wife Mina, who is effortlessly seduced by Dracula.  The third act stars Harker’s wife Mina herself (danced by Emily Ellis), whose relationship with the Count progresses to even darker levels.

This is one show you should not miss.

The set design and use of special effects during the show played an important role in the ballet’s overall captivating effect.  I was especially impressed during the first act, where the transitions between dreaming and reality were seamless, keeping me on the edge of my seat, and not allowing me once to lose my grip on the story.  From the fog that floated across the stage during many scenes, to the well designed castle formation upstage, to the smoke bomb that startled the audience in the third act, that the lighting designer, Paul Pyant, the production designer, Lez Brotherson, and the technical team at the Kennedy Center did not miss a beat. 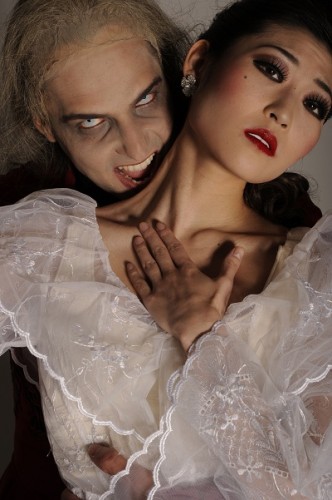 Feeney’s musical composition was harmoniously married to Pink’s choreography, so much so that during the first act I almost forgot that there was no exchange of dialog during ballet.  Other than the opening of the second act, whose disorientingly cheerful mood lasted a tad bit longer than desirable, all aspects of the performance fit well together.

Excellent execution of the choreography was of course supported by very strong performances by all the dancers, especially those in the roles of previously mentioned Lucy (Haskin), sanatorium patient Renfield (danced by Daniel Roberge), and of course Dracula himself (Nelson).  Haskin’s transformation from high society lady to blood-worshipper between the second and third acts showed real performative chops and I can’t help but give serious kudos to Roberge, who danced gracefully while in a straight-jacket in act three.

Jared Nelson’s performance as Dracula, however, was the icing on the cake.  His silent scene entrances made my stomach drop and his lizard-like, inhuman movements made my skin crawl.  Nelson did not dance Dracula’s part, he was Dracula. His commitment to the character reached undisputable levels during curtain calls, when he slowly and humorlessly paced on stage, not even the glimmer of a smirk on his white painted face.

It must be noted that the cast that I saw perform only has performances on October 28th @7:30pm, November 1st, November 3rd @7:30pm, and November 4th @1:30pm, which is not to say that the other cast for this show would be any less spectacular.