Theater Review: ‘The Color Purple’ by the Tantallon Community Players

The cast of ‘The Color Purple.’ Photo courtesy of Tantallon Community Players.

The worst part about the Tantallon Community Players’ The Color Purple is that readers won’t be able to actually see this production. But the best part is that readers will now have this Fort Washington, Md.-based troupe on their radar because the singing and dancing in this show was unlike anything that’s typical of community theater.

Closing its two-week run with three sold-out shows, the incredibly talented and widely varied 46-member cast, was chock full of singers and dancers of all ages. The booming voices of Celie (Andrea Gerald) and Shug Avery (Rikki Howie), as well as the three church ladies Jarene (Jesaira Glover), Darlene (Temple Fortson Lloyd-Roberts) and Doris (Kristen M. Lee) stood out among a cast and crew that seemed to be hand-picked for these roles. Celie especially commanded the audience with her voice and the fluidity with which she moved between scenes and interactions with other characters. On top of the singing, a number of members of the ensemble performed rousing and well-synchronized dances.

…kept the audience in stitches.

Exploring race, gender roles, and sexuality, the musical tackled all of the major themes of the Alice Walker novel while still managing to include 28 songs and a number of well-choreographed and enthusiastic dances that flowed into the story as easily as the wonderful live music echoing from behind the set. And although the play is set in the 1930s, the themes still ring true, especially scenes where Shug and Celie struggle to be understood as lovers, and similarly struggle to understand themselves. 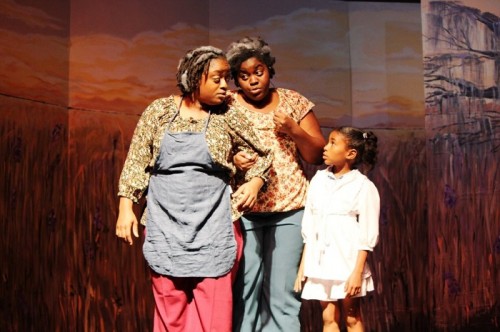 Andrea Gerald as Celie, Shanice Jones as Sophia, and Kimaria Samuels as the young lady. Photo courtesy of The Tantallon Community Players.

Mister (Demetrius Durrell) also perfectly captured the evil, conniving husband serving as Celie’s foil, while still delivering a cliché-proof performance and singing as well as any man on stage.  Witty asides by the church ladies and some of the women calling on Celie to leave her husband also kept the audience in stitches.

Director Charla Rowe infused the musical with a variety of songs and dialogue from all corners of the theater that kept viewers’ heads on a swivel, never knowing what to expect. Plus, despite some technical snafus with their microphones, the cast forged ahead, never missing a beat.

Next up for the Tantallon Community Players is A Christmas Carol, directed by Lauren Bloom, and running from Nov. 30-Dec. 9.