Theatre Review: Druid Theatre Company’s ‘Conversations of a Homecoming’ at the Kennedy Center 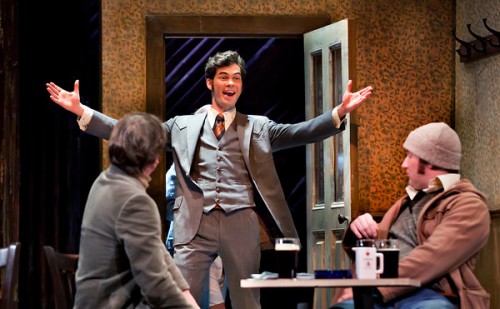 Garrett Lombard, Marty Rea and Rory Nolan from ‘Conversations of a Homecoming.’ Photo by Catherine Ashmore.

A history play, an honest small town play, an honest play about how most of us feel like failures, but are afraid to admit it until circumstances drive us to it. Tom Murphy’s Conversations on a Homecoming starts slowly but, after a few drinks and a few pleasant jabs, the angst, the fear, and the regret start flowing and this Homecoming leaves you ironically upbeat even if knocked about the head and in the belly a few times.

The first of a three part trilogy entitled DruidMurphy, Conversations of a Homecoming is not the high sensation drama to which Washingtonians have grown accustomed over the last few seasons. It is much more a bit of truth in advertising. As its title explicitly indicates, this long one-act drama is a talkfest, chock full of speeches and songs as diverse as the seven characters that drink and pine and drink and jab at one another until the bitter end. 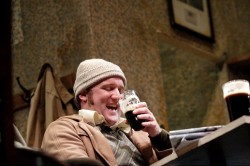 Written in 1985 Homecoming takes place in the 1970s in Country Galway, West Ireland, at “The White House” pub. Fittingly, a photograph of the late John F. Kennedy takes center stage above the bar. The White House, it seems, is where the rebellious idealistic Galway youth of the 1960s used to gather and dream. Now, ten years later, Michael (the one who left his small town to seek his way in the world of New York) has returned home to reconnect with those friends and hopefully to rekindle the enthusiasm for the future that they once shared. What follows is what one might expect in this searingly honest exploration of an increasingly hopeless condition.

What then makes the play so fascinating?  It’s simple: the characters that Tom Murphy has crafted, director Garry Hynes has orchestrated, and this brilliant seven-person ensemble has brought to their idiosyncratic lives. Murphy is a masterbuilder of character, finely chiseled dialogue that resembles a choir of unique voices, with each character’s idiom so specific, and so resonate, that I’m sure that if I went to Galway today I’d find myself a Tom, or a Liam, or a Peggy reminding me just how authentic those characters actually are.

Director Hynes has a gift for stage pictures, and though the show’s pace sagged during the show’s exposition, as soon as the characters had enough alcoholic fuel to fire their engines and ignite their true selves, they rivet the audience’s attention. As the play moves in and out of diatribes, a cappella songs, stuttering accusations, trips to the toilet, giggles, and the occasional belch our fascination with the intricacies of these small town characters only grows.

…leaves you ironically upbeat even if knocked about the head and in the belly a few times.

This ensemble did a remarkable job creating a dynamic tapestry of small town Irish life. Although Michael, played appealingly by Marty Rea, was the play’s protagonist, Garrett Lombard’s Tom drew much of the evening’s focus with his caustic, cynical speeches about everything from the impotency of politics and religion to the betrayal of friendship. Eileen Walsh delightfully plays Tom’s forever fiancée, Peggy. Her wide smile and shrieking voice and obvious pain makes the audience both laugh at and mourn for her woeful condition simultaneously. Not to be outdone, Aaron Monaghan gives us Liam, the drunk entrepreneur with a love for country music, which he delivers to friends and foe alike with key jiggling enthusiasm. Rounding out the cast are Beth Cooke as the ready for adventure Anne, Marie Mullen as the always happy pub owner Missus, and Rory Nolan as Junior, the laborer and father of three juniors, whose “drunk” I must say was the most impressive of the evening. 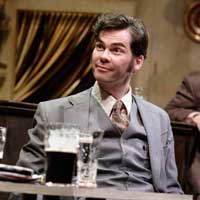 The scenography for Homecoming was well done, providing ample details to this portrait of small town life. A creative team that includes Francis O’Connor (Associate Director – Design), David Bolger (Associate Director – Movement), Joan O’Clery (Costumes), and Chris Davey (Lighting) enhanced each of the stage pictures Hynes so carefully crafted. And I must say the Johnny Carson style suit worn by Michael returning from New York was just the bit of period-setting detail that makes this show what it is.

Ironically, the true force of Conversations of a Homecoming will probably be lost on most American audiences. Although the play deals with the bitterness and pain that idealistic, artistic Irish youth felt during the 1970s over their failure to produce a cultural renaissance, today, in the 21st century, in their very Galway, the arts and theatre are experiencing that renaissance, with this production and the Druid Theatre Company as the evidence.

Part two and three of the Druid Theatre Company’s production of DruidMurphy, A Whistle in the Dark and Famine, play Thursday and Friday respectively, at the Kennedy Center off the waterfront in Washington, DC. All three plays will then be performed in sequence on Saturday, starting at 1:00.

Running Time: 1 hour and 50 minutes, with no intermission.