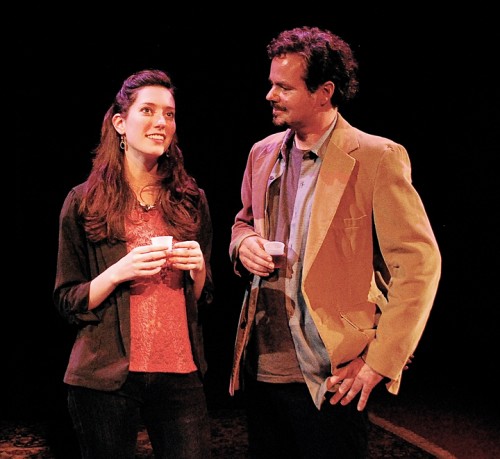 Rajiv Joseph’s All This Intimacy has all the makings of a door-slamming farce: Ty, a poet and professor, manages to impregnate three women in the span of one week, and has the brilliant idea to break the news of his infidelity by inviting all three women to the same dinner party. Joseph instead goes for lukewarm dramedy, and delivers a play that is more “How I Met Your Mother” than Moliere.

one part sitcom, one part slice-of-life drama, and completely unsettling.

The flaws of the play lie in the script, not with Arts Alive Theatre’s production. The direction is consistent and clear. The acting is high-energy and brings depth to an otherwise shallow story with a particularly infuriating protagonist. 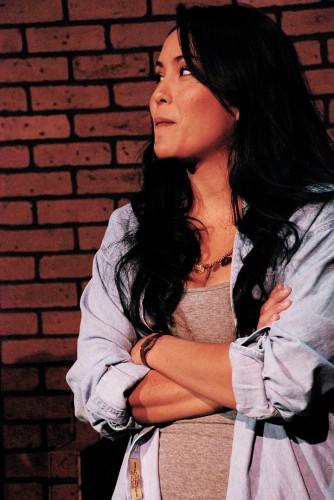 The non-linear plot progresses like a series of random video clips that Ty narrates like a DVD commentary track. Ty himself is the same kind of self-centered man-child found on sitcoms, and is never wholly relatable or sympathetic. He becomes successful without really trying. The university hands him a position as a college professor after his book of poetry, Labyrinth, garners critical acclaim. The women he becomes involved with jump right into his lap after he feeds them a few pseudo-poetic lines. He spends the first act making a mess, and the second act scrambling to clean it. The trouble is, he’s more concerned with absolving himself of guilt and responsibility than the interests of his children or their expectant mothers. He seems terrified of being alone, but doesn’t want to sacrifice anything of himself for companionship.

Sean Coe, who plays Ty, lends the character a mercurial charisma. You’re never quite sure if Ty is smart enough to play dumb, or just plain dumb. He plays Ty with a sort of sad-puppy appeal that is effectively pathetic, and for a few brief moments, almost endearing. Ty has an eerie everyman quality— you feel like you’ve met this guy before, and something about him rubbed you the wrong way.

The play is from Ty’s point of view, and his solipsistic vision of the world taints the characterization of the supporting ensemble. He idealizes some women, and dismisses the others as nags. His only male ally is his best friend, a goof pulled straight from prime time. The actors did an excellent job of mining for sincerity under the thick coat of caricature. Natalie Cutcher plays Ty’s girlfriend Jen, a lawyer/poet/geographer. Cutcher gives her too-colloquial dialogue real substance. Amy Miharu Hard plays Maureen, Ty’s 40-something disgruntled housewife neighbor, with frantic energy and justified desperation. 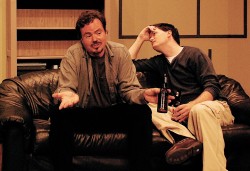 Emily Thompson plays Ty’s 18-year-old poetry student Becca, the sort of girl who is more likely to make Facebook posts about nights out with her “besties” than to spend any time writing poetry. Thompson makes her sarcastic and relatable. Brandon Mitchell plays Ty’s best friend Seth. In the first act, Seth rarely functions as more than comic relief, but he is a grounded voice of reason in the second act. Anna Jackson plays Franny, Jen’s sister/Seth’s fiancée/the only woman on the stage Ty hasn’t impregnated. Franny is a stereotypical nagging wife, but Jackson delivers her lines with so much vitriol that it’s hard not to cheer for her when she is the only person who has the guts to tell Ty exactly how screwed up he is.

Director Perry Schwartz times the humor well, but the script does little to capitalize on laughs. The moment something funny happens, the play veers off in a serious direction. Characters leave the room before the tension can explode. The moment of catharsis never comes.

The play builds up to a poignant ending, but ends in a final jolt that is too little, too late. Joseph doesn’t allow his protagonist to hit rock bottom. You’re left wondering if, after some poetic brooding, Ty will be back at his old tricks, having learned nothing.

The final verdict: All This Intimacy is one part sitcom, one part slice-of-life drama, and completely unsettling.