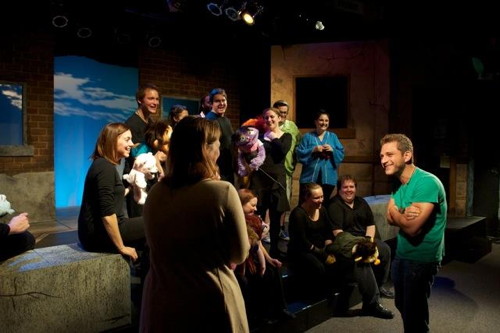 The songs, fun, imagination, themes, naughtiness and uniqueness that characterize Avenue Q  have been the source of the show’s popularity for years.  The three-time Tony Award winner, including Best Musical, ran for 2,534 performances on Broadway from 2003-2009 plus the spawning of other national and international tours and productions.   It has rightfully earned its place in musical theatre lore.

Originally conceived as a television series by Robert Lopez and Jeff Marx who wrote the music and lyrics before the show’s debut on Broadway (book by Jeff Whitty), Avenue Q is a coming-of-age parable that combines puppet theatre with real-life problems facing young adults.  Those issues and anxieties that young people must grapple with include finding an apartment, looking for a job, falling in love, avoiding commitment and most central to the show’s plot, seeking a purpose in life.  But these challenges, serious as they may be, are presented in a satirical and hilarious manner.

It is sheer joy with an uplifting message that is carried out by an award-winning director and talented cast and crew.

The use of puppets that distinguish the show is a rather unique device in musical theatre.  They combine the joy and brashness of those loveable characters seen in PBS’ Sesame Street—a program thrust into the current political debate—from which Avenue Q’s characters were inspired and parodied by Lopez and Marx with the latter having interned at the program earlier in his career.

The Red Branch Theatre Company’s presentation of Avenue Q at the Drama Learning Center in Columbia contributed to the show’s esteemed reputation.  “We wanted to bring our own interpretation to a very popular and well-known Broadway hit,” said Stephanie Williams, executive producer of Red Branch Theatre Company.   The group had the opportunity to rent replica versions of the puppets used in the Broadway production but instead chose to create their own version of the characters.  “These puppets have the same names and lines as the ones audiences may have seen in other productions but we think they come with a unique look and interpretation,” Williams adds.  The puppets were handcrafted by professional artisan Kaitlen Sousa from New England. 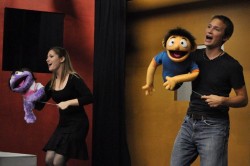 Jenny Male skillfully directed a wonderful young cast to act, sing, dance and puppeteer in the tight quarters of the Drama Learning Center stage using the available space and then some, including the audience itself.  She had the extra challenge of not only directing the actors but also the puppets and did so expertly.  Those actors who were also puppeteers deserve kudos for their fine work with their added responsibility.

Male’s body of work at Red Branch has been revered through her previous efforts particularly The Secret Garden, Urinetown, and Into the Woods, which earned the accolade of Best Revival of a Musical from BroadwayWorld.com: Baltimore. It is not surprising that Avenue Q triumphed and received an instantaneous standing ovation at show’s end.

One would think that with such song titles as “If You Were Gay,” “Everyone’s a Little Bit Racist,” and “Schadenfreude” the themes would be serious.  Well, they are, but are executed in a way that keeps you laughing as much as it keeps you thinking.

The show centers on Princeton (Zac Brightbill), a recent college graduate with a B.A. in English who winds up on Avenue Q in some far-out place in New York to find an affordable apartment.  He encounters a variety of oddball characters in the neighborhood who seem nice and have their own individual goals.  But in the end, they have one thing in common: to find their purpose.

Zac’s romantic interest is Kate Monster, played tenderly by Sherry Benedek.  Her chemistry with Zac (through the use of puppets) is excellent.  Benedek’s “There’s a Fine, Fine Line” effectively displayed pure emotion in one of the show’s more melodious numbers.

Roommates Nicky (Gavin Shown) and Rod, the closeted gay man (Josh Kemper), are also a great team.  Their performance of “If You Were Gay” was outstanding.

Another duo is Brian, an aspiring comedian (Keith Tittermany) and Christmas Eve (Erin Branigan) his eventual Japanese wife.  Branigan’s voice is golden and is the best vocalist in the cast.

Other characters added to the fun of Avenue Q.  One of them is Gary Coleman—yes, the actual late celebrity inserted in a fictional plot—played by Wil Lewis III.  His role is that  of a building superintendant and has some comical lines amidst the parody (he’s a large man compared to Coleman’s diminutive stature) but his performance was somewhat understated.  Nonetheless, Lewis’ solid baritone voice is on display in “Schadenfreude.”

Dean Davis as the porn-addicted Trekkie Monster, Beth Cohen and Cory Jones as the mischievous Bad Ideas Bears, and Sara Cobb as the seductress Lucy rounds out the loveable cast.  All do a great job in bringing their characters to life onstage with vigor. 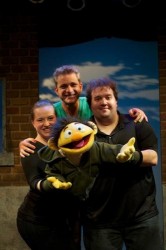 However, Zac Brightbill, playing the lead character Princeton, excelled well beyond his slim musical theatre resume would suggest.  His acting, comedy and vocal skills, while manning his puppet, were in evidence throughout.   The theatre major at University of Maryland, College Park, is a dominant performer.  (Area producers and casting officials: take note).  Brightbill’s versatility, should he pursue theatre as a career, offers great promise.

Dan Van Why’s imagination is evident in his clever set design.  Though the stage is small, the set is functional, and the actors fully use all available space.  The show plays big in a cozy theater.

And, of course, the puppets designed by Kathleen Sousa, were adorable.

The uniqueness and challenges that Avenue Q possess and the expert way that the elements are put together makes this show a must-see.  It is sheer joy with an uplifting message that is carried out by an award-winning director and talented cast and crew.

Advisory:  This show contains profanity, puppet nudity, and adult subject matter and is not appropriate for children.