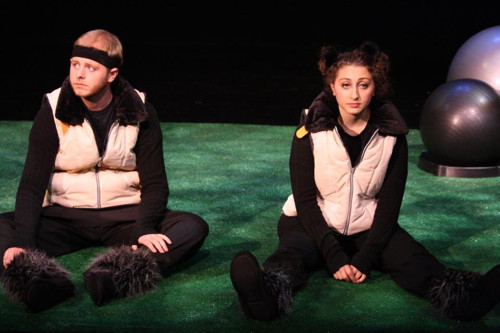 A panda wants to be a crocodile.  A crocodile wants to be a panda.  And there is cross-species lovemaking.  Wow!  This is an example of the type of the comical chaos in the hilarious Iron Crow Theatre Company’s 2012-2013 season kick-off, Bad Panda.

Written by playwright, monologist and songwriter Megan Gogerty, Bad Panda is making its world premiere on the Baltimore Theatre Project stage.  You knew this play promised to be some kind of quirky given Ms. Gogerty’s 2009 solo show had the title, Hillary Clinton Got Me Pregnant.

‘Bad Panda’ … It is fresh, cute, expertly-acted, well-directed, and despite the characters being animals, very human.

Veteran Iron Crow director Joseph W. Ritsch (Love and Human Remains, I Want to be a Gay Icon, Apartment 213) ably helms this enjoyable play with an unusual but endearing storyline. Bad Panda has only three characters: Gwo Gwo (David Basington), a male panda; Marion (Katie O. Solomon), Gwo Gwo’s mate; and Chester (Adam Cooley), a gay crocodile.  But these few characters through the force of Ritsch’s directing talents, and the actors’ skills take Gogerty’s clever plot and run with it.  The performers interact with each other so effectively and so amusingly that it is a lovely fulfilling experience.

We have Gwo Gwo and Marion, costumed simply but brilliantly by Rebecca Eastman, believing they are the last two pandas on earth and need to take advantage of the impending mating season (“It starts tomorrow”) to keep the species alive.  Marion is a panda who is ultra-determined to have a baby.  Experiencing difficulty with this basic exercise in life-production, Gwo Gwo encounters Chester who has other plans.  Without much subtlety, Chester expresses his physical attraction to Gwo Gwo and the fun begins.

Chester’s character is the most complicated of the three.  His feelings towards Gwo Gwo are both physical and emotional and began the day they first met (“I love the way you climb a tree and crawl into a ball.”).  When Marion discovers the emerging “gross”  relationship she remains resolute to prevent the species’ extinction.  Marion goes off to some mysterious place in the forest/woods/reserve (take your pick) to get a baby.

Marion returns with a baby panda but is unable to explain how that occurred biologically since Gwo Gwo, the other remaining panda, was not with her. She eventually bonded with Chester whereas before there was a clear adversarial relationship.  Chester grew to appreciate the cute little creature and helps to nurture it.  We’ll leave it there as surprises and twists complete the play. 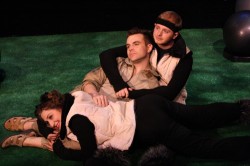 I was trying to figure out who of the three actors gives the best performance—Brasington, Solomon or Cooley.  In the end, the choice was clear: all of them excel.  Each brings their own interpretation and execution.  Each delivers comic lines (and there are more than just a few) with precise timing and body language.

The physical presentation is also unique given that humans are playing the roles of bears.  Just to remind the audience that they are, in fact, animals, on occasion the pandas would crawl around the floor and curl up in a ball.  The croc doesn’t replicate animal movements so much as it is indeed difficult to slither across a stage.  The physical and sexual actions bring smiles.

Yet their emotions and values are more reflective of humans.  Marion wants to have a baby and be a good mother.  She and Gwo Gwo want to prevent the species’ extermination.  Chester wants commitment rather than just having fun.  There is jealousy. They all have, in varying degrees, a sense of devotion to family.

The action takes place on one uncomplicated but effective set designed by Ritsch.  There are three fitness balls for the pandas to occasionally sit on or balance and a rectangular green carpet to denote grass.  A screen in the background shows bamboo and other fauna depending on the scene locale.

Iron Crow bills Bad Panda as a “sweet celebration of non-traditional families.” It is that and more.  It is fresh, cute, expertly-acted, well-directed, and despite the characters being animals, very human.

Advisory: This show contains sexual situations and is not suitable for children,