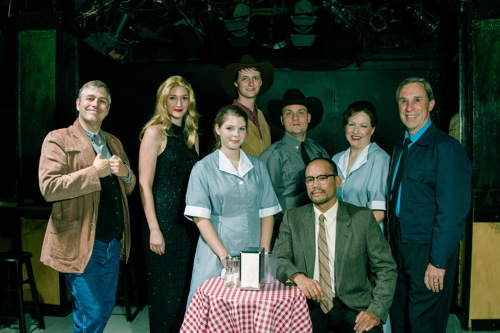 Grace’s diner, the focal point of William Inge’s Bus Stop (now playing at the Spotlighters Theatre), is like stepping into another world. Checkered tablecloths, old Coca Cola posters, floral patterned drapes, and the quaint, robin’s egg blue wallpaper, all contribute to the feeling that we’re not in Kansas anymore—well, not modern Kansas, anyway. This is 1955, just past midnight, 30 miles west of Kansas City, MO in the middle of a raging blizzard. Everyone—including an alcoholic nihilist philosopher (Jose Teneza), a kidnapped chanteuse (Cherie), a young, temperamental rancher (James Morton), and a flirty bus driver (Steve Izant)—coming off the 12:15 train from KC is stranded in this place until the roads clear. It’s going to be a long night, filled with music, revelation, and some serious thinking about the nature of real love.

The chemistry between Carole DeLisle’s Grace and Steve Izant’s Carl was probably the most realistic, funny, and charming thing on that stage…

I will say, set designer Alan Zemla and costume designer Laura Nicholson did so much to lend to the authenticity of this play. The Stetson hats, the frosted plastic glasses, the donuts on display in a glass case, and blue waitress uniforms made it all feel like looking into the past—only the colors and the live theatre told me I wasn’t watching something on TV from the I Love Lucy era. With regards to the set design, it is incredibly difficult to arrange an effective set for theatre in the round (as the Spotlighters stage is organized) but I never felt that I was missing anything crucial by sitting in one particular area. 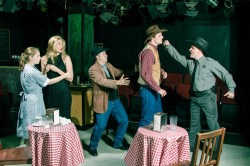 The fact that Bus Stop has a film adaptation starring the inimitable Marilyn Monroe, and a running history dating back to 1955 (including Spotlighters first 1962 production) makes it a difficult play to live up to, especially for the actors. There were a few lines with some flat delivery, but I’d chalk a large part of that up to a script from nearly sixty years ago.

The chemistry between Carole DeLisle’s Grace and Steve Izant’s Carl was probably the most realistic, funny, and charming thing on that stage, and Erin Hanratty’s heartbreaking naïveté as Elma made Dr. Lyman (Jose Teneza) seem downright creepy in his advances. Given that their scenes mainly consisted of a middle-aged thrice-married professor showering poetic compliments on a teenaged girl, this was spot on.

The interaction between Bo (James Morton) and his mentor Virgil (Robert Scott Hitcho) was also fascinating to watch—not only does Morton’s voice carry, but his bluster is a stark contrast with his apparent youth and lends quite a bit of empathy to the cowboy kidnapper. As Bo’s captive chanteuse Cherie, Rachel Verhaaren steps into the role Marilyn Monroe once played, and does a good job, though the resolution between Bo and Cherie seems a little shallow. 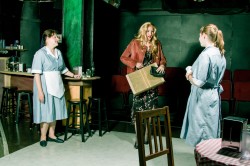 Cherie (Rachel Verhaaren-Ctr) rushes into the dinner, and asks “Is there anywhere I can hide?” of a surprised and confused Grace (Carole DeLisle-L) and Elma (Erin Hanratty-R). Photo by Ken Stanek Photography.

Bus Stop is a complicated play, with a lot of characters (admirably orchestrated by director Fuzz Roark), talking about big issues like love, sex, marriage, and idealism. If you would like, for the space of two hours, to step into a quainter, but no simpler time, this play is certainly cheaper, more entertaining, and more readily available than a time machine.

Running Time: 2 hours and 20 minutes with a 15-minute intermission.